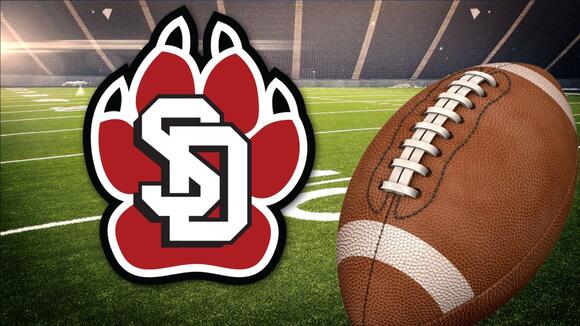 Todd Drummond, a 6-foot-4 quarterback at Pawhuska High School in Oklahoma, announced on social media he committed to play football at the University of South Dakota. In May, Drummond posted he received an offer from USD and Monday night, he announced his intention to play for the Coyotes. In April , Drummond also posted about a visit he had at South Dakota State.

On Twitter, Todd’s mother said “USD is such a perfect fit for him in every way. Congrats, Todd… and @SDCoyotesFB here we come! #GoYotes.”

Drummond is set to enter his senior season at Pawhuska.

The 2022 South Dakota State offense may be the best there's ever been in Brookings.
BROOKINGS, SD・1 DAY AGO
KELOLAND

‘I respect him like any of my coaches’: Athletic trainers at RHS

While football players are practicing their plays at Roosevelt High School, they are being closely monitored by the coach and Scott Roggenbuck, an athletic trainer from Sanford Health.
SIOUX FALLS, SD・9 HOURS AGO
KELOLAND

High School Football: The must see games of 2022

More than 50 different schools are featured on this year's list of must see games. Here's a look at the 92 games that you'll want to keep an eye on this fall
SIOUX FALLS, SD・1 DAY AGO
KELOLAND

Elk Point-Jefferson hopes to lean on experience in 2022

Elk Point-Jefferson reached the 11B state semifinals in 2021, following a 6-2 regular season. However, the Huskies season would come to a close with a loss to eventual state champion, Winner.
ELK POINT, SD・5 HOURS AGO

Howard adjusting to move up to 9AA

Howard capped off an undefeated state championship run with a 55-18 victory over Herreid/Selby Area to take home the 9A State Title.
HOWARD, SD・1 DAY AGO
KELOLAND

The South Dakota Class 'B' State Amateur Baseball Tournament continued Monday in Mitchell with second round action. Perennial power Alexandria clashed with Platte, and the Angels would score 3 runs in the final two innings to pick up the 4-3 victory.
ALEXANDRIA, SD・2 DAYS AGO
KELOLAND

After finishing runner-up in 2020, Dell Rapids St. Mary would return to the dome to claim the 9B State Championship in 2021. Now the Cardinals are preparing to defend their title in 2022.
DELL RAPIDS, SD・2 DAYS AGO
KELOLAND

WHITESTOWN, Ind. (KELO) – After leading 4-1 in the 6th and final inning of Friday’s matchup against Missouri, the South Dakota Little League team would ultimately lose by a final of 5-4… making Saturday’s matchup against Minnesota a win or go home scenario. They would dig themselves quite the hole after falling behind 4-0 in […]
SIOUX FALLS, SD・4 DAYS AGO

The Sioux Falls Little League team got off to a good start at the Midwest Regional of the Little League World Series.
SIOUX FALLS, SD・5 DAYS AGO
KELOLAND

MITCHELL, S.D. (KELO) – The South Dakota amateaur baseball association Class B state tournament began this past week and would continue Saturday with plenty of first round games in action. Cadwell Park was the scene as the Dell Rapid Mudcats did battle against the Northville Merchants. This game was all about the Mudcats pitching staff; […]
4 DAYS AGO
KELOLAND

The Sioux Falls Little League team is set to represent the state of South Dakota this weekend, when they play in the Midwest Regional of the Little League World Series.
SIOUX FALLS, SD・6 DAYS AGO

Mason Jacobson was an 18-year-old graduate of Harrisburg High School. He was preparing to play at the Minnesota State University in Mankato.
HARRISBURG, SD・6 DAYS AGO
KELOLAND

Here are Friday's results from across KELOLAND including scores from the South Dakota State Amateur Tournament.
SIOUX FALLS, SD・5 DAYS AGO
KELOLAND

The now-grown daughter of murder victim, Mary K. Ross, confronted her mother's killer in an emotional hearing before the SD Board of Pardons and Paroles.
SIOUX FALLS, SD・5 HOURS AGO

The month of August is here, which gives us a chance to look back at a busy July. Here's a look at the top five plays from July:
SIOUX FALLS, SD・6 DAYS AGO
KELOLAND

For the second year in a row, both slates begin the week before Christmas and will feature an 18-game, home-and-home mirrored schedule between the league's 10 men's and women's programs.
SIOUX FALLS, SD・7 DAYS AGO
KELOLAND

On Wednesday, teams from 11AAA to 11A and 9B came to Howard Wood Field for the KELOLAND Sports High School Football Media Day.
SIOUX FALLS, SD・7 DAYS AGO
KELOLAND

The Catfish Bay Water Ski Team is back on its home turf after competing in the Midwest Regional Show Ski Tournament.
SIOUX FALLS, SD・6 DAYS AGO