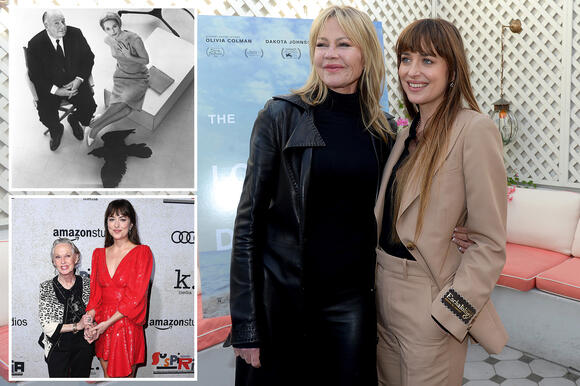 Dakota Johnson’s mom Melanie Griffith was in for a scare of a lifetime when she was gifted a macabre present from iconic director Alfred Hitchcock.

The “Fifty Shades of Grey” alum, 32, noted in a recent Vanity Fair profile that Hitchcock gave Griffith, now 64, a mini Hedren stuck in a small coffin as a toy for Christmas.

“What happened with my grandmother was horrific because Hitchcock was a tyrant,” Johnson said. “He was talented and prolific — and important in terms of art — but power can poison people.”

She noted that the traumatizing gift was “alarming and dark and really, really sad for that little girl” and “really scary.”

The “21 Jump Street” actress then looked back on the 2012 HBO drama, “The Girl,” which fictionalized the contentious relationship between the “Psycho” filmmaker and Hedren, 92, during filming of “The Birds.”

Johnson and her grandmother saw a private screening of the movie with the rest of their family.

“We sat at HBO, my family, and watched that movie together,” she said.

Johnson continued, “It was one of those moments where you’re just like, ‘How could you not have warned us?’ We’re in a room with some execs. Maybe this warranted a little conversation beforehand? You look over and you see a woman who’s just been reminded of everything she went through, and it was heartbreaking. She was an amazing actress and he stopped her from having a career.”

Hedren has previously discussed the tumultuous partnership she had with Hitchcock in the decades following their movies.

She penned in her 2016 memoir, “Tippi,” that the British auteur made her life a living hell after she refused his romantic pursuits. She even alleged that he sexually assaulted her and ruined her acting career.

As awards season accolades continue to pour in for the glitzy, surrealistic “Elvis” biopic, there’s no denying the all-too-true, tragic life and death of his little girl. A bombshell documentary — “TMZ Investigates: Lisa Marie Presley: Unending Tragedy” (airing Monday, Jan. 30 at 8 p.m. on Fox) — sheds new light on the superstar scion’s demise, with accusations of drug abuse, references to scarily rapid weight loss and mysterious insurance policies and claims of “fraud” and a “money grab.” Elvis Presley’s only child died of cardiac arrest at age 54 on Jan. 12. She is survived by her mother, Priscilla Presley, 77, her adult...
2 DAYS AGO
New York Post

Keanu Reeves has been granted a temporary restraining order against a man who claims that he is related to the actor. “The Matrix” star’s lawyer, Matthew Rosengart, submitted paperwork to a Los Angeles court on Tuesday to seek protection for Reeves and his partner, Alexandra Grant, against a man they claim has “been harassing them for months,” according to TMZ. Bryan Keith Dixon, the 38-year-old man in question, reportedly trespassed onto the actor’s $5.6 million Hollywood Hills property six times between Nov. 5 and Jan. 20. According to court docs seen by the outlet, Dixon attempted to make contact with the “John Wick”...
LOS ANGELES, CA・12 HOURS AGO
New York Post

Priscilla Presley’s forgotten son speaks out: ‘I became so addicted’ to fentanyl

With all the recent drama and tragedy around the Presley family following Lisa Marie’s death at age 54 last month, Priscilla’s second child, Navarone Garibaldi Garcia, has been forgotten — but now he’s speaking out.  Garcia, 35, is Lisa Marie’s half-brother, and is himself a musician, with a band called Them Guns.  Priscilla, 77, had Garcia in 1987 after her 1973 divorce from Elvis, with producer Marco Garibaldi.  Similar to Lisa Marie and her father, Elvis, Garcia revealed that he also struggled with drug addiction. According to People, he became addicted to heroin and fentanyl in his teen years.  “I was under the impression...
1 DAY AGO
New York Post

Bad Seeds frontman Nick Cave said he’s lost his “rage, anger, and hatred” after the death of his two sons. The rocker, 65, suffered an unimaginable loss when two of his children died in 2015 and 2022, respectively. Responding to a fan’s note in his Red Hand Files newsletter, the “Where the Wild Roses Grow” hitmaker said everything was flipped upside down after he got the devastating news. The fan’s message read: “When did you become a Hallmark card hippie? Joy, love, peace. Puke! Where’s the rage, anger, hatred? Reading these lately is like listening to an old preacher drone on and on at Sunday mass.” Cave’s...
2 DAYS AGO
New York Post

More insight into the late Princess Diana’s tumultuous marriage to King Charles has been revealed. Secret letters from the Princess of Wales sent to her friends detailing her “ugly” divorce from King Charles reveal just how painful the split was. Thirty-two letters penned to her pals Susie and Tarek Kassem are now up for auction, according to the Mirror. The money will be given to various charities that Diana, who died in 1997, had supported during her lifetime. The Kassems are putting the memos, estimated to sell for about $111,000, under the hammer on Feb. 16 with Cornwall-based Lay’s Auctioneers. One of the notes...
1 DAY AGO
New York Post

Sally Field reveals the two classic movies she turned down

Sally Field revealed that she shot down two iconic romance films over the course of her career — and she has no regrets. The “Steel Magnolias” star, 76, was almost going to appear in the 1996 comedy “The First Wives Club” and 1984’s “Romancing the Stone.” The Oscar winner revealed to People recently how “The First Wives Club” star Goldie Hawn begged her to be a part of the cast. “Goldie really wanted me to do it,” she said. “Maybe it would have been fun, but they were all so musical, and I’m not.” Field added: “And the movie wouldn’t have been the same.” The flick...
5 HOURS AGO
New York Post

Megyn Kelly said ousted “Good Morning America” anchors TJ Holmes and Amy Robach made a “massive PR error” in response to the public revelation of the affair that led to their exit at ABC. Kelly slammed the pair after photos emerged of Robach jumping into Holmes’ arms in a PDA-filled embrace in Los Angeles just hours after they signed exit agreements finalizing their departures from the network. “They don’t understand — no one looks at this and says ‘true love,’” the media personality said on Monday’s episode of “The Megyn Kelly Show” on Sirius XM radio. “They cheated on their spouses. They cheated...
1 DAY AGO
New York Post

Son of man whose ashes were sent to Brooklyn rocker: ‘Shame on them’

He says this funeral home was dead wrong not to call him! The son of a trucker whose cremated remains were mysteriously shipped to a Brooklyn indie rocker told The Post Thursday the funeral home that mailed them made an “outrageous” and “heartbreaking” mistake. “Shame on them,” Lamont Hall, 23, said after The Post tracked him down and told him about the bizarre mix-up. “To see his ashes misplaced like that is heartbreaking.” “That’s really shocking the way this was handled. They should have reached out,” he said. Hall said his father, Dwight Walter, was an affable trucker who loved vintage cars and died...
BROOKLYN, NY・19 MINUTES AGO
New York Post

Jeffree Star claims he exposed “insecure” NFL wives — referring specifically to Saryn Anderson, wife of Carolina Panthers defensive end Henry Anderson — as fans continue to try to identify his mystery “NFL boo.” Saryn allegedly messaged Star on Instagram, asking the 37-year-old makeup guru Tuesday to stop sharing cryptic pictures and clues about his new football-playing boyfriend because people apparently think it’s her husband. Carl Nassib of the Tampa Bay Buccaneers is the only openly gay player in the NFL, but he recently went public with his boyfriend, Danish Olympic swimmer Søren Dahl. Fans may be hypothesizing that Henry is the man standing with his back turned to...
1 DAY AGO
New York Post

Ozzy Osbourne was seen looking frail in his first outing since announcing his retirement from touring. In images captured by Fox News, the Black Sabbath frontman, 74, relied on the help of a cane as he walked from a parked vehicle to the entrance of a medical center in Los Angeles Wednesday. The singer was dressed in black pants and a black turtleneck underneath a long gray dress coat. He accessorized with several rings and a watch. The “Crazy Train” rocker appeared to be in good spirits despite pulling the plug on all of his upcoming shows in the UK and Europe just hours...
LOS ANGELES, CA・5 HOURS AGO
New York Post

Prince Harry won’t have the final say on “Spare” just yet. In response to his son’s bombshell memoir, King Charles III is said to be preparing to share his side of the story, according to a royal source. The British monarch, 74, will be the subject of a highly anticipated BBC profile ahead of his coronation on May 6. Insiders speculate that Charles could use the interview as an opportunity to discuss recent claims about the royal family made by the Duke of Sussex, 38, in his best-selling book. “Plans are already up and running for coronation coverage at the BBC, including the profile...
2 DAYS AGO
New York Post

Sarah Michelle Gellar finally confirmed the rumor that Dolly Parton was a producer on “Buffy the Vampire Slayer.” While appearing on “The Tonight Show,” Gellar, 45, told the world that the suspicions were true. “Little-known fact: The legend, Dolly Parton, was a producer,” Gellar told Jimmy Fallon, 48. Parton, 77, was an uncredited producer on the hit sci-fi series that ran for seven seasons from 1997 to 2003 — but the cast never got to see her.  “We never saw her. We’d get Christmas gifts in the beginning that would have her name, and I would think, ‘She doesn’t know who I am,’” Gellar,...
6 HOURS AGO
New York Post

‘This is 13 years of raising kids’: Mom makes shocking discovery inside couch

TikToker Kacie is a busy mum juggling four kids and running her own business, so the shocking discovery she made inside her sofa recently… kind of makes sense. As her family was rummaging around searching for the TV remote, they looked in all the usual spots including in between the cushions of the couch.  After no luck, they somehow landed on the conclusion that it must have fallen down the back of the couch.  And in a bizarre move – which we still don’t really understand – they decided to cut open the back of the sofa in order to look for the remote.  It begs the question...
2 DAYS AGO