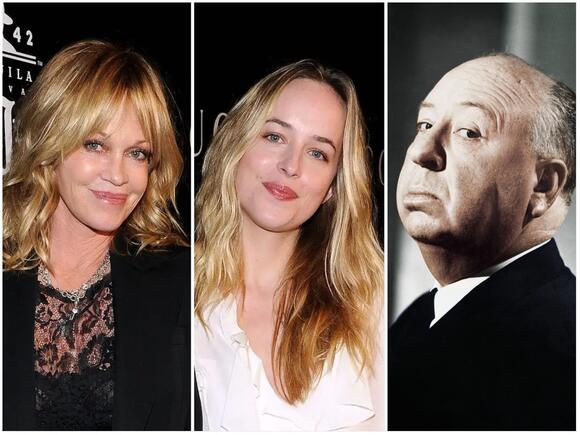 Dakota Johnson said that renowned filmmaker Alfred Hitchcock once sent a miniature of her grandmother, Tippi Hedren, in a coffin to the "Fifty Shades of Grey" star's mother, Melanie Griffith.

Hedren was famously Hitchcock's muse, appearing in his films "The Birds" and "Marnie."

However, in her 2016 memoir "Tippi," Hedren wrote that the filmmaker terrorized her for years after she rejected his advances. She also accused Hitchcock of sexually assaulting her and ruining her career by stopping other filmmakers from hiring her.

During an interview with Vanity Fair , Johnson said that her mother, Griffith, received the creepy mini coffin as a Christmas gift from Hitchcock when she was just a child.

"It's alarming and dark and really, really sad for that little girl," Johnson said. "Really scary."

Johnson added: "What happened with my grandmother was horrific because Hitchcock was a tyrant. He was talented and prolific — and important in terms of art — but power can poison people."

During the interview, Johnson also recalled attending a screening of the Emmy-nominated HBO movie "The Girl," which depicted Hitchcock's obsession with Hedren.

The actor said that neither she nor her grandmother, who attended the screening with Johnson, were warned about the movie's content.

"It was one of those moments where you're just like, 'How could you not have warned us?'" Johnson said. "We're in a room with some execs. Maybe this warranted a little conversation beforehand? You look over and you see a woman who's just been reminded of everything she went through, and it was heartbreaking. She was an amazing actress and he stopped her from having a career."

This is not the first time Johnson has spoken out about the famous filmmaker's obsession with her grandmother.

Last year, Johnson told The Hollywood Reporter's "Awards Chatter" podcast that Hedren encouraged her and Griffith to stand up for themselves after her struggles with Hitchcock.

"She's always been really honest and firm about standing up for yourself. That's what she did," Johnson said. "Hitchcock ruined her career because she didn't want to sleep with him, and he terrorized her. He was never held accountable."

Johnson added: "It's hard to talk about because she's my grandmother. You don't want to imagine somebody taking advantage of your grandmother."

Salma Hayek Pinault said Channing Tatum had to hold on to her pants to stop her from landing on her head while working on "Magic Mike's Last Dance."
1 DAY AGO
People

Priscilla Presley's Son Navarone Garcia Breaks His Silence: 'People Know About Me, But They Don't Know Me'

The musician discusses life with his famous mom, his recovery from fentanyl addiction and discovering the truth about the background of his father, producer Marco Garibaldi, in this week's PEOPLE Aside from having his mother's eyes, Navarone Garibaldi Garcia isn't immediately recognizable as the son of actress Priscilla Presley, the 77-year-old ex-wife of Elvis. "A lot of people know about me," the musician tells PEOPLE in this week's issue, on newsstands Friday. "But they don't know me." Though he remained largely out of the spotlight growing up, Navarone, 35, says his lineage...
9 HOURS AGO
Insider

"Everything blurred, like it was happening in slow motion," Anderson wrote, adding, "I felt like I died that night, too."
1 HOUR AGO
Insider

In a new interview with Esquire, Kutcher spoke about him and Kunis reprising their roles as Michael Kelso and Jackie Burkhart on "That '90s Show."
WISCONSIN STATE・1 DAY AGO
Insider

Rupert Grint reveals he had tonsillitis from the fourth Harry Potter film through the end of the franchise: 'There was never any time to get them out'

Rupert Grint spent his adolescence filming the Harry Potter films, in which he played Ron Weasley, and filming didn't allow for his tonsil removal.
2 DAYS AGO
Insider

Lawyers for Elvis Presley's ex-wife argue there are many issues surrounding an amendment made to her daughter's will, including an unusual signature.
TENNESSEE STATE・1 DAY AGO
Insider

Lisa Loring, the original actor who played Wednesday Addams in 'The Addams Family,' has died at the age of 64

According to her friend Laurie Jacobson, Loring experienced a "massive stroke" and was on life support for three days.
CALIFORNIA STATE・2 DAYS AGO
Insider

Rupert Grint, who is currently starring in "Knock at the Cabin" and "Servant," wanted to "fight against" expectations for child stars.
1 DAY AGO
Insider

Finn Wolfhard said he realized that by the time season five of "Stranger Things" comes out, he and some of his costars will be of drinking age.
47 MINUTES AGO
Insider

In "Anne Rice's Mayfair Witches," the actor plays a neurosurgeon who learns she's a descendant of witches and wields a secret, lethal power.
1 HOUR AGO
Insider

Lily Collins wished her dad, Phil Collins, a happy birthday on Instagram with a series of photos of them in matching outfits and poses

Her Instagram post featured a picture of herself wearing a sparkly blue gown and striking a pose in a bathtub, reminiscent of her father's.
NEW YORK STATE・1 DAY AGO
Insider

Shania Twain says her near-death experience with COVID-19 was like 'science fiction': 'I felt like I was going to another planet'

"I felt like I was going to another planet or something," Shania Twain said of her COVID experienc. "It all kind of happened in slow motion."
1 DAY AGO
Insider

Finn Wolfhard says he started having panic attacks as a teenager on 'Stranger Things,' but didn't 'talk about anything' because he didn't feel like there was time

Finn Wolfhard said that he started experiencing panic attacks as a teenager, including at times on the set of "Stranger Things."
2 HOURS AGO
Insider

Rupert Grint said that the constant cycle of filming and promoting the Harry Potter films was "an out-of-body experience for a while."
1 DAY AGO
Insider

Gellar told "The Tonight Show" that she didn't think the country superstar watched "Buffy" but once "complimented the show and my performance."
8 HOURS AGO
Insider

The 10 best movies coming to Netflix in February

Check out all "The Lord of the Rings" movies, "Call Me By Your Name," and the Netflix rom-com "Your Place or Mine."
12 HOURS AGO
Insider

Brendan Fraser reflected on his years of filming, revealing that self-loathing caused him to accept the pain and injuries caused from stuntwork.
2 DAYS AGO
Insider

Julia Louis-Dreyfus, Eddie Murphy, and Sam Jay all worked on "Saturday Night Live" before they starred together in "You People."
3 HOURS AGO
Insider

'Proud Family: Louder and Prouder' creators say Keke Palmer called them and 'gangstered' her way into a role

"The Proud Family" creators Bruce W. Smith and Ralph Farquhar said that the "Nope" star told them they had to give her a role in the revival series.
2 DAYS AGO