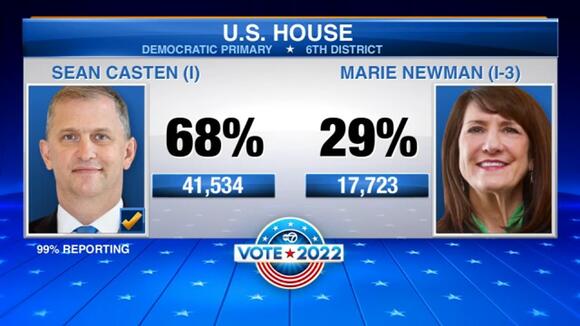 While Casten easily won Tuesday night, that may not be the case in November. Republicans are very anxious to flip the 6th District back to red. In 2018, Casten was the first Democrat in the district to beat a Republican in decades.

Newman, a progressive Democrat, is a first-term congresswoman who beat conservative Democrat Dan Lipinski two years ago. It hasn't been a smooth term for Newman, who is under a House ethics investigation for an alleged political bribe. She denies any wrongdoing and does not believe that had any impact on the election.

Newman spoke about the need for Democrats to come together in her concession speech Tuesday night.

"I just got off the phone with Congressman Casten, and I congratulated him on winning his race," Newman said. "While this is not the result we wanted, we now have to unite. And I know that's going to hurt a little for some folks, but I really need you to do it."

The Casten campaign decided to not hold a watch party Tuesday night. The congressman has stayed out of the public eye ever since the death of his teenage daughter.

Gwen Casten was found dead in her bedroom more than two weeks ago. A cause of her death has not been announced, but her family said it appeared that she died in her sleep.

Casten mentioned his family's loss in a written statement Tuesday night: "First and foremost, thank you. I ran for Congress in 2018 because I think that there's an awful lot more that unites us than divides us. That felt like a naive thing to say at the time. After all, the 6th District hadn't voted for a Democrat in 50 years. In the conversations I had with folks across the district, I found that we have a shared set of values, and voters wanted someone in Congress who would not only stand up and fight for those values, but live up to them. The 6th District is full of people who trust science, believe in democracy, and know that we are only as good as the world we leave to our children. We flipped the 6th District in 2018 because of the hard work of the thousands of volunteers who knocked on doors, made phone calls, and did everything they could to show the country what the values of the 6th District truly were. Then, in 2020, we rejected racism and bigotry and chose science, compassion, decency, acceptance, and love. Tonight, the people of the 6th District sent a resounding message. We have been given a mandate to continue our fight against the climate crisis, to end gun violence, to lower costs for families, and to protect every woman's right to make her own health care decisions. To all who helped make tonight possible-thank you. Every door you knocked, call you made, yard sign you put out, or postcard you sent propelled us to victory. You have a lot to be proud of, and you deserve to celebrate. To the voters-since 2018, you have given me a tremendous amount of trust to represent your values in Congress. For this, I am forever grateful, and you can expect more town halls and accessibility from my office. To all who have reached out in recent weeks with their condolences, prayers, support, and love, my family and I are forever grateful. More than anything else, thank you to all who participated in this election. You are the reason democracy works."

If he is re-elected in 2024, Donald Trump is going to take “revenge” against his political antagonists, federal officials and even former allies like Florida governor Ron DeSantis, according to Mr Trump’s niece Mary Trump.On a Friday episode of her podcast The Mary Trump Show, Ms Trump interviewed New York University historian Ruth Ben-Ghiat, and the pair agreed that strongmen-style leaders like Mr Trump who find themselves in legal jeopardy will often continue to seek power to punish their enemies and avoid punishment themselves.Ms Ben-Ghiat believes the former president will take special umbrage with Mr DeSantis, the most successful...
FLORIDA STATE・1 HOUR AGO
TheDailyBeast

Virginia Gov. Glenn Youngkin is less than a year into his governorship, but he’s already making moves to be the GOP’s next presidential nominee.His political style tries to have it both ways. He aims to be sufficiently middle-of-the-road in a crucial purple state, while also playing the culture-war hits to win over the MAGA base.But it simply might not be possible to be the “Goldilocks candidate”—serving porridge that’s neither too hot nor too cold—in the 2024 Republican primary.Campaigning with election deniers and cracking down on transgender kids have gotten the headlines, but the term-limited governor, who campaigned in a “Daddy...
VIRGINIA STATE・24 MINUTES AGO