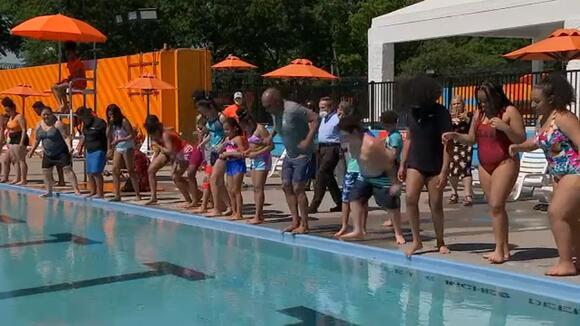 New York City opens its pools to the public Tuesday, even though it still has half of its lifeguard positions open to fill. That means swim programs and water aerobics are canceled, but the pools are open. The Parks Department prepped 51 city pools to open Tuesday, and they'll remain open through September 11 every day from 11 a.m. to 7 p.m., with an hour break from 3 p.m. to 4 p.m. But you can expect changes due to the massive lifeguard shortage. The city says they will evaluate the staffing situation on a daily basis and if needed, they will limit capacity or in a worst-case scenario, close some pools that don't have enough staffing. "I wish that there was a junior lifeguard program," lifeguard Janet Fash said. "I wish that the high schools were more involved in the recruitment of lifeguards for the future." Mayor Eric Adams says recruiting efforts continue. "We're still leaving no stone unturned," he said. "We have a couple of creative ideas we are going to put in place to deal with this national problem. I want to always emphasize that, this is a national problem that we're facing." The shortage means that for the second year in a row, the city's "learn to swim" program is canceled. The mayor says one idea is to loosen the requirements to boost the lifeguard ranks so they can reopen those swim classes. ALSO READ | Experts urge swim lessons, water safety to prevent child drownings

As more local pools and parks are re-opening from pandemic shutdowns, the American Academy of Pediatrics is urging families to provide swim lessons.

A temporary "humanitarian relief center" will be built in the Bronx for asylum seekers, but advocates say the location and shelter are problematic
NEW YORK CITY, NY・2 HOURS AGO
ABCNY

A first-of-its-kind bill will be introduced to New York City Council this week that would prohibit discriminating against people based on their tattoos.
NEW YORK CITY, NY・4 HOURS AGO

The family of a boy with autism named Austin in Georgia asked strangers to send him cards for his ninth birthday after no one showed up to his previous birthday parties.
GREAT NECK, NY・1 DAY AGO
ABCNY

Everything at the iconic NYC hotel must go -- that includes the smallest items and the most grand.
NEW YORK CITY, NY・1 DAY AGO
ABCNY

Police said many of the kids wouldn't have the opportunity to visit the museum and it was a great educational opportunity.
NEW YORK CITY, NY・1 DAY AGO

There are additional calls to improve mass transit after the COVID-19 pandemic, and advocates rallied in Brooklyn Sunday to urge Governor Kathy Hochul to make subways and buses run at least every six minutes.
NEW YORK CITY, NY・2 DAYS AGO
ABCNY

Flames and a large plume of smoke broke out on the roof of the building on 10 South Street just before 4 p.m.
MANHATTAN, NY・2 DAYS AGO
ABCNY

New York leaders are teaming up to help both Puerto Rico and the Dominican Republic in this time of need.
NEW YORK CITY, NY・1 DAY AGO
ABCNY

Thousands participated in the event, which retraces Stephen Siller's final footsteps from the Hugh L. Carey Tunnel to the World Trade Center on 9/11.
NEW YORK CITY, NY・1 DAY AGO

"One minute they tell us it's not arsenic and then they have other vendors that gave the results back to us and said it was arsenic," Riis Tenants Association President Daphne Williams told the council.
NEW YORK CITY, NY・3 DAYS AGO
ABCNY

The Feast of San Gennaro in Little Italy ends Sunday with a meatball-eating contest.
MANHATTAN, NY・2 DAYS AGO
ABCNY

NYC deployed a team of approximately 12 members to Puerto Rico Thursday to aid in relief efforts following Hurricane Fiona as President Biden promised to cover 100% of the cleanup for the next month.
NEW YORK CITY, NY・4 DAYS AGO
ABCNY

A team of WABC-TV employees, including station General Manager Marilu Galvez, joined together to walk and run in solidarity as a team Sunday at a rally to beat brain cancer in honor of former News Director Rehan Aslam
NEW YORK CITY, NY・2 DAYS AGO
ABCNY

Two centers will open in the coming weeks. Orchard Beach will open first, serving adults, and a second location is still being finalized.
NEW YORK CITY, NY・4 DAYS AGO
ABCNY

Officials have been investigating an outbreak of Legionnaires at the Amsterdam Nursing Home in Morningside Heights.
MANHATTAN, NY・4 DAYS AGO
ABCNY

'The shortest tour of all time': This may be New York City's smallest apartment

It measures just 80 square feet, or about the size of a parking spot, and is said to be the smallest unit available in the city.
NEW YORK CITY, NY・4 DAYS AGO
ABCNY

Christopher Garcia, who was found on a basketball court with a gunshot wound to his torso, was well known for giving back in the community.
HOBOKEN, NJ・18 HOURS AGO