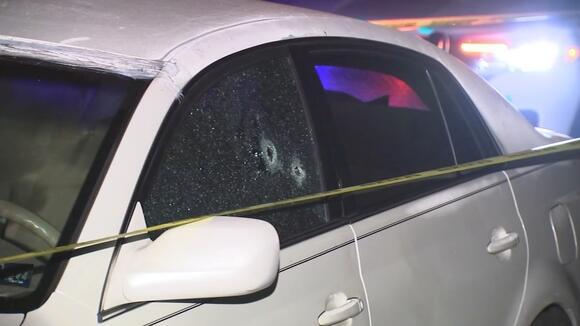 Police say an off-duty corrections officer turned the tables during a carjacking late Monday, opening fire on the suspect in Philadelphia's Olney section. The 59-year-old corrections officer had just left a friend's house when he was carjacked along the 200 block of East Roosevelt Boulevard at about 11 p.m., police said. The man told police he got into his Toyota Avalon, and before he knew it, a man wearing a surgical mask and hoodie pulled him out of the car at gunpoint and got in. That's when police said the corrections officer grabbed his weapon and fired off five shots toward the suspect, who then sped away.

The man told police he got into his Toyota Avalon, and before he knew it, a man wearing a surgical mask and hoodie pulled him out of the car at gunpoint.

"Police officers, within about 20 to 25 minutes, located the Toyota Avalon about a half a mile away in the 4900 block of Bingham Street. That vehicle was found with five bullet holes in it and also a lot of fresh blood inside the driver's seat, and some on the center console," said Philadelphia Police Chief Inspector Scott Small. The bullets went through the driver's side window, the door and the front windshield. Police said a short time later, a man showed up at Temple University Hospital with gunshot wounds to both of his arms. They believe he may be the person responsible for the robbery and carjacking. "There's a possibility that that 21-year-old shooting victim may be the individual that committed this robbery carjacking," Small said. The corrections officer was not injured during the carjacking. The investigation is ongoing.

Wouldn’t they just need to check the DNA to prove the guy that showed up @ Temple is the carjacker? I mean the article stated there was blood in the car

A juvenile was killed and a pregnant woman injured after violent night in Philadelphia.
PHILADELPHIA, PA・1 HOUR AGO
6abc Action News

The investigation began back on August 6 when Washington Township officers were called to a dispute inside an apartment on Woodmont Circle.
GLOUCESTER COUNTY, NJ・17 HOURS AGO
6abc Action News

The same suspect was apparently responsible for carjacking someone else just a few blocks from the shooting scene.
PHILADELPHIA, PA・2 DAYS AGO

"The device is designed to detain a person without harm who is a threat to themselves, the officer or the community," said Chief David Splain.
NETHER PROVIDENCE TOWNSHIP, PA・20 HOURS AGO
6abc Action News

Norristown Police are investigating a deadly crash involving a motorcyclist

Action News has confirmed that at one person has died in the wreck.
DELAWARE COUNTY, PA・5 HOURS AGO
6abc Action News

At least 20 shots were fired during a double shooting in West Philadelphia.
PHILADELPHIA, PA・4 DAYS AGO
6abc Action News

2 killed in fiery crash on I-95 in Newark, Delaware

The 37-year-old male driver of the BMW and his 27-year-old male passenger were pinned inside the vehicle, police said.
NEWARK, DE・1 DAY AGO
6abc Action News

Police say the shooting happened on the 600 block of Moores Lane in the Colonial Village Apartments complex.
NEW CASTLE, DE・3 DAYS AGO