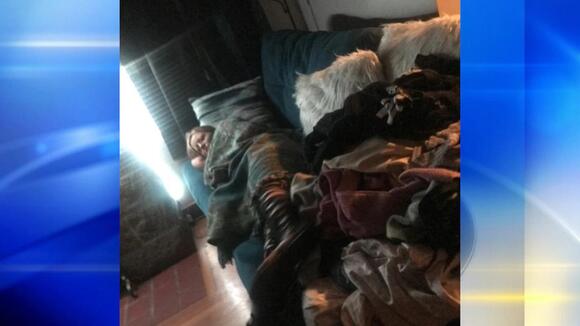 Coraopolis police have charged a woman after they say she allegedly broke into a home and slept on a couch.

Early Sunday morning, Tenesha Fisher tells Channel 11 that she fell asleep watching TV in her living room, but when she woke up, she discovered that she wasn’t alone.

“I look and there is really a little white girl laying on my couch,” said Fisher.

Fisher captured a picture of the intruder sleeping just feet away on her clean laundry and wrapped in her aunt’s funeral blanket.

Coraopolis police identified the woman as an intoxicated Kelly Bridger. Bridger told police her grandmother once lived in Fisher’s home.

“You know, it’s not Grammy’s house and there is a big Black woman asleep, right here by herself,” said Fisher.

“Sometimes when you slam it, it doesn’t go all the way,” said Fisher.

Fisher tells Channel 11 that to make matters worse, Bridger has taken to social media to make light of what was a scary situation for her and her daughter, who was home during the time of the incident.

“She is making it seem like it’s OK because her grandmother lived here. You don’t walk in people’s houses,” said Fisher.

Bridger has been charged with criminal trespass.

Her 17-year-old daughter was declared dead. Despite hospital objections, she believes she was alive

An Indianapolis woman whose 17-year-old daughter suffered a severe allergy and asthma attack at work and was pronounced brain dead days later was faced with a harrowing predicament: let the hospital remove her daughter from life support or block it and find another facility willing to take her before then.
INDIANAPOLIS, IN・3 DAYS AGO
hotnewhiphop.com

Back in April, we reported on the stabbing of Christian Obsumeli. The 27-year-old passed away from the injuries which were brought on by his girlfriend, OnlyFans model, Courtney Tailor. Although the fatality happened months ago, Courtney has just now been apprehended for her heinous actions. A few days ago, the...
PUBLIC SAFETY・1 DAY AGO