Missing in Utah: $100,000 reward now being offered in disappearance of Dylan Rounds 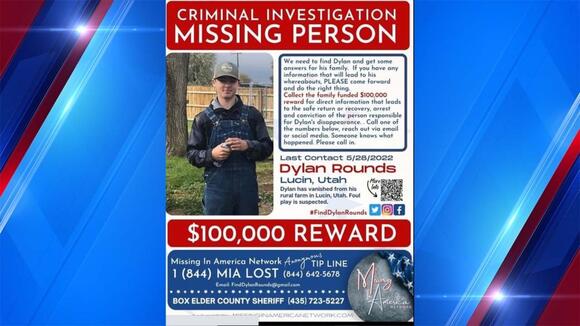 SALT LAKE CITY ( ABC4 ) – Dylan Round’s family is now offering a $100,000 reward for information that can lead to his whereabouts.

Rounds disappeared nearly a month ago. He operated a farm near the town of Lucin in western Box Elder County.

BEES ESCAPE: Semi truck hauling over 200 beehives crashes on I-80

He was last heard from on May 28 when he called his grandmother. His mother is growing frustrated with the lack of progress.

“Stuff like this doesn’t happen without people knowing,” said Candice Cooley. “They’re just not talking. Somebody tell us something. We have no direction right now.”

On Memorial Day weekend, his family arrived at the farm. They found his truck. It hadn’t been moved but his mother found it odd that it had been power washed.

Cooley believes it’s the information they uncovered from the outset. She also said the FBI has joined the investigation.

“Somebody is finally listening to what Justin and I had to say,” she said.

The family increased its reward from $20,000 to $100,000. They’re seeking any information that can lead them to Dylan and to hold those responsible for his disappearance. A private investigator believes something bad has happened to Dylan.

“Something of a foul play has happened to Dylan,” said Jason Jensen. “There’s no reason (for him to disappear). He was excited to be farming there. His crop was about to come to fruition for the first time. So he was excited.”

He is currently being held in the Davis County Jail on unrelated charges. He’s a fugitive from Montana.

But Jensen said it’s too early to cross this person off.

“Unless they (law enforcement) can prove this individual had nothing to do with this,” Jensen said.

Authorities in Box Elder County did not return calls from ABC4. Meanwhile, Dylan’s mom hopes the reward can lead to the tip they need.

“Somebody knows and it’s more than one somebody,” she said. “I think it’s multiple people that know what happened to Dylan, but nobody’s talking.”

Anyone with information about Dylan’s disappearance is urged to contact the family through their Facebook page. The Box Elder County Sheriff’s Department also has a Facebook page.

PLEASANT GROVE, Utah (ABC4) – Gracelyn Wilkinson was a teenager when she stepped on exposed live wires — and her life was changed forever. She was shocked. Since then, she’s needed open chest surgery, a kidney autotransplant — and she’s spent long stretches in the hospital. “Gracelyn is on a feeding tube, has been for […]
UTAH STATE・2 DAYS AGO
ABC4

MESQUITE, Nev. (ABC4) – Two female fugitives from Salt Lake County were arrested Thursday after police received a tip stating that the women were possibly staying in Mesquite, Nevada. Erika Rochelle Vigil, 31, of Magna was arrested along with 28-year-old Sherri Lee Vigil of Salt Lake City. Detectives followed up on the tip they initially […]
MESQUITE, NV・3 DAYS AGO

UTAH (ABC4) – A temporary ban on target shooting has been activated on 25 Utah wildlife areas due to continuing wildfire concerns. The Utah Department of Wildlife Resources (DWR) says temporary restrictions on recreational target shooting with a firearm will be effective beginning Friday.  DWR hopes the ban will decrease the risk of wildfires being […]
UTAH STATE・2 DAYS AGO
ABC4

Man shot and killed by police near Utah state border

WASHINGTON COUNTY, Utah (ABC4) – An officer-involved shooting occurred on Wednesday near the Utah and Arizona Stateline, according to St. George Police. At approximately 7:21 a.m., Utah Highway Patrol received a call of a suspicious vehicle in the Port of Entry on I-15 northbound near the Stateline. Troopers arrived at 7:38 a.m. and located an […]
SAINT GEORGE, UT・4 DAYS AGO
ABC4

The IUP Panel on abortion access and the Inflation Reduction Act

SALT LAKE CITY (ABC4) – The Department of Justice is challenging the new abortion law in our neighboring state of Idaho. Representative Carol Spackman Moss (D), Holladay, and Senator Todd Weiler (R), Woods Cross, weigh in on the move as part of our Inside Utah Politics Panel discussion.
IDAHO STATE・1 DAY AGO
ABC4

To date this year, more than 440,000 callers have sought help from the hotline — up about a third from the same period last year.
UTAH STATE・4 DAYS AGO

UTAH (ABC4) – Utah’s rate of violent crime rate is notably lower than the national average, except in one category — rape.  Utah is one of the top ten states with the highest number of rapes per capita. This is just one of the many findings from the Utah State University’s Utah Women and Leadership […]
UTAH STATE・4 DAYS AGO
ABC4

SALT LAKE CITY (ABC4) – Happy weekend Utah! Today will be a tale of two different states. In northern Utah, there will be scattered showers and thunderstorms as a system moves through, while southern Utah gets mostly sunny to partly cloudy skies.  In northern Utah, the best chance for storms will come from mid to […]
UTAH STATE・2 DAYS AGO
ABC4

UTAH (ABC4) – It’s no secret that Utah is home to some of the best cookie shops in the nation. Whether your favorite shop is a small, hole-in-the-wall joint or a popular nationwide chain, Utahns have no shortage of choices when it comes to America’s favorite portable dessert. While the classic chocolate chip cookie was […]
UTAH STATE・2 DAYS AGO
ABC4

SALT LAKE CITY (ABC4) – Privacy concerns are top of mind for many Americans, and Representative John Curtis (R), Utah, is sponsoring a bill to address it. He joins us on Inside Utah Politics this week to discuss that and other issues he’s working on in the nation’s capital.
UTAH STATE・1 DAY AGO

FARMINGTON, Utah (ABC4 Sports) – Rookie Andrew Kozan made five birdies on the back nine en route to an 8-under 63 and his first career Korn Ferry Tour victory, winning the Utah Championship at Oakridge Country Club in Farmington. Former BYU stars Patrick Fishburn and Peter Kuest both had turned in their highest finishes ever […]
FARMINGTON, UT・11 HOURS AGO
ABC4

Dry start to the workweek, but moisture is coming

SALT LAKE CITY (ABC4) – It was a very mixed bag this last weekend as we saw flood warnings (and some actual flooding) on Saturday and then a very dry and calm Sunday. Like they say in the weather business, when it rains, it pours. Dry and stable conditions with seasonable temperatures will persist through […]
SALT LAKE CITY, UT・4 HOURS AGO
ABC4

The best things to do in Utah in August

UTAH (ABC4) – As we embark on the new month, we prepare for summer to come to a close, as it does annually on August 31. With this in anticipation, we’re prompted to think about how we can best maximize the last few days we have left of summer. To help, ABC4 has compiled the […]
UTAH STATE・4 DAYS AGO
ABC4

Museums, Music & Movies. That's the title of this week's episode of Jessop's Journal, a 30-minute collection of powerful, positive and inspirational stories and music that airs this Sunday morning at 10 on ABC4 TV.
UTAH STATE・2 DAYS AGO
ABC4

Wet start likely for the weekend here in Utah

SALT LAKE CITY (ABC 4) - We have been seeing a steady flow of moisture coming into the state yesterday and it's looking like going to be hanging around northern Utah for the next few days.
UTAH STATE・2 DAYS AGO
ABC4

Diversity and Inclusion in Mental Health in Utah

SALT LAKE CITY (ABC4) – The conversation surrounding mental health continues to grow, not just in Utah but across the country. One of those conversations surrounds racism and the impact it has on mental health. Newly appointed Chief Executive administrator for justice, equity and inclusion at Huntsman Mental Health Institute, Dr. William Smith stopped at […]
UTAH STATE・2 DAYS AGO
ABC4

Scattered storms across the state

SALT LAKE CITY (ABC4) – Happy Friday, Utah, we have made it to the end of the workweek! Moisture started to really move in on Thursday and that will continue to be a theme on Friday. This will result in a good chance for scattered showers and thunderstorms for the western, central, and northern half […]
UTAH STATE・3 DAYS AGO
ABC4

SALT LAKE CITY (ABC4) – Happy Friday Eve, Utah! Thursday will bring some changes to our weather as moisture starts to surge back into the Beehive State! This is due to a high pressure shifting to the southeast, allowing for more of a southwesterly flow. The moisture will make it first to southern Utah where […]
UTAH STATE・4 DAYS AGO