Courtney Vandersloot comes through again late for the Sky vs Lynx 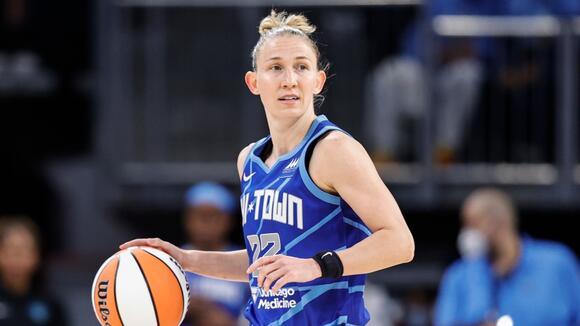 CHICAGO – Seeing No. 22 on the floor for the Sky hasn’t been a good thing for the Lynx in 2022, especially when time is ticking down.

That was the case on Sunday when Courtney Vandersloot sent Minnesota to defeat with some last-second heroics that earned the guard an honor from the WNBA.

Tied with time ticking down at Wintrust Arena, Vandersloot got open on the wing and knocked down a three-pointer to give the Sky an 88-85 victory. The guard jumped around for joy in celebration with her teammates while the stunned Lynx stared on from their bench.

Vandersloot’s shot finished off her team-high 18-point evening and helped the Sky to a third-straight win. That vaulted them ahead of the Sun for second place in the WNBA standings as they now sit 1 1/2 games behind the Aces for first place.

This is the second time that Vandersloot has helped the Sky beat the Lynx with her play in the final minute. On May 14th, she scored five points in the final 38 seconds of the game to help the team to an 82-78 win in Minneapolis.

This effort along with the ones in wins over Las Vegas and Los Angeles earned Vandersloot the WNBA’s Eastern Conference Player of the Week for the seventh time in her career.

During the three games, Vandersloot averaged 19.3 points, five assissts, and 3.3 rebounds a game, including a season-high 25 points in the comeback win over the Aces. The guard is now averaging 12.6 poins and 6.7 assists per contest, with the latter ranking second in the WNBA.

Tim Anderson won’t return to the White Sox in 2022

All-Star shortstop Tim Anderson won't return to the team for the rest of the 2022 season as he continues to recover after surgery on his left hand.
CHICAGO, IL・3 DAYS AGO
WGN News

Cubs, fans honor female baseball legends, ‘League of their Own’ and their impact on the sport

CHICAGO — A special event was held at Wrigley Field Thursday to commemorate the 30th anniversary of the classic baseball movie “A League of their Own” and recognize a former All-American Girls’ Professional Baseball League player. Several cast members of the 1992 film were on hand to celebrate the anniversary. Actress Tracy Reiner played betty […]
CHICAGO, IL・1 DAY AGO
WGN News

Jason Heyward plans to keep on playing, even if not with Cubs

CHICAGO — Jason Heyward plans to play next season, even if won’t be with the Chicago Cubs. Heyward hasn’t been in a game since June 24 because of right knee inflammation. The 33-year-old outfielder hit .204 with one home run and 10 RBIs in 137 at-bats, and he has one season left in a $184 […]
CHICAGO, IL・1 DAY AGO
WGN News

Five-time All-Star DeMar DeRozan talked about how he handles those who doubt his abilities as he enters his 14th NBA season and his second with the Bulls.
CHICAGO, IL・23 HOURS AGO
WGN News

CHICAGO — In the weeks and months before Donald Patrick was arrested for allegedly infiltrating the Chicago Police Department’s Homan Square facility, his estranged wife was sounding alarms about his behavior. On Aug. 11, the woman, a Wisconsin resident, filed for an emergency restraining order against Donald. In her application, the woman told a judge […]
CHICAGO, IL・2 DAYS AGO
WGN News

UPDATE (9:13 p.m.) — A man was arrested in connection to a West Peoria double homicide Thursday. According to an update from the Peoria County Sheriff Chris Watkins, 34-year-old Rickey J. Payne was arrested for two counts of first-degree murder, aggravated unlawful use of weapons, possession of a firearm by a felon, aggravated discharge of […]
WEST PEORIA, IL・2 DAYS AGO
WGN News

WARNING: Viewer discretion is advised due to the graphic nature of the story. WEST PEORIA, Ill. (WMBD) — Details have emerged after Quadreka S. Payne, 32, and her 8-year-old son Cael Thornton were found shot to death in West Peoria Thursday morning. Prosecutors revealed in court Friday that 34-year-old Rickey J. Payne, who was arrested Thursday […]
WEST PEORIA, IL・20 HOURS AGO

CHICAGO — A construction worker was was robbed and shot In West Englewood Thursday afternoon. A 42-year-old man was working on a construction site at the 5700 block of South Paulina Street around 12:26 p.m. when an unknown person approached him, displayed a handgun and demanded his belongings, police say. According to officials, the man, […]
CHICAGO, IL・1 DAY AGO
WGN News

CHICAGO — Chicago police have arrested a person in connection with an attack and robbery on the CTA Red Line. A man was attacked and robbed by two people early Sunday morning a the Red Line train near 95th Street. Police said 30-year-old Solomon Washington of Chicago Heights was arrested Wednesday in connection to the […]
CHICAGO, IL・1 DAY AGO
WGN News

MARKHAM, Ill.— Two people were killed and one is in serious condition in a four-way car crash that resulted in an explosion Friday night in Markham, police say. According to officials, a person in a dodge charger was travelling at high speed on 159th street near the I-294 Markham overpass, jumping the curb which resulted […]
MARKHAM, IL・5 HOURS AGO
WGN News

CHICAGO — Quavon Ewing is accused of attacking three women in the span of 45 minutes one day after he appeared in a Cook County Court on a different charge and was released on nothing more than his signature and a promise to return to court, according to prosecutors. Ewing is now charged with attempted […]
CHICAGO, IL・2 DAYS AGO

As Jason Heyward prepares to leave the Cubs, #WGNTBT reflects on his incredible catch that he made at Wrigley Field during Game 5 of the 2016 World Series.
CHICAGO, IL・1 DAY AGO
WGN News

CHICAGO — A man was stabbed and killed in West Englewood early Thursday morning. A 57-year-old man was stabbed in the torso by a known individual on the 1500 block of West 72nd Street around 12:47 a.m. in a domestic-related incident, police say. The man was transported to the University of Chicago Medical Center where he […]
CHICAGO, IL・2 DAYS AGO
WGN News

The Blackhawks have two exhibition games this week, including their first game in Milwaukee in 30 years on Sunday against the Wild.
CHICAGO, IL・21 HOURS AGO
WGN News

SB Nation writer Ricky O'Donnell discusses the outlook for the team, the Lonzo Ball injury, the team's keeping of their core together, and more with Larry Hawley on this edition of the show on WGN News Now.
CHICAGO, IL・1 DAY AGO

EVANSTON, Ill. — Shannique Shelton recalls a moment from 15 years ago as if it happened 15 seconds ago. The Chicago teaching assistant was pregnant and had just completed her first ultrasound when the doctor abruptly left the room. When he returned, he had the image, and several concerns. “He goes, ‘Ms. Shelton?’ I said, […]
EVANSTON, IL・14 HOURS AGO
WGN News

Sampson finished his day by getting Mike Siani to ground into a double play, stranding a runner at third.
CHICAGO, IL・19 HOURS AGO
WGN News

CHICAGO — A woman is dead and four suspects are in custody after a carjacking spree ended with a police chase and crash. According to police, four offenders exited a stolen pickup truck and committed an armed carjacking on a 65-year-old woman in the 3400 block of South Claremont around 6:55 p.m. Wednesday. Police said […]
CHICAGO, IL・2 DAYS AGO
WGN News

CHICAGO — What were you doing when you were a junior in high school? Chances are, probably not representing your ancestors in the world’s biggest baseball tournament, but that’s exactly what this 17-year-old junior from Lane Tech High School is about to do. Amaan Khan — a right-handed pitcher for Lane Tech — will be […]
CHICAGO, IL・2 DAYS AGO