Teen charged after hit-and-run outside U of I bar 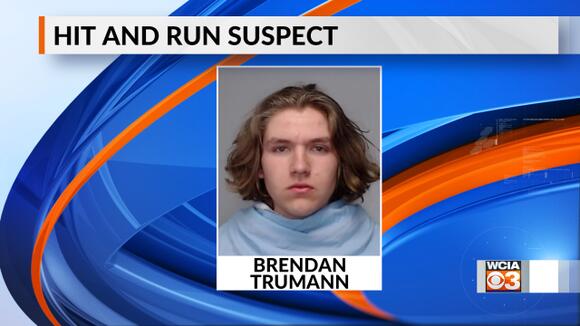 CHAMPAIGN, Ill (WCIA) — A Savoy teenager was charged with three felonies on Monday following a hit-and-run incident on the University of Illinois campus that went viral on social media.

19-year-old Brendan Trumann was charged on one count each of Aggravated Reckless Driving, DUI and Leaving the Scene of a Personal Injury Accident. Champaign County State’s Attorney Julia Reitz said that Trumann had no prior criminal record and faces a maximum of 22 years in prison if convicted. Bond was set at $600,000 and a preliminary court hearing was scheduled for July 20.

Champaign Police said that Trumann was kicked out of Joe’s Brewery, located near Fifth and Green Streets, just before closing time at 2 a.m. on Sunday morning for causing a disturbance. As he was told to leave, Trumann pulled out what appeared to be a handgun and pointed it at others, at which point Police were called. Trumann then got into his Dodge Challenger and started driving erratically in front of the bar.

The victim of the eventual hit-and-run, a 20-year-old man from Gibson City, approached Trumann’s car. Police said the victim and Trumann knew each other and the victim may have been trying to calm Trumann down.

Then a fight broke out. Reitz said that another person hit the victim’s head from behind, knocking him to the ground, and that person began punching the victim’s face. Trumann sped away from the scene, running over the victim twice in the process. The victim was still lying in the street when Police arrived minutes later; he is still in the hospital and there is no further information on his condition.

Reitz said that after leaving Joe’s, Trumann crashed his Charger in Mount Hope Cemetery near Sixth Street and Pennsylvania Avenue, damaging several headstones. Officers found the car abandoned with a realistic-looking BB gun inside. Trumann was later found walking in the parking lot of his apartment complex with visual signs of impairment. He admitted to driving the car.

The investigation into this incident is ongoing; the third person who started the fight with the victim has yet to be identified.

Champaign Police asks that anyone with information about this incident call them at 217-351-4545; arrangements can be made for information t be shared privately. Anyone wishing to remain anonymous can submit information to Crime Stoppers by calling 217-373-8477, vising Crime Stoppers’ website or by using the P3 Tips app.

He’s not 21 why was he at joe’s… then it comes back that they could tell he was impaired… so this bar was serving him? Then he gets in a car and runs someone over ? If I was this kids mom I would be all over joes brewery..

Where was he getting his alcohol from. He ain’t old enough to be getting served in a bar? 🤔

CHAMPAIGN, Ill. (WCIA) — Champaign County Crime Stoppers needs help finding a man who walked into a store and started punching an employee because they refused to sell him alcohol. Green Street Pantry employees say he appeared to be intoxicated when he walked into the store. They say he got upset when workers told him they […]
CHAMPAIGN COUNTY, IL・1 DAY AGO
WCIA

(UPDATE) This story was edited to reflect the correct time this incident occurred after clarification from police. DANVILLE, Ill. (WCIA) — Danville Police officers said a woman was hurt after a weekend shooting. In a news release, officials stated crews were called around midnight Saturday to the area of East Fairchild Street and Garfield Place. […]
DANVILLE, IL・1 DAY AGO
WCIA

CHAMPAIGN, Ill. WCIA — The Champaign Police Department enlisted support from neighboring law enforcement agencies this month in its latest effort to curb “unlawful” and “criminal” activity downtown. Police expected larger crowds in the summer months, Lt. Andre Davis said, but in reality, “we’re seeing crowds that are larger than we even anticipated.” This is […]
CHAMPAIGN, IL・1 DAY AGO
WCIA

DECATUR, Ill. (WCIA) — A teenager from has been arrested following a domestic violence situation early Sunday morning. Decatur Police received a report of the situation around 1 a.m. and dispatched officers to a house located near Calhoun and Main Streets. Inside, they found a 43-year-old woman with a head injury and immediately rendered medical […]
DECATUR, IL・2 DAYS AGO

Update at 2:07 p.m. on 8/14/2022 Macon County Coroner Michael Day has identified the victim as Arrion L. McClelland. An autopsy conducted on Sunday indicated that he died from a penetrating gunshot wound to the head. Decatur Police are still investigating and are treating this as a homicide. DECATUR, Ill. (WCIA) — A man is […]
DECATUR, IL・2 DAYS AGO
WCIA

CHAMPAIGN, Ill. (WCIA)– The Champaign Police said they responded to a large gathering outside of an apartment complex around 3:55 a.m. on August 13. CPD said they arrived to the intersection of 100 South Third and South Fourth Streets, to a report of a fight at a large gathering. Officers said upon arrival they observed […]
3 DAYS AGO
WCIA

Victory Over Violence: How A Mother And Son Gives Kids An Opportunity To Participate In A Car Show

CHAMPAIGN, ILL. (WCIA) – Curbing violence in Central Illinois takes multiple solutions. It’s not easy to do, but one mother and son duo is taking it upon themselves to overcome that challenge. Together, Burnette Lowe and her son Conterrio Brown came up with an idea to run a car show, and has been doing so […]
CHAMPAIGN, IL・21 HOURS AGO
WCIA

CHAMPAIGN, Ill. (WCIA) — Firefighters are known for running into the face of danger, but their greatest health risk is heart disease. Experts said it’s the leading cause of death in firefighters. Champaign Fire Department Battalion Chief John Hocking recently had a close call. Hocking said he had...
CHAMPAIGN, IL・10 HOURS AGO

Farmer City, Ill., (WCIA) — One town is now one step closer to solving a months-long problem. Farmer City now has two new trucks for their public works department. A fire destroyed their public works garage in February. They lost all five trucks and other equipment in that fire.
FARMER CITY, IL・14 HOURS AGO
WCIA

CHAMPAIGN, Ill. (WCIA) — Construction crews contracted by the City of Champaign will be shutting down one lane of a residential street in Champaign on Wednesday as part of the city’s 2022 Concrete Street Improvement Project. Western Avenue will become a one-way, northbound-only road between Chevy Chase Drive and Normandy Drive starting at 7 a.m. […]
CHAMPAIGN, IL・15 HOURS AGO
WCIA

DECATUR, Ill (WCIA) The Decatur Police are investigating vandalism in the downtown area of Decatur. On August 12 at 5:35 a.m. the DPD said they received reports of vandalism. During the investigation, DPD took a 38-year-old man in custody after locating him at Central Park. Officers said they arrested the man for damaging property at […]
DECATUR, IL・4 DAYS AGO

URBANA, Ill., (WCIA) — Peoria Charter is now back to regularly driving thousands of University of Illinois students to and from the Chicagoland area. This week, many are moving back to the U of I campus for the start of the semester. Over 5,000 students bought Peoria Charter tickets.
URBANA, IL・13 HOURS AGO
WCIA

THOMASBORO, Ill. (WCIA) — Firefighters from more than 10 fire protection districts were called to Thomasboro early Sunday morning to battle a large farm shed fire. Thomasboro Fire Chief Paul Cundiff said the building was a total loss with a large loss of equipment inside, but firefighters were able to prevent the fire from spreading […]
THOMASBORO, IL・1 DAY AGO
WCIA

SHELBYVILLE, Ill. (WCIA) — A Shelbyville man was found guilty on Thursday to a pair of charges related to a domestic disturbance. Jeremy Taylor, 45, was found guilty of armed violence (a Class X felony) and possession of methamphetamine with a prior conviction (a class 3 felony) following a jury trial. Shelby County State’s Attorney […]
SHELBYVILLE, IL・5 DAYS AGO
WCIA

BLOOMINGTON, Ill. (WCIA) — The McLean County Coroner has identified a woman who was found dead inside a car in Bloomington on Tuesday. Dr. Kathleen Yoder identified the woman as 46-year-old Brittany Mitchell of Normal. Mitchell was found inside a car that was parked in the area of Font Street and Morris Avenue; she was […]
BLOOMINGTON, IL・5 DAYS AGO
WCIA

WATSEKA, Ill. (WCIA) — Iroquois County board members are asking for accountability amidst an investigation into the county’s Public Health Director, and as State Troopers were present at the Health Department on Tuesday. State Police are investigating Dee Schippert in connection to what board members said is overtime...
IROQUOIS COUNTY, IL・9 HOURS AGO
WCIA

CHAMPAIGN, Ill. (WCIA) — A new event is coming to Champaign County next month that will provide both entertainment and charity. The inaugural Champaign County Balloon Festival is planned for Sept. 23 and 24 at Dodds Park in Champaign. There will be a group balloon launch with up to 16 participating balloons per day along […]
CHAMPAIGN COUNTY, IL・14 HOURS AGO
WCIA

Village of Ivesdale under boil order

IVESDALE, Ill. (WCIA) — The Village of Ivesdale in Champaign County is under a boil order as of Monday afternoon. Village Administrator James Brewer said the order is the result of a water main break. The order will be in place until further notice. This is a developing story.
1 DAY AGO
WCIA

CHAMPAIGN, Ill. (WCIA) — Coffee & tea lovers, you will have another place to enjoy your sips! Officials with Espresso Royale said they are setting up shop at 604 E. Daniel Street in Champaign. That is near the shop’s old location, which closed in May 2019. “We are working hard to get this new location […]
CHAMPAIGN, IL・1 DAY AGO