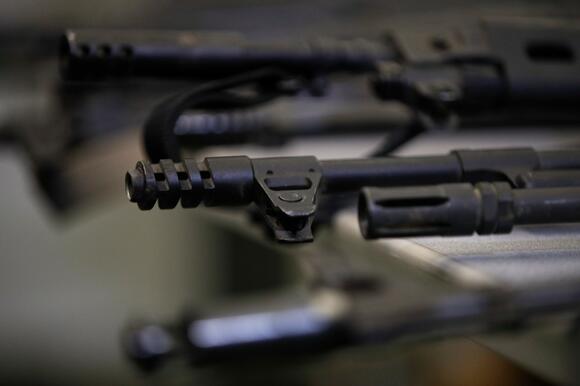 BECKLEY, WV (WVNS) – Two more pleas have been made following the federal indictment against 13 people allegedly involved in trafficking guns from Southern WV to Philadelphia .

A federal indictment consisting of 19 charges against 13 different people was made in March. The case involved the conspiracy to traffic more than 130 guns from Southern West Virginia to Philadelphia, PA. According to Thompson, suspects from Philadelphia recruited people in Southern WV to make straw purchases of guns from shops around the region. Straw purchasing is when someone legally buys a gun without revealing the true identity of the final purchaser, who otherwise could not buy a gun legally.

Derrick Woodard, also known as “D,” 26, of Philadelphia, pleaded guilty to interstate travel with the intent to engage in dealing firearms without a license. Stephanie Cohernour, 33, of Fayetteville, pleaded guilty to making false statements in acquisition of firearms.

According to court information, Woodard admitted to traveling to Beckley with Bisheem Jones, also known as “Bosh,” and several other co-defendants on October 17, 2020, to obtain firearms with plans to resell them for profit in Philadelphia. Cohernour admitted to straw purchasing firearms in Beckley for Jones, and that through an intermediary Jones provided the money for her to buy the firearms and told her which ones to buy.

Cohernour admitted to buying a Glock Model 19 Gen 5, 9mm pistol and a Glock, Model 19X, 9mm pistol for Jones on April 12, 2021. Cohernour admitted to lying on the Bureau of Alcohol, Tobacco, Firearms and Explosives (ATF) Federal Firearms Transaction Records Form 4473 when she certified that she was the buyer of the firearms, knowing she was purchasing the firearms for someone else.

Co-defendants Arileah Lacy, also known as “Leah,” and Terri Lawhorn previously pleaded guilty to making false statements in acquisition of firearms. The case remains pending against Jones and four other co-defendants. An indictment is merely an allegation and all defendants are presumed innocent until proven guilty beyond a reasonable doubt in a court of law.

NEAR YOU: The smartest states: where does WV stand?

United States Attorney for the Southern District of WV Will Thompson made the announcement and commended the ATF’s investigative work in the case.

PIPESTEM, WV (WVNS)–A drum gathering in Summers County welcomed people from all over the East Coast to the Appalachian South Folklife Center. It was organized by the Women of the East Drum Gathering and Mother Earth Beat. Through drumming, it became a lifeline for them to practice healing with their family. One of their goals […]
PIPESTEM, WV・7 HOURS AGO
WVNS

FAIRLEA, WV (WVNS)– One booth at the State Fair is raising money for charity and changing lives with donations from fairgoers. The Shriners Booth under the grandstand is raising money for the Shriners Children’s hospital. It’s one of the biggest fundraisers of the year for the organization. Donations from events like the State Fair of […]
MONROE COUNTY, WV・6 HOURS AGO
WVNS

PANTHER, WV (WVNS) – A woman from McDowell County was arrested for second degree murder after another woman was shot at a home in the Panther area of McDowell County. According to the criminal complaint, on Monday, August 8, 2022, Angelia Dotson, of Panther, was sitting in a car in the driveway of the home. […]
MCDOWELL COUNTY, WV・3 DAYS AGO
WVNS

FAYETTE, WV (WVNS) — According to Fayette County Sheriff Mike Fridley, a Smithers man is facing felony charges for Possession with Intent to Deliver Narcotics. In a press release from the Fayette County Sheriff’s Department, deputies decided to carry out a search warrant at a home in Smithers where the property owner was suspected of […]
5 DAYS AGO
WVNS

FLAT TOP, WV (WVNS)– The 91st Annual Lilly Reunion, which started Friday at Ghent, will be the last August reunion, organizers said Friday, Aug. 12, 2022. The State Fair of West Virginia competes with the reunion, which is Friday, Saturday and Sunday. “We’re going to try getting away from the week when the fair starts,” […]
GHENT, WV・1 DAY AGO

Oldest Catholic church in WV to host social on Aug. 15

SWEET SPRINGS, WV (WVNS) – The oldest standing Catholic church in West Virginia will be hosting an ice cream social to honor its age on Monday, August 15, 2022. Built in 1839, the church served as a family church for the late Governor of VA, John Floyd, whose daughters attended Catholic schools in Washington, D.C., […]
SWEET SPRINGS, WV・4 DAYS AGO
WVNS

WHEELING (WTRF) – A Wheeling woman was arrested after a Kid Rock concert at the Pavilion at Star Lake. Hanover Police say they responded to a fender bender, and multiple people at the concert pointed to a Kia, saying that the car damaged multiple vehicles. Those at the concert say the woman was going in […]
MCDOWELL COUNTY, WV・3 DAYS AGO
WVNS

FLAT TOP, WV (WVNS)–One local family reunion returned to the Mountain State for a weekend of fun. The 91st annual Lilly Family Reunion came back to the border of Mercer and Raleigh County in Flat Top. This reunion is packed with events for the family all weekend. It included true Lilly family members, their spouses, […]
FLAT TOP, WV・7 HOURS AGO
WVNS

BECKLEY, WV (WVNS) — West Virginia lawmakers are looking for ways to attract business to the state, and one way is by asking voters for permission to amend the State’s Constitution. One of the amendment on the November 8th ballot, Amendment Two, has Raleigh County Commissioners and those in other counties worried about public schools […]
RALEIGH COUNTY, WV・2 DAYS AGO

BERWIND, WV (WVNS)–A civil lawsuit is filed in federal court against the McDowell County sheriff’s deputies. In the suit, two deputies are accused of multiple civil rights violations, racial profiling, and harassment among other claims. The claims stem from an incident that reportedly happened on Friday, August 7th, 2020 in the Berwind area of McDowell […]
MCDOWELL COUNTY, WV・5 DAYS AGO
WVNS

Three $20,000 scholarships to be given to West Virginia students

CHARLESTON, WV (WOWK) — For the 20th anniversary of the Smart529 Scholarship, three students will be given a $20,000 scholarship to be put towards their education. State Treasurer Riley Moore was with students and faculty of Piedmont Elementary School in Charleston to launch the sweepstakes. In a packet given to 13 News, the scholarship gives […]
CHARLESTON, WV・3 DAYS AGO
WVNS

FAYETTE COUNTY, WV (WVNS) — One man is in the hospital after a reported accidental shooting, according to Fayette County Sheriff Mike Fridley.   At approximately 7:30 p.m. on Sunday, August 7, 2022 deputies went out to the Gatewood Rd area to respond to an accidental firearm discharge that left one man with non-life threatening injuries. […]
FAYETTE COUNTY, WV・6 DAYS AGO
WVNS

RALEIGH COUNTY, WV (WVNS)– In 2019, Congress passed a bipartisan law that made animal cruelty a federal crime. The law gives local prosecutors and police more power to keep animals safe. Those who cause serious harm to an animal may face up to seven years in prison under the federal code. Animal lovers in Raleigh […]
RALEIGH COUNTY, WV・5 DAYS AGO
WVNS

BLUEFIELD, WV (WVNS)– The highly anticipated Graham Beaver game is almost here and events will soon be kicking off across the Two Virginias. A pep rally and tailgating are just some of the exciting things happening in Tazewell and Mercer Counties. Rick Showalter, Director with the City of Bluefield Parks and Recreation Department said they […]
BLUEFIELD, WV・2 DAYS AGO
WVNS

TAZEWELL COUNTY, VA (WVNS) — Officers with the Richlands Police Department responded to a call at Richlands High School on Saturday, August 6, 2022, at 7:22 p.m. One man was asked to leave Ernie Hicks stadium, as staff reportedly said the man was intoxicated. They also noticed he had a gun with him while inside […]
RICHLANDS, VA・6 DAYS AGO
WVNS

BLUEFIELD, VA (WVNS)–A local hair salon and academy is giving out back-to-school hair cuts for the rest of the month. The Lady Project Salon and Academy next to The Grind in Bluefield will help children get ready for the school year with a new hairdo — free of charge. Students from Pre-K all the way […]
BLUEFIELD, VA・2 DAYS AGO
WVNS

BECKLEY, WV (WVNS)– As kids prepare for school and sports to start, some said on Friday, August 12, 2022, that they are not prepared for summer to end. “It just feels like the summer went by too fast,” said Ceayra Scott of Beckley, who brought her nephew, Nizere Sheppard to the Raleigh County Convention Center […]
BECKLEY, WV・1 DAY AGO