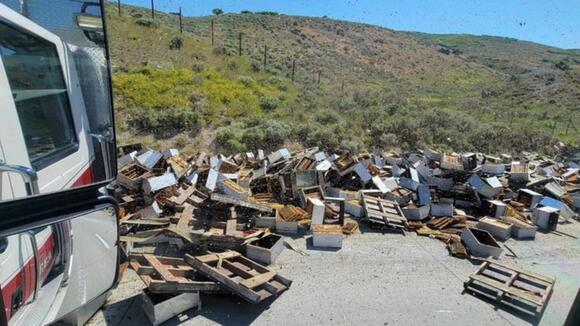 SUMMIT COUNTY, Utah — At least two people were injured after a semi-truck hauling over 200 beehives turned over in Utah on Monday.

According to the Park City Fire District, crews have been on the scene of a semi-truck that rolled over, carrying hundreds of beehives. Two people have been transported to a hospital with multiple bee stings and other minor injuries.

“Every effort is being made to save as many bees as possible,” said PCFD.

According to KSL-TV, the Historic Union Pacific Rail Trail has been closed in the area due to all the bees and crews have also minimized traffic in the area. Crews expect it take a few hours to clear the scene.

The cause of the crash has not been released, according to KSL-TV.

Woman dies after being impaled by beach umbrella in South Carolina

GARDEN CITY, S.C. — A woman has died after she was impaled by a beach umbrella in South Carolina Wednesday afternoon. According to WBTW, at around 12:40 p.m. on Wednesday, winds at a Garden City beach were picking up and it carried an umbrella. The Horry County Chief Deputy...
GARDEN CITY, SC・2 DAYS AGO
Boston 25 News WFXT

NORTH WHITEHALL TOWNSHIP, Pa. — A Pennsylvania teenager died Tuesday after he was pulled into a woodchipper, authorities said. Isiah Bedocs, 17, of Coplay, was working for a commercial tree company when a piece of debris he was placing into the woodchipper snagged his clothing and partially pulled him into the commercial-grade machine, WCAU-TV reported.
LEHIGH COUNTY, PA・2 DAYS AGO
Boston 25 News WFXT

Police: Shoplifter caught with thousands of dollars worth of over-the-counter medications

NORTH ATTLEBORO, Mass. — An alleged shoplifter was caught in North Attleboro with thousands of dollars worth of over-the-counter medications, police said. Namor Clarke, 30, of New York City, was arrested early Wednesday morning after a clerk at a CVS in North Attleboro called 911 to report a robbery, The Sun Chronicle reported.
NORTH ATTLEBOROUGH, MA・2 DAYS AGO
Boston 25 News WFXT

Louisiana man convicted of 2 murders, given life without parole, is released from prison

BATON ROUGE, La. — A Louisiana man who was convicted of murdering two people in 1979 and was given life without parole has been released from prison. The Louisiana Board of Pardons and Parole voted 2-1 on Monday to release David Chenevert from prison, according to The Associated Press. Chenevert had previously agreed to life in prison after pleading guilty to stabbing Michael Brown, 26, and Evelyn McIntyre, 18, in 1979. Brown was his roommate and McIntyre was a friend.
2 DAYS AGO

Naomi Judd’s family have filed a petition in court to seal the police reports and recordings from her death investigation. According to the Associated Press, the family filed the petition requesting that records that have video or audio interviews with Naomi’s relatives during the aftermath of her death are to not be released.
TENNESSEE STATE・22 HOURS AGO
Boston 25 News WFXT

A judge overseeing the second trial of two men accused of conspiring to kidnap Michigan Gov. Gretchen Whitmer took steps Friday to keep a lid on a defense lawyer's concerns about whether a juror will be fair. U.S. District Judge Robert Jonker said any subsequent court filings about the issue...
MICHIGAN STATE・1 DAY AGO
Boston 25 News WFXT

Judge revives Obama-era ban on coal sales from US lands

ALBANY, N.Y. — A New York woman pleaded guilty to stealing more than $240,000 in pension benefits issued to her deceased mother, prosecutors said Tuesday. According to a news release from State Attorney Letitia James, Cynthia Rozzell, of Hempstead, pleaded guilty in Albany County Court to second-degree grand larceny. She also must make restitution for the $240,000 she collected between May 2014 and May 2020, the release stated.
HEMPSTEAD, NY・2 DAYS AGO

RENO, Nev. — (AP) — As officials in some parts of rural Nevada vow to bypass voting machines in favor of hand counting ballots this November, the Nevada secretary of state’s office is proposing statewide rules that would specify how to do it, including requiring bipartisan vote counters, room for observation and how many ballots to count at a time.
NEVADA STATE・21 HOURS AGO
Boston 25 News WFXT

BOISE, Idaho — (AP) — Idaho's strict abortion bans will be allowed to take effect while legal challenges over the laws play out in court, the Idaho Supreme Court ruled Friday. The ruling means potential relatives of an embryo or fetus can now sue abortion providers over procedures...
IDAHO STATE・18 HOURS AGO
Boston 25 News WFXT

BATON ROUGE, La. — (AP) — The need for Louisiana to replace its voting machines is not in dispute. They are badly outdated — deployed in 2006, the year after Hurricane Katrina struck -- and do not produce paper ballots that are critical to ensuring election results are accurate.
LOUISIANA STATE・5 HOURS AGO
Boston 25 News WFXT

WASHINGTON — (AP) — Sen. Kyrsten Sinema, the Arizona Democrat who single-handedly thwarted her party’s longtime goal of raising taxes on wealthy investors, received nearly $1 million over the past year from private equity professionals, hedge fund managers and venture capitalists whose taxes would have increased under the plan.
ARIZONA STATE・13 HOURS AGO

Fetterman 'grateful' as he returns to Pa. Senate race

ERIE, Pa. — (AP) — Pennsylvania Senate candidate John Fetterman acknowledged he was lucky to be alive as he officially returned to the campaign trail Friday, more than 90 days after the Democrat suffered a stroke that threatened his life and political prospects in one of the nation's premier Senate contests.
PENNSYLVANIA STATE・18 HOURS AGO
Boston 25 News WFXT

Kansas to recount abortion vote by hand, despite big margin

TOPEKA, Kan. — (AP) — Kansas’ elections director says the state will go along with a request for a hand recount of votes from every county after last week’s decisive statewide vote affirming abortion rights, even though there was a 165,000-vote difference and a recount won’t change the result.
KANSAS STATE・18 HOURS AGO
Boston 25 News WFXT

Beto O'Rourke responds to heckler over Uvalde with expletive

AUSTIN, Texas — (AP) — Democrat Beto O'Rourke responded to a heckler at a campaign stop with an expletive after the Texas gubernatorial candidate heard a cackled laugh while criticizing the ease with which the Uvalde elementary school gunman legally purchased an AR-15-style rifle. By Thursday, video of...
UVALDE, TX・2 DAYS AGO
Boston 25 News WFXT