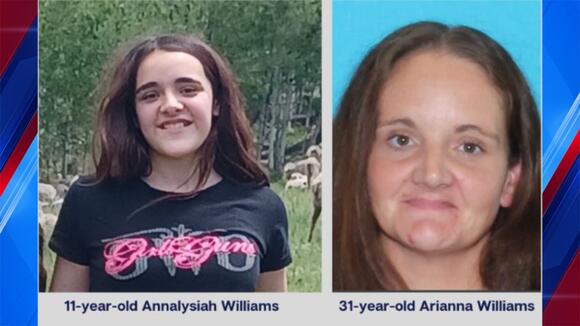 SALT LAKE CITY (ABC4) – An AMBER Alert for an 11-year-old girl abducted out of Salt Lake City has now been found safe.

“We were just made aware that Annalysiah was found safe and is with law enforcement in Tooele County,” says Salt Lake City Police (SLCPD).

The conditions surrounding her discovery were not immediately available.

SALT LAKE CITY (ABC4) – An AMBER Alert has been issued for a child abducted out of Salt Lake City on Monday.

Salt Lake City Police (SLCPD) are searching for 11-year-old Annalysiah Williams who was taken by 31-year-old Arianna Williams. Officials say Arrianna is the biological mother of Annalysiah, but does not have legal custody of the girl.

The investigation started around 11:16 a.m. on Monday, when SLCPD received reports of a possible custodial child abduction near 400 North 1100 West.

Arianna is described as 5-feet-3 inches tall, weighs 140 pounds with brown hair and brown eyes. It is unknown what she was last seen wearing.

Police say Arianna does not have a permanent home, and has been known to go to shelters in Murray, Spanish Fork and Orem. She is also known to use TRAX as her primary means of transportation.

Anyone with information on the location of the pair should call 911.

This story will be updated as more information becomes availabl e.

SOUTH SALT LAKE, Utah (ABC4) – Have you seen this man? South Salt Lake Police are searching for a “porch bandit” caught on video snatching a delivery package from a stranger’s front porch. Police say the theft occurred on Friday, Aug. 5 around 3 p.m. Footage of the theft was caught on the homeowner’s digital […]
SOUTH SALT LAKE, UT・3 HOURS AGO
ABC4

Police search for teen who ran away from Layton treatment center

LAYTON, Utah – Police are searching for a missing teenager out of Layton, Utah after she allegedly ran away from a treatment center in the area of 2000 West Gordon Avenue on Thursday. Layton City Police Department (LCPD) says that Natalee, 16, ran away from the treatment center on August 4 around 6:45 p.m. According […]
LAYTON, UT・1 DAY AGO
ABC4

Suspect identified after stealing excavator and tearing up Smith’s lot

SALT LAKE CITY (ABC4) – A man who allegedly stole a $400,000 Excavator from a construction site, drove it down city streets, and used it to tear up a Smith’s parking lot in Salt Lake City was booked into jail on Saturday on several charges.  Omar Otega, 46, is facing two counts of Criminal Mischief […]
SALT LAKE CITY, UT・19 HOURS AGO
ABC4

MURRAY, Utah (ABC4) – Police are searching for a man who’s been missing from Murray since Wednesday around 12 p.m. Victor Acosta Duran was last seen on Wednesday at the Murray Post Office, according to police. He was last seen wearing blue jeans, a gray shirt, black running shoes, and a blue cap. He is […]
MURRAY, UT・2 DAYS AGO
ABC4

TAYLORSVILLE, Utah (ABC4) – A Taylorsville man is behind bars after police say he stabbed his roommate in the eye with a broken piece of a glass meth pipe. The incident happened on Thursday in the area of 5000 South Scarsdale Court in Taylorsville. According to arresting documents, the suspect, 45-year-old James Griggs, began to […]
TAYLORSVILLE, UT・2 DAYS AGO

Four more people have been arrested for their involvement in the death of a 16-year-old who died following an altercation Monday
LINDON, UT・3 DAYS AGO
ABC4

SALT LAKE CITY (ABC4) – The Salt Lake City Police Department (SLCPD) released a timeline today providing additional information on the agency’s response to the homicide of Ryan Outlaw that occurred in the fall of 2020.  In November of 2020, Fernanda Tobar, 22, was arrested on suspicion of murder in the stabbing death of her […]
SALT LAKE CITY, UT・2 DAYS AGO
ABC4

SANDY, Utah (ABC4) – Have you seen these women? Sandy Police are searching for two women for their alleged connection to a Costco theft.  The women were caught on surveillance camera footage inside the store.  If you recognize these women or have additional details about the case, contact police at (801) 799-3000 and reference case […]
SANDY, UT・2 DAYS AGO
ABC4

Man charged after kidnapping two men, accusing them of stealing his pet raccoon

SALT LAKE CITY (ABC4) – A man was charged Thursday for holding two men against their will, accusing them of having stolen his pet raccoon, police say. On Sunday, July 31, near 25 North Redwood Road, two men were at an underpass near an RV when “a man fired a shot,” charging documents state. Upon […]
SALT LAKE CITY, UT・1 DAY AGO

SALT LAKE CITY (ABC4) – A man has been arrested after allegedly stealing an excavator from a construction site and driving it nearly a mile to a Smith’s grocery store parking lot where he started ripping up the ground. Salt Lake City Police Department (SLCPD) say that this investigation began today just after noon when […]
SALT LAKE CITY, UT・1 DAY AGO
ABC4

SALT LAKE CITY (ABC4) – At this time 1700 South Main Street to 300 West is closed off while officers work to clear up an incident that was thought to involve a hazardous or suspicious item. Detective Ruff with the Salt Lake City Police Department (SLCPD) confirmed to ABC4 that the object in question was […]
SALT LAKE CITY, UT・3 DAYS AGO

SALT LAKE CITY (ABC4) – The goal is to keep police in the ballpark neighborhood to quickly respond to crime.  “We got officer who need to charge their laptops from their vehicles, pump up a bike tire, take their lunchbreak and right now they’ve been going to the public safety building taking them out of […]
SALT LAKE CITY, UT・3 DAYS AGO
ABC4

MESQUITE, Nev. (ABC4) – Two female fugitives from Salt Lake County were arrested Thursday after police received a tip stating that the women were possibly staying in Mesquite, Nevada. Erika Rochelle Vigil, 31, of Magna was arrested along with 28-year-old Sherri Lee Vigil of Salt Lake City. Detectives followed up on the tip they initially […]
MESQUITE, NV・3 DAYS AGO
ABC4

SALT LAKE CITY (ABC4) – A suspect has been arrested in relation to a shooting that took place overnight in the epicenter of a police-targeted area.  Anthony Griffin, 42, is facing one count of Felony Discharge of a Firearm, one count of Possession of a Dangerous Weapon by a Restricted Person, and one count of […]
SALT LAKE CITY, UT・3 DAYS AGO
ABC4

WEBER COUNTY, Utah (ABC4) – A pilot made an emergency landing in a field in Western Weber County Thursday afternoon, officials say. Weber County Sheriff’s Deputies and Weber Fire District responded to the incident at 12:20 p.m. Thursday. The pilot reportedly experienced a mechanical failure, which forced him to land. Due to the remote location […]
WEBER COUNTY, UT・2 DAYS AGO