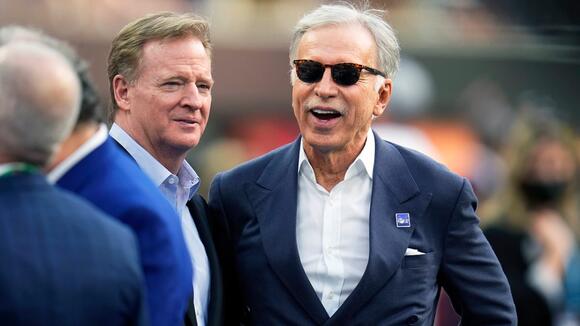 No matter how well your year's going, it likely doesn't compare to Stan Kroenke's.

The owner of the defending Super Bowl champion Los Angeles Rams will get to hoist another sought-after silver trophy, as another one of his properties emerged victories in the 2022 Stanley Cup Final that concluded with its sixth game on Sunday night.

Kroenke's Colorado Avalanche took home its third championship in franchise history, topping the two-time defending champion Tampa Bay Lightning by a 2-1 final at Amalie Arena. It's the second Stanley Cup won under Kroenke's ownership and first since his maiden voyage with the franchise in 2001, when they defeated the New Jersey Devils.

The Avalanche's Stanley Cup victory marks the third professional sports title for a Kroenke-owned franchise won over the last 135 days and the second in this month alone. In addition to the Rams' triumph in Super Bowl LVI (won on their home turf at SoFi Stadium) , Kroenke also enjoyed the spoils of a National Lacrosse League title when his Colorado Mammoth (an indoor team that shares Ball Arena with the Avalanche) upset the Buffalo Bandits in a best-of-three championship set. With their win, the Mammoth captured its first title since 2006.

The hockey and indoor lacrosse titles give Kroenke a pair in each sport to match his couple of Vince Lombardi Trophies, He was also a part of the Rams' ownership group when the franchise won its first Super Bowl in St. Louis after the 1999-2000 season.

Kroenke had to transfer his majority stake of the Avalanche and Denver Nuggets (the NBA franchise that also calls Ball Arena home) to his wife Ann upon taking full control of the Rams in 2010, as the NFL does not allow owners to hold majority control of other teams in opposing markets (Denver being home to the NFL's Broncos as well).

In addition to the recent titles, Kroenke's resume also boasts an MLS Cup title (his Colorado Rapids prevailing in 2010) as well as an esports title with the Los Angeles Guerrillas of the Call of Duty League (2021).

The Rams' coming Super Bowl defense will likely serve as his best opportunity to add to his growing collection: the Rapids (5-7-4) are currently four points out of a playoff spot in MLS' Western Conference while the Nuggets are coming off a first-round exit at the hands of the NBA champion Golden State Warriors despite the efforts of MVP Nikola Jokic.

ATLANTA − There was never a doubt that a set a post-game snap counts would be more intriguing than the ones which emerged from the Browns' 23-20 loss Sunday at Atlanta. The injuries which particularly hit the Cleveland defense made it necessary to break down who played how many snaps. Or, who didn't...
CLEVELAND, OH・9 MINUTES AGO
Charlotte Observer

Offense is running out of options. What we learned from Panthers’ loss to Cardinals

The Panthers’ offense held Carolina back in a 26-16 home loss against the Arizona Cardinals. Where do things go from here?
CHARLOTTE, NC・22 MINUTES AGO
RamDigest

The Rams travel to San Francisco for a Monday Night Football matchup with the division foe 49ers in Week 4.
SAN FRANCISCO, CA・2 DAYS AGO
HuffPost