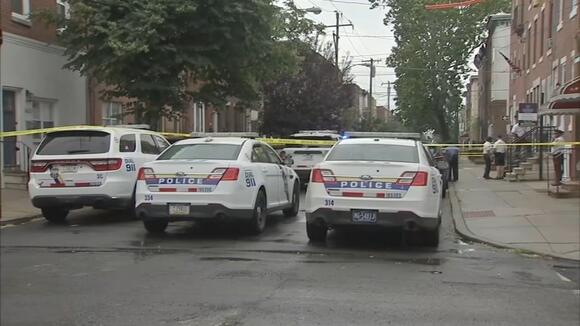 Two men are dead after a shooting at a home in South Philadelphia. Gunfire erupted around 1:35 p.m. Monday on the 1600 block of S. 10th Street. Police say two men, who were allegedly trying to break into a home, were shot by two men inside the house. A 33-year-old man suffered 15 gunshot wounds throughout his body, police say. He was taken to Thomas Jefferson University Hospital where he was pronounced dead. The other man is believed to be between 25 and 30 years old. He suffered five gunshot wounds, police say. He was also pronounced dead at Jefferson. The names of the men who were killed have not been released. "This is surprising. This neighborhood is usually very safe. It's a shock to see something like this happen. I live a block away," said John Carrozza. "It's sad. It's a sign of the times, unfortunately." "I've been here for six years. I feel really safe. I just had my catalytic converter stolen, and I'm thinking maybe it's time to move out - for something like this to happen in the middle of the afternoon..." said Mary Grace McHale. Police say no weapons have been recovered and no arrests have been made. The two men who shot the suspects are said to be cooperating with the investigation. But what's happened here has left neighbors in fear for what could come next. "There's no more fist fights. There's just pull out a gun and shoot," said Corrozza. "Things are getting worse around here. Now there's a double homicide and everyone has weapons. I tell my wife 'stay in, don't go out without me.' And now it's getting very close to home," said Nick, who lives nearby.

Now the neighbors should feel safer. Criminals will think twice about entering another home in that neighborhood.

This good news is starting to happen more and more people are fed up with the government only wanting criminals to have guns and everybody else unable to protect themselves.

That’s what happens when you enter the space of the wrong mfin one. Good for the homeowners.

A 75-year-old man was driving in his car when police say he was shot on the 900 block of Girard Avenue in North Philadelphia. He was one of the nearly dozen victims shot Friday night.
PHILADELPHIA, PA・9 HOURS AGO
6abc Action News

The investigation began back on August 6 when Washington Township officers were called to a dispute inside an apartment on Woodmont Circle.
GLOUCESTER COUNTY, NJ・12 HOURS AGO
6abc Action News

Witness told police a man had locked himself inside the FedEx truck.
PHILADELPHIA, PA・2 DAYS AGO

Action News has confirmed that at one person has died in the wreck.
DELAWARE COUNTY, PA・40 MINUTES AGO
6abc Action News

At least 20 shots were fired during a double shooting in West Philadelphia.
PHILADELPHIA, PA・4 DAYS AGO

Diniar Camp was shot and killed while attending a funeral for his friend Joelill Foy -- the founding member of the singing group Brotherly Love.
PHILADELPHIA, PA・3 DAYS AGO
6abc Action News