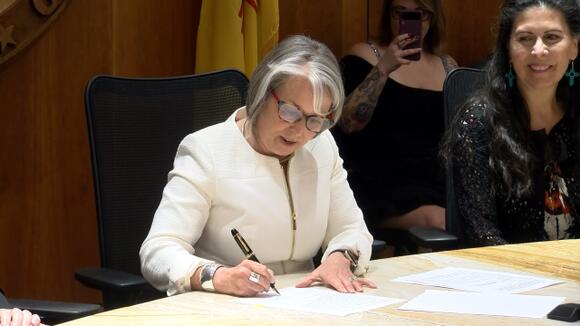 SANTA FE, N.M. (KRQE) – Amid the U.S. Supreme Court decision overturning Roe v. Wade and ending federal protections on the right to an abortion, New Mexico’s Governor signed an executive order Monday related to abortion access in the state. The order addresses issues several outstanding issues as they related to New Mexico’s willingness to help other states that now have different laws on the books related to abortion.

The order comes as New Mexico lawmakers consider more definitions surrounding abortion following the state’s 2021 law, repealing a 1969 abortion ban in New Mexico. The governor was joined at Monday’s press conference by lawmakers and reproductive rights advocates, including Senate Majority Whip Linda Lopez (D-Albuquerque), and representatives of Planned Parenthood of the Rocky Mountains and the ACLU of New Mexico.

The order can be broken down into three elements. The first surrounds assistance from New Mexico state agencies to other states. It directs all New Mexico state employees, appointees, officers or any others acting on behalf of the state to not provide assistance to any “investigation or proceeding initiated in or by another State that seeks to impose civil or criminal liability or professional sanction upon a person or entity” for various choices related to reproductive health care services that are legal in New Mexico.

The second elements seeks to define protection of health care and other professionals licensed in New Mexico. It directs New Mexico’s Superintendent of Regulation and Licensing to work with boards to develop policies ensuring “no person shall be disqualified from licensure or subject to discipline by a New Mexico board of professional licensure” for providing reproductive health care services otherwise legal in New Mexico, but illegal in another state.

The third element outlines limits on interstate extradition related to states that have outlined criminal statutes related to abortion. The order states the “Office of the Governor shall decline any request received from the executive authority of any other State to issue a warrant for the arrest or surrender of any person charged with a criminals violation of a law” as they relate to legal practices surrounding reproductive health care in New Mexico.

“It means we will not cooperate for any criminalization or attempt at removing a license, or holding accountable a provider here who might be under national license or regional license [in respects to abortion],” Governor Lujan Grisham said Monday. “I will not be executing, if there were any, warrants or extradition for any provider related to this issue.”

The order comes as several nearby states have enacted trigger laws, immediately banning or curtailing abortion procedures amid the Roe v. Wade decision. In New Mexico, abortion remains legal after lawmakers repealed a 1969 law during the 2021 legislative session.

November 8th. Vote OUT Muchhelke Lujan-Grisholm! She's only in it for herself! She cares nothing about Us Tax Payers who pay her salary! Time to go, her term is up and we don't want her! Cleaning house!!!

so sad these governors are so afraid of the voters . not one of them are trying to put this on the ballet and let voters decide. they are that afraid it won't go the way they want. sorry thos is a dictatorship if they sign executive orders, the voters should decide not the governor. JUST AMAZING NOT NOT ONE MEDIA OUTLET HAS MENTIONED PUT IT ON THE BALLET

I bet she'll be voted out. She's by no means a great governor at all. New Mexico has terrible tastes in governors that are voted in.

CARLSBAD, N.M. (KRQE) – Florida Governor Ron DeSantis was in the Land of Enchantment at a rally for New Mexico gubernatorial candidate Mark Ronchetti. The event started around 4:00 p.m. at the Walter Gerrells Performing Arts and Exhibition Center in Carlsbad. Governor DeSantis spoke on a wide variety of issues including New Mexico’s response to COVID, vaccine […]
20 HOURS AGO
KRQE News 13

NEW MEXICO (KRQE) – A new grant from the Human Resources and Services Administration will help expand access to mental health recourses in Eastern New Mexico. The $2 million grant will expand services in Curry, Roosevelt, De Baca and Quay counties. One of the biggest goals is to give students at Clovis Community College and Eastern […]
MENTAL HEALTH・5 HOURS AGO
KRQE News 13

NEW MEXICO (KRQE) – Congresswoman Yvette Herrell has introduced legislation that would prioritize the hiring of veterans. The Veteran Recruitment Act would require the United States Secretary of State to send a plan to the President. That plan would prioritize the recruitment and hiring of veterans for a number of positions within the Department of Defense, Intelligence, […]
MILITARY・2 DAYS AGO
KRQE News 13

Could shipping containers act as a complete border wall?

Providing the containers work in the small gap in Yuma, Arizona, many are wondering if this could be a solution for the rest of the southern border.
YUMA, AZ・1 HOUR AGO

Proposals now being accepted for Gold King Mine settlement-related projects

NEW MEXICO (KRQE) – The application process has opened for projects that may be funded with $10 million received as part of the Gold King Mine Settlement. The settlement funding from the U.S. Environmental Protection Agency (EPA) provided to the Office of the Natural Resources Trustee is available for projects that restore or replace injured natural resources like river, land, and watershed restoration and conservation, or projects that were impacted by the Gold King Mine release.
INDUSTRY・2 DAYS AGO
KRQE News 13

NEW MEXICO (KRQE) – Billions of dollars are coming to national laboratories around the country including Sandia National Laboratories and Las Alamos National Lab in New Mexico. U.S. Senator Ben Ray Lujan met with the directors from both labs Friday about the impact of the funding on our state. “Chips is good for our country good […]
U.S. POLITICS・2 DAYS AGO
KRQE News 13

Aden Chavez is back from Florida and attending Cibola High School

ALBUQUERQUE, N.M. (KRQE) – Stand out quarterback at Cibola High School for the past 3-years, Aden Chavez has returned to the state of New Mexico to finish out his senior year at Cibola. Chavez left the state to play football at a prep academy in Florida. KRQE Sports confirmed on Sunday, that Aden Chavez is back […]
FLORIDA STATE・7 HOURS AGO

BOISE, Idaho (AP) — Idaho’s strict abortion bans will be allowed to take effect while legal challenges over the laws play out in court, the Idaho Supreme Court ruled Friday. The ruling means potential relatives of an embryo or fetus can now sue abortion providers over procedures done...
IDAHO STATE・2 DAYS AGO
KRQE News 13

NEW MEXICO (KRQE) – More New Mexicans will soon have access to broadband internet. The Connect New Mexico Pilot Program will award $123M in grants to cover 75% of total project costs for broadband in unserved and underserved areas in the state. “Internet for all is more than just the connection, it’s about making sure that […]
INTERNET・3 DAYS AGO
KRQE News 13

NEW MEXICO (KRQE) – The state of New Mexico is trying to help communities become more eco-friendly. In order to do that the Department of Transportation is introducing a new grant for electric vehicle charging stations. The DC Fast EV charging program is a reimbursement program. Grant applicants must demonstrate they’ll be able to cover the full […]
POLITICS・2 DAYS AGO

ALBUQUERQUE, N.M. (KRQE) – The largest school district in the state is once again seeing a bus driver shortage. We’re hearing from their union president about why it’s hard to retain drivers – pay and student discipline.  Kathy Chavez says one of the biggest reasons bus drivers leave the job is because of the bad behavior […]
ALBUQUERQUE, NM・7 HOURS AGO
KRQE News 13

SANTA FE, N.M. (KRQE) – Hundreds of banners honoring New Mexico veterans will once again line Santa Fe streets. The removal of the Hometown Heroes banners caused an uproar after officials took them down citing safety concerns about whether the light poles could support them. Since then, the city has worked with the light pole manufacturer to […]
SANTA FE, NM・3 DAYS AGO
KRQE News 13

Troubling questions unresolved in latest end to Till case

By her own telling, Mississippi authorities provided Carolyn Bryant Donham with preferential treatment rather than prosecution after her encounter with Emmett Till led to the lynching of the Black teenager in the summer of 1955. Instead of arresting Donham on a warrant that accused her of kidnapping days after Till’s...
MISSISSIPPI STATE・2 DAYS AGO
KRQE News 13

Cities with the fastest-growing home prices in New Mexico

(STACKER) – Stacker compiled a list of cities with the fastest growing home prices in New Mexico using data from Zillow. Cities are ranked by the dollar change in Zillow Home Values Index for all homes from the twelve months ending June 2022. The charts in this story were created automatically using Matplotlib. Data was […]
2 DAYS AGO
KRQE News 13

The number of Texas teachers quitting is rising. In their own words, here’s why.

AUSTIN (KXAN) — As a new school year begins, Texas is reeling from a record number of teacher resignations. While leaders and districts look for solutions to combat recruitment and retention challenges, some worry classrooms may continue to be left without qualified educators. But what’s really behind the shortage?...
TEXAS STATE・3 HOURS AGO
KRQE News 13

NEW MEXICO (KRQE) – Showers and storms are moving southeast through the Gila and lower Rio Grande Valley this morning. Rain will dissipate throughout the morning commute, and the rest of the state will see plenty of sunshine to start the day. Drier air moves into the state today, keeping eastern NM completely dry. The middle […]
ENVIRONMENT・3 DAYS AGO