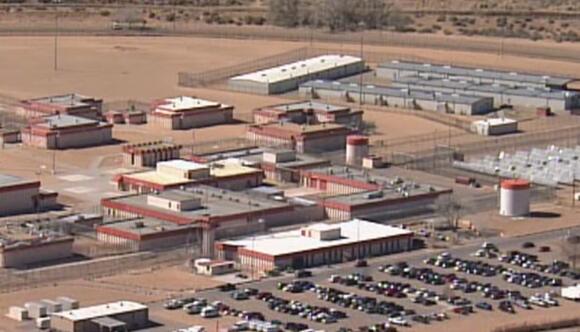 Officials say staff at the facility reported an inmate, who has not been identified, had attacked several corrections officers and a medical staff member with a sharpened toothbrush. The inmate was eventually restrained and is now facing assault charges. One corrections officer was taken to the hospital. That officer was treated for injuries and released.

no biggie. they will give him a few extra weeks. Then when he,s released into a halfway house they will set him up with welfare payments, food stamps and other government goodies

OMAHA (AP) — A Nebraska woman has been charged with helping her teenage daughter end her pregnancy at about 24 weeks after investigators uncovered Facebook messages in which the two discussed using medication to induce an abortion and plans to burn the fetus afterward. The prosecutor handling the case said it’s the first time he […]
NEBRASKA STATE・1 DAY AGO

Editor’s Note: A previous version of this story said the project would cost hundreds of billions of dollars, it has been corrected to read hundreds of millions of dollars NEW MEXICO (KRQE) – State agencies are releasing their extensive plan to protect drivers and wildlife from collisions. Driving across New Mexico, it’s not uncommon to come […]
POLITICS・18 HOURS AGO
KRQE News 13

ALBUQUERQUE, N.M. (KRQE) – New Mexicans with cannabis-related charges are seeing their cases re-evaluated. Many of those charges are likely to be expunged from the records, but some people involved raise questions about the process. Last year, New Mexico lawmakers legalized the use and sale of recreational cannabis. Lawmakers also passed an accompanying bill to automatically […]
ALBUQUERQUE, NM・2 DAYS AGO
KRQE News 13

ALBUQUERQUE, N.M. (KRQE) – The University of New Mexico Hospital celebrated the opening of its new parking garage Wednesday. The garage, which has three times the space of the old garage, will eventually service the new critical care tower currently under construction. The garage itself however is already open and in use. “Although many of our resources […]
ALBUQUERQUE, NM・20 HOURS AGO
KRQE News 13

NEW MEXICO (KRQE) – The new suicide prevention and crisis phone number, 988 has a new feature. Veterans or service members facing a crisis can dial 9-8-8 and press option 1. The feature will link callers to the U.S. Department of Veterans Affairs support system. According to Veterans Affairs, staff linked to the 988 number are trained […]
MILITARY・21 HOURS AGO
KRQE News 13

State reimburses families for missed school meals due to COVID

NEW MEXICO (KRQE) – The New Mexico Tourism Department is giving communities thousands in grant money to help bounce back from the pandemic. Several communities were awarded grant money, including Roswell, which received $10,000 to help promote next year’s UFO Festival. The funds come from the Tourism Events Growth and Sustainability Program, which was launched this […]
2 DAYS AGO
KRQE News 13

NEW MEXICO (KRQE) – The 2022 Kids Count data report was released Monday. The report is a 50-state report that analyzes how children and families are faring and ranks New Mexico last in overall child well-being, despite showing improvement. The report outlines four different categories: Economic well-being, Family and community, health and education. According to the […]
EDUCATION・2 DAYS AGO

New Mexico’s acequia ‘customs and traditions are being tested’

NEW MEXICO (KRQE) – Talk to any New Mexico farmer near the Rio Grande and they’ll tell you how important their acequia is. While they may look like nothing more than dirt ditches, every acequia in New Mexico is tied to a rich history and agricultural tradition — one that’s now being threatened. Water is essential […]
AGRICULTURE・1 DAY AGO
KRQE News 13

Counties with the highest COVID-19 vaccination rate in New Mexico

(STACKER) The vaccine deployment in December 2020 signaled a turning point in the COVID-19 pandemic. By the end of May 2021, 40% of the U.S. population was fully vaccinated. But as vaccination rates lagged over the summer, new surges of COVID-19 came, including Delta in the summer of 2021, and now the Omicron variant, which comprises the majority of cases in the U.S.
PUBLIC HEALTH・2 DAYS AGO
KRQE News 13

NEW MEXICO (KRQE) – A new nationwide estimate shows that there may be around 11 million “food insecure” youth across the U.S., and nearly 100,000 of them are in New Mexico. These numbers come from Map the Meal Gap, a report by the non-profit Feeding America. Their goal, for over 40 years, has been to fight […]
BUSINESS・1 DAY AGO
KRQE News 13

Counties with the highest unemployment rate in New Mexico

(STACKER) Unemployment rates, while significantly lower than the alarming pandemic peak of 14.7% experienced in April 2020, remain a subject of concern, notably as economic experts bandy around the idea of a potential recession by 2023. The last economic recession—the Great Recession of 2008-2010—sent rates up to 10% as of October 2009. It was not until the spring of 2019 that unemployment finally went down to the same level it sits at now.
2 DAYS AGO
KRQE News 13

NEW MEXICO (KRQE) – After three years of being absent from Expo New Mexico due to the pandemic, The School Arts Showcase will be making its return back to the New Mexico State Fair in 2022. The last time the showcase was featured in person was in 2019. The last two years have been virtual. According […]
VISUAL ART・18 HOURS AGO
KRQE News 13

Abortion to remain legal in Wyoming while lawsuit proceeds

CHEYENNE, Wyo. (AP) — Abortion will remain legal in Wyoming while a lawsuit that contests a ban on the procedure in nearly all cases moves ahead, a judge ruled Wednesday. The lawsuit will likely succeed because the ban appears to violate the state constitution and is vague, Teton County District Judge Melissa Owens, in Jackson, wrote in granting the preliminary injunction.
WYOMING STATE・19 HOURS AGO
KRQE News 13

NEW MEXICO (KRQE) – Researchers at New Mexico State University predict that the dusky grouse will lose almost all of its habitat by the end of the 21st century due to climate change. The dusky grouse is recognized as “climate threatened” as climate change continues to devastate forests and fuel more extreme wildfires. Wildfires like the Hermits […]
WILDLIFE・2 DAYS AGO
KRQE News 13

ALBUQUERQUE, N.M. (KRQE) – The ABQ Biopark and Biopark Society is helping conserve another butterfly species found only in New Mexico’s Sacramento Mountains. The population of Checkerspot Butterflies has been declining since formal surveys began in 1999 because of habitat loss and degradation. Right now, it’s one of the most endangered butterflies in the United States. […]
ALBUQUERQUE, NM・19 HOURS AGO