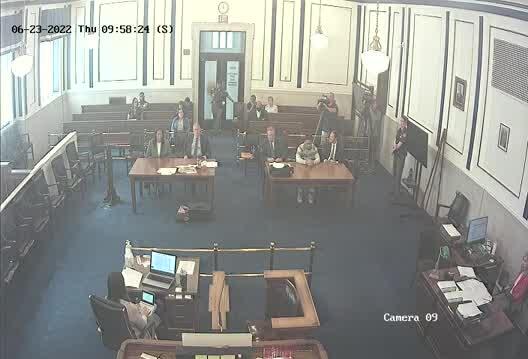 A man accused of killing his girlfriend and her three-year-old son was attacked by the boy’s father during a court hearing in Cincinnati, Ohio, on Thursday, June 23.

Officials said Desean Brown was in court in connection to the death of Nyteisha Lattimore and her son Nylo when the boy’s father, Tonio Hughes, “charged the defense table and punched Mr Brown in the right side of the head.”

Brown’s attorneys were asking the judge during the session to throw out his confession, according to local news reports .

The judge found Hughes to be in contempt of court, according to an official statement, and sentenced him to seven days in the Hamilton County Justice Center.

The Hamilton County Sheriff’s Office released this surveillance footage from inside the courthouse.

The content in this entry is provided (by an NGO/activist/public body) for public dissemination and rebroadcast. It may be used freely with credit. Credit: Hamilton County Sheriff’s Office via Storyful

Come on true justice was about to be served and they stopped him..never would’ve attempted to stop him I would’ve just stood there and watched him do his thing.

Should have left him do it a few more mins. But your self in this man’s shoes!