‘Can’t believe the s*** she went through’: Viewers stunned by Kelly Holmes documentary Being Me 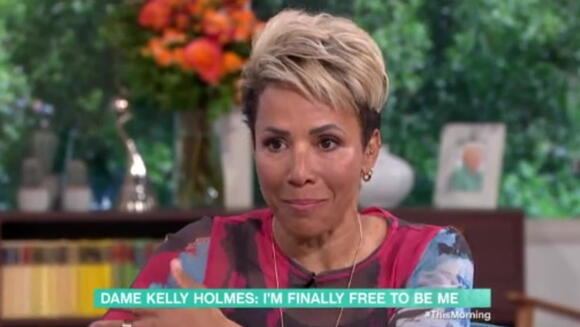 Fans are feeling emotional after watching Kelly Holmes ’s powerful coming out documentary, Being Me , on ITV last night (26 June).

In the one-off documentary, the double Olympic champion opened up about her coming out journey.

Holmes came as gay just a week ago, and this film followed her as she prepared to break the news, and explored the many reasons why she felt unable to do so for more than three decades.

It covered her fear of coming out when she was in the army as a teenager, and the impact that hiding her sexuality has had on her mental health.

“Really proud that @goalhangerfilms have made the Dame Kelly Holmes documentary,” tweeted Gary Lineker ahead of the show airing. “Having seen it, I think you’ll love it. It’s incredibly emotive and extraordinary in many ways. You may need a hankie.”

After watching the documentary, one viewer wrote: “Watching the Kelly Holmes documentary, can’t believe the s*** she went through. She’s a national treasure. It shouldn’t be that hard to come out as gay. She’s a hero.”

A third said: “Kelly you are a star! As a man who came out in his fifties your words will mean so much to so many #kellyholmes – now live your life be free x.”

Holmes, who has now retired from sports, specialised in the 800 metres and 1,500 metres events and won gold medals for both distances at the 2004 Summer Olympics in Athens.

Kelly Holmes: Being Me is available now on the ITV Hub.

NeNe Leakes set the record straight — no pun intended — after her son Brentt seemingly came out as gay. “Brentt is not gay,” the “Real Housewives of Atlanta” alum said during a “Breakfast Club” interview Monday. “Not to my knowledge.” Leakes, 55, shared that she spoke with the 23-year-old on the phone after receiving calls from friends who were “concerned” about his TikTok video on Saturday. “He called me up and was like, ‘Mom, everybody is asking if I’m gay because I did this TikTok thing,'” she explained. “And I said, ‘It’s OK if you are gay. It’s fine with me.’ “And he...
1 DAY AGO
Distractify

“King of Pop” Michael Jackson’s family has been all over the news lately. The late pop star’s ex-wife Lisa Marie Presley passed away on Jan. 12. His daughter, Paris Jackson, attended the Los Angeles premiere of the documentary Pamela, a love story on Monday, Jan. 30. And that same day, Michael’s son Prince Jackson congratulated cousin Jaafar Jackson on his role as the “Thriller” singer in the upcoming biopic Michael. But what about Michael’s other son? Where is Blanket Jackson now?
LOS ANGELES, CA・20 HOURS AGO
HollywoodLife

Leah Remini wasn’t at Jennifer Lopez‘s wedding to Ben Affleck last summer, which was shocking since Leah, 52, and J.Lo, 53, have been close friends for a very long time. But a recent wedding that Leah did make it to was J.Lo’s ex-husband, Marc Anthony, 54, and Nadia Ferreira‘s lavish nuptials in Miami on January 28. Leah, who has known Marc for a long, long time as well, showed off her glamorous look for the “I Need To Know” hitmaker’s special day on Instagram.
MIAMI, FL・1 DAY AGO
Showbiz Cheat Sheet

That '70s Show lives on with That '90s Show, which picks up almost 20 years after the original show ended. Unfortunately, in that time span, a beloved character died off-screen. As noted from a couple of lines of dialog from Kitty Forman (Debra Jo Rupp), her mom, Bea Sigurdson, died between the shows' two time periods. Bea was played by the late TV icon Betty White, who died on Dec. 31, 2021, in four memorable episodes of the original show.
2 DAYS AGO
Elvis Duran and the Morning Show

Wheel Of Fortune is no stranger to controversies that enrage fans. Recently, a player lost because she took too long of a pause, while another lost for adding an "a," and a different player lost for accidentally adding the word "and," and she wasn't the only one it happened to. Even Celebrity Wheel Of Fortune has seen issues, like when a contestant didn't pronounce a sound correctly. Meanwhile, the show has also been slammed for confusing puzzles, but even with all the debatable moments, no one appearing on the show has ever said anything about it... until now.
2 DAYS AGO
The Independent

Vanilla Ice has come forward with his reasoning for ending his brief relationship with Madonna.The “Ice Ice Baby” rapper – real name Rob Van Winkle – dated the pop singer for eight months in the 1990s.In 2021, Vanilla Ice claimed that Madonna “actually proposed” to him when they were together, but that he decided to say no as he was “too young”.While Madonna has yet to speak publicly on whether she proposed to the rapper, the music star doubled down on the claim in a new podcast interview, during which he also shared his alleged reason for ending the...
2 HOURS AGO
The Independent

Jeremy Vine has detailed the alleged moment Jeremy Clarkson recited a racist nursery rhyme on Top Gear.In a new Channel 5 documentary, the broadcaster explains how Clarkson’s on-screen character “specialises in giving offence” before recounting the row from 2014.“He did the nursery rhyme ‘Eeny, meeny, miny, moe’ and the really old rendering of that contains the N-word. He sort of mumbled to obscure the word but in one of the takes, he thinks the word wasn’t obscured and he thinks this take then emerged later,” Vine said.Click here to sign up for our newsletters.
2 DAYS AGO
The Independent

Julia Fox has revealed why keeping her New York City apartment has helped her son become more in touch with the “real world” despite her life in the spotlight.In a recent video on her TikTok, Fox responded to a troll who claimed that she was worth “30 million dollars”. The remark was a comment on the New York City apartment tour video she recently conducted on the platform in an effort to give “maximum transparency” to her fans about her not-so luxurious space.After noting in her clip that she didn’t “expect [her] apartment tour to go so viral,” she...
NEW YORK CITY, NY・20 HOURS AGO
The Independent

A bride on Married At First Sight’s season 10 premiere was shocked after a guest at the ceremony revealed a secret about her new husband.Bronte Schofield, 29, tied the knot with Harrison Boon, 32 in Australia on Monday night’s episode (30 January).Minutes after the couple were married, guest Jessica Tomlinson told Schofield why she recognised the groom, revealing that he had dated her friend days before the ceremony.“No, no, you’re f*****g lying,” Schofield said.Click here to sign up for our newsletters. Read More Australia: Indigenous protesters rally for abolition of 'Invasion Day'Australia: Indigenous protesters rally for abolition of 'Invasion Day'Tourist shares moment he’s airlifted to hospital after snake bite in Australia
1 DAY AGO
The Independent

The iconic Comic Relief red nose has been transformed by legendary designer Sir Jony Ive for this year’s Red Nose Day.Sir Jony, the man who has designed some of Apple’s biggest products, has created a red nose that is 95 per cent plant-based and comes as flat circle that pops out to become spherical.Celebrities including Sir Lenny Henry and Greg James can be seen sporting the new look ahead of Red Nose Day, which returns on Friday 17 March.Click here to sign up for our newsletters.
1 HOUR AGO
The Independent

Ed Sheeran has returned to social media after what he called “turbulent things” in his personal life.In an Instagram video, the singer-songwriter apologised to fans for his online absence, saying that “things are looking up”.In November 2022, Sheeran told followers that he’d be taking a break from social media until 2023.“I haven’t been that engaged in my fanbase or my social media online over the last couple of years... I just didn’t really feel like being online and pretending to be something I’m not,” Sheeran explained.Sign up for our newsletters. Read More Children's commissioner urges tech firms to 'step up' to remove indecent images on social mediaEd Sheeran raps emotional tribute to SBTV founder Jamal Edwards at Stamford BridgeEd Sheeran stayed with Jamal Edwards’ mother for a week after SBTV founder’s death
57 MINUTES AGO
The Independent

Ozzy Osbourne has said that following extensive spinal surgery he is not “physically capable” of doing his tour dates in Europe and the UK.The 74-year-old former Black Sabbath singer had a fall at home in 2019 which aggravated injuries from a near-fatal quad bike crash in 2003.Since that time, Osbourne has performed during the closing ceremony at the Birmingham 2022 Commonwealth Games and an NFL game in the US in September.He told his fans on Instagram on Wednesday: “This is probably one of the hardest things I’ve ever had to share with my loyal fans.Diary of a Madman Tour Program...
HAWAII STATE・2 HOURS AGO