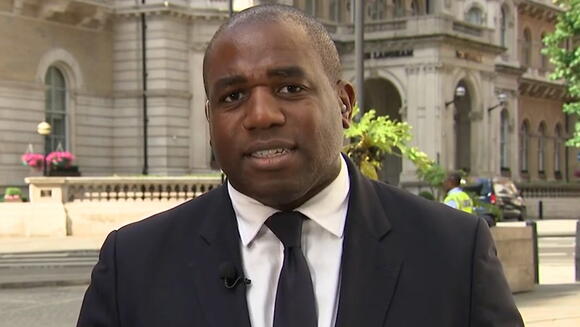 David Lammy has suggested the result of last week’s by-election in Wakefield suggests Labour are on course to win the next General Election with a “comfortable majority”.

The shadow foreign secretary made his comments after Thursday’s “excellent” win and suggested more people will be persuaded to vote against the Conservatives in future.

“On that result in Wakefield - and indeed in Tiverton - we would be forming the next government with a comfortable majority, that is what that result tells us,” Mr Lammy said on Sky News.

An MP has had the Labour party whip suspended after she called Kwasi Kwarteng ‘superficially’ black.Rupa Huq was heard discussing the chancellor’s private school background, before adding that "you wouldn’t know he is black" when hearing him speak. The MP for Ealing Central and Acton, in west London, is thought to have made the comments at a fringe event at the Labour conference in Liverpool on Monday. A senior Labour spokesperson said: “We condemn the remarks she made, which were totally inappropriate and call on her to withdraw them.”In the audio, revealed by the Guido Fawkes website, Ms...
SOCIETY・3 HOURS AGO
The Independent

Liz Truss does not have what it takes to best represent British interests when dealing with senior international leaders, according to more than half the people who have taken part in a newly published poll.More than 52 per cent say they have little or no confidence that the prime minister will perform well on the world stage, with the same number holding that this comes after the country’s reputation was already seriously tarnished during the Boris Johnson years.Pessimism about what lies ahead was also echoed by a majority (52 per cent) who believe that Brexit has damaged Britain, ...
POLITICS・2 HOURS AGO
The Independent

A former Tory MSP has described UK Government tax plans as “profoundly unconservative” as he said the UK “needs a Labour government”.Professor Adam Tomkins, who left Holyrood last year after one term to return to work at Glasgow University, wrote in a column for the Herald newspaper that the Tories’ time in power “is up”.Prof Tomkins described the conference speech of Shadow Chancellor Rachel Reeves as “more prudent” than Kwasi Kwarteng, adding, when that is the case “you know the Tories are in the deepest trouble”.“What we are witnessing right now is not only the Conservative Party trashing its own...
ECONOMY・1 HOUR AGO
The Independent

Andy Burnham has described Sir Keir Starmer’s address to the Labour Party conference as a “powerful speech from a prime minister-in-waiting.”The mayor of Greater Manchester said it was “the right speech at the right moment in time,” with Sir Keir “taking the space that the Tories vacated on Friday.”“I think it makes a Labour government very very likely,” Mr Burnham told TalkTV, remarking the leader was “speaking to ordinary people” and not just the elite.Click here to sign up for our newsletters.
POLITICS・2 HOURS AGO

Britain’s youngest female murderer who stabbed a stranger to death and was only caught after bragging about it is seeking to be released from prison after 25 years.Sharon Carr was just 12 years old when she knifed 18-year-old Katie Rackliff more than 30 times in an unprovoked attack in June 1992.The killer, dubbed the Devil’s Daughter, had picked the teenage hairdresser out at random as she walked home from a nightclub in Surrey.The murder went unsolved for two years until Carr attacked a girl with a knife at school in Camberley, Surrey, in June 1994, and tried to strangle two...
PUBLIC SAFETY・1 DAY AGO
The Independent

The Duke of Norfolk, who planned Queen Elizabeth II’s funeral, has been banned from driving for six months for using his phone while behind the wheel.On Monday, the Earl Marshal – who is responsible for organising the State Opening of Parliament – pleaded guilty to the offence at Lavender Hill magistrates’ court.The ban was imposed despite his claim that he needs his licence to arrange King Charles III’s upcoming coronation.Edward Fitzalan-Howard, 65, admitted to driving through a red light while on the phone to his wife after he was stopped in a BMW car in south London on 7 April...
U.K.・1 DAY AGO
The Independent

Austerity cuts ahead could mean ‘end of NHS’, warns ex-Bank of England deputy

The scale of the austerity cuts looming if the Liz Truss government does not reverse course on the economy could result in the end of the NHS, the Bank of England’s former deputy governor has warned.Sir Charlie Bean said it would be better to “get a Tardis and go back” to undo Kwasi Kwarteng’s mini-Budget – warning that the government was losing the confidence of markets.“I find it implausible that the measures that are presently being contemplated to boost growth … will be anything like powerful enough to obviate the need for some significant spending cuts,” he told Sky...
BUSINESS・1 HOUR AGO
The Independent

Liz Truss appears to be taking a “scorched earth” approach to the economy which will leave a Labour government to pick up the pieces after the election expected in 2024, a shadow cabinet minister has said.As stock markets sank and the pound plunged in the wake of last week’s “kamikaze” mini-Budget, delegates at Labour’s annual conference in Liverpool could scarcely believe their luck at the apparent willingness of the prime minister and chancellor Kwasi Kwarteng to take a hatchet to their own party’s biggest electoral assets.And there was a growing sense of confidence among them that opinion polls giving...
POLITICS・1 HOUR AGO

Labour leader Sir Keir Starmer said the International Monetary Fund (IMF) rebuke to UK economic policy was “very, very serious” and urged Liz Truss’s government to urgently change course.The Labour leader said the extraordinary intervention showed “just what a mess the government have made of the economy” saying the market turmoil was “self-inflicted wound” caused by chancellor Kwasi Kwarteng’s mini-Budget.He told LBC that Mr Truss and Mr Kwarteng should urgently set out “how they’re going to fix the problems they’ve made” after the mini-Budget “shambles”.Sir Keir said his own variable-rate mortgage had seen payments go up by “a few hundred pounds”...
ECONOMY・2 HOURS AGO
The Guardian

Delays to criminal trials affected by the ongoing barristers’ strike may not be a good enough reason to keep defendants in custody on remand if the dispute continues beyond the end of November, High Court judges have said.The Director of Public Prosecutions (DPP) Max Hill KC brought a challenge against decisions made in two separate cases in Bristol and Manchester, where judges refused to extend the custody time limits of three defendants whose trials were delayed due to the unavailability of barristers.In a ruling on Wednesday, Dame Victoria Sharp and Mr Justice Chamberlain ruled that the judges in those cases...
LAW・1 HOUR AGO
The Independent

Sir Keir Starmer has revealed that his own mortgage repayments have gone up by a “few hundred pounds.”“Like millions of other people, we’re on a variable mortgage, and therefore like lots of other people our outgoings have gone up pretty significantly,” Sir Keir told LBC.The Labour leader elaborated that while he is “not pleading a special case” for himself, the increase “hugely matters” for many people.He also spoke of the financial struggles of his sister, a care worker, who he said is “in a high state of anxiety” over her bill payments.Sign up for our newsletters. Read More Keir Starmer says Tory government's economic plan is 'immoral'Labour Party conference: Andy Burnham says Starmer is 'prime minister-in-waiting'‘What she said was racist’: Keir Starmer condemns Rupa Huq’s Kwasi Kwarteng comment
REAL ESTATE・1 HOUR AGO

The peer who organised the Queen’s funeral will argue he should not be banned from driving because he needs his licence to arrange the King’s coronation, a court has heard. The Earl Marshal, the Duke of Norfolk, 65, pleaded guilty at Lavender Hill Magistrates’ Court on Monday to...
U.K.・2 DAYS AGO
The Independent

Eurovision 2023: ‘No favouritism’ between Glasgow and Liverpool – Graham Norton

Veteran Eurovision commentator Graham Norton has said he can “show no favouritism” as Glasgow battles Liverpool to host next year’s contest.The two cities are going head to head in the contest to stage the competition, after being selected from a list of seven possibles.Norton, while he stressed he could “show no favouritism” over where the international singing show is held, added that Glasgow would be a “great place to have it”.The UK is hosting next year’s Eurovision Song Contest after coming second in this year’s event to Ukraine, however, the Russian invasion means the event cannot be staged there.And then there...
WORLD・2 HOURS AGO
The Independent

John Swinney: I am very concerned by IMF statement on UK tax plans

Scotland’s Deputy First Minister has said he is “very concerned” following an extraordinary statement from the International Monetary Fund on the UK Government’s tax plans.Chancellor Kwasi Kwarteng last week announced in a so-called mini-budget plans to scrap the top rate of tax and cut the basic rate to 19p in the pound.The announcement sent the the pound spiralling, with it eventually falling to an all-time low against the dollar.The IMF issued a statement on Tuesday night saying it was “closely monitoring” the situation in the UK and urged the Chancellor to “re-evaluate the tax measures”.Speaking to the BBC on Wednesday,...
WORLD・2 HOURS AGO
The Independent

The Church of England’s lead bishop on the environment has said the Government’s mini-budget displays a “recklessness with nature”, describing it as “a travesty”.The Rt Rev Graham Usher, the Bishop of Norwich, shared a lengthy Twitter thread in which the Royal Society for the Protection of Birds (RSPB) criticised the Government’s proposed 38 investment zones.These are areas in England where planning rules will be loosened to release more land for commercial and housing developments.🚨😡 As of last week, the UK Government has launched an attack on nature. We are angry and we are mobilising against these proposed plans. Please read...
RELIGION・2 HOURS AGO
The Independent

The Bank of England has announced that it will intervene in an attempt to calm markets after they were spooked by last week’s mini-Budget by the Liz Truss government.The central bank emergency programme to buy up government bonds in a bid to stave off a “material risk to UK financial stability”.It comes a day after chancellor Kwasi Kwarteng vowed to push on with the government’s radical borrowing-fuelled £45-billion tax cut spree, despite growing calls to change course. But only hours later the IMF issued an extraordinary rebuke of his and Ms Truss’s tax plans, urging a...
ECONOMY・45 MINUTES AGO
The Independent

British police are “working closely” to ensure that weapons from the Ukrainian war do not reach the UK and find their way into the hands of terrorists.Metropolitan Police deputy assistant commissioner Matt Twist said the conflict was one of several “international challenges” affecting security in the UK.Speaking at the International Security Expo in London on Tuesday, he added: “Whatever the outcome of this awful conflict, it is clear that over the medium term there will be huge amounts of weapons and ammunition in the region, which will take some time to stabilise and normalise when the phase of outright war...
PUBLIC SAFETY・1 HOUR AGO
The Independent

The new Metropolitan Police commissioner has vowed to be “ruthless” in rooting out racists and misogynists from the force’s ranks. Sir Mark Rowley refused to say whether he thought Britain’s largest force was institutionally racist, but admitted it has a “real problem with race”.Speaking to journalists at New Scotland Yard on Tuesday, he said he was “not interested in using labels that have been kicked around by different people to mean different things”.“Racism is a systemic issue that we have been too weak in tackling, it’s got too much of a hold in corners of the organisation,” Sir Mark added.“I’m...
SOCIETY・1 HOUR AGO