Gloria Steinem slams Roe v. Wade repeal, says 'there is no democracy' without the right to chose 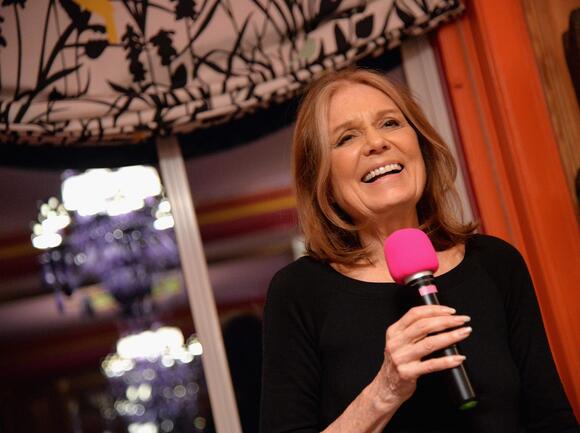 Journalist and feminist leader Gloria Steinem has slammed the impact of repealing Roe v. Wade will have on democracy, in an email to AP.

"Obviously, without the right of women and men to make decisions about our own bodies, there is no democracy," she said.

She has called for action to fight the Supreme Court ruling overturning Roe v. Wade, protecting US abortion rights.

"Banning abortions does not stop the need. It just bans their safety."

Steinem said the ruling "guarantees civil disobedience and disrespect for the court."

Steinem was at the forefront of the civil rights movement for women's equality in the '60s and 70s.

AP writes that Steinem was inspired to move from journalism to feminist activism after she attended a "speak-out"  women's meeting where she could discuss her own illegal abortion in London when she was 22 for the first time.

At the end of 2021, Steinem told NPR that "controlling reproduction has always been the first step in any hierarchical or authoritarian government."

The repealing of Roe v. Wade has sparked anger and protests worldwide, with global leaders condemning the Supreme Court and hoards of crowds marching through the streets.

Many celebrities have also denounced the ruling.

For example, Lizzo is fundraising for Planned Parenthood and Abortion Rights, and Harry Styles has said he is "absolutely devastated" for Americans.

One father spent the night of the Supreme Court ruling sleeping atop a DC bridge to protest it.

Guido Reichstadter told Insider, "Tens of millions of women are waking up without the right to control their bodies, and that's why I'm on top of this bridge. I can't understand why the streets aren't already full of fathers standing up for their children's lives."

Georgia Republican says Herschel Walker became the GOP's Senate pick because he was a 'famous football player' backed by Trump: 'We didn't ask who was the best leader'

Trump is hesitant to keeping campaigning for Herschel Walker in case the scandals around him get worse, report says

Trump is hesitant to campaign for scandal-hit candidate Herschel Walker, CNN reported. Per The Daily Beast, Walker paid for a woman to have an abortion despite wanting abortions banned. Walker's own son has criticized his campaign and alleged that he abused his mom. Former President Donald Trump is reluctant to...
GEORGIA STATE・1 DAY AGO
Business Insider

Trump denied allegations that he showed ex-employees salacious photos of women he'd been involved with, telling Maggie Haberman it's 'not my style'

Donald Trump would intimidate White House staffers, The Washington Post reported. This meant they didn't challenge him over how he handled classified information, the report said. Trump's is suspected by the DOJ of wrongly taking classified info after leaving office. Former President Donald Trump's aides struggled to challenge his handling...
POTUS・2 DAYS AGO
Business Insider

Donald Trump has raised tens of millions of dollars for his post-presidential political committees. Some of Trump's text and email solicitations are demonstrably bogus. A latest text message come-on tells supporters they have a "membership payment" scheduled — and that's not true. Even by his own low standards, Donald...
POTUS・2 DAYS AGO
Business Insider

Trump expressed amazement that Stephen Miller and other top aides were Jewish: 'Who would have thought my top guys are Jews': book

Trump expressed amazement that some of his top aides were Jewish, according to a new book. "Who would have thought my top guys are Jews," Trump told Jared Kushner, Stephen Miller, and Jason Miller. Jason Miller is not Jewish, New York Times reporter Maggie Haberman pointed out in her new...
POTUS・3 DAYS AGO
Business Insider

Trump and national GOP leaders are backing Herschel Walker after abortion allegations, even as his son says he's a 'liar'

Herschel Walker paid for a woman's abortion despite his pro-life stance, the Daily Beast reported. Walker denied it, but his TikTok influencer son Christian is calling him a liar in a series of tweets and videos. Meanwhile, national Republican and anti-abortion groups say they're standing by Walker. Republican Senate candidate...
GEORGIA STATE・3 DAYS AGO
Business Insider

Herschel Walker continued to deny that he paid for a woman to have an abortion in 2009. But he said on Thursday that "there's nothing to be ashamed of" if he had done so. That's despite his support for banning abortion nationwide without any exceptions. Georgia Republican Senate candidate Herschel...
FOOTBALL・1 DAY AGO
Business Insider

A rift has opened in Trump's legal team, with a lawyer frozen out for wanting to cooperate with the DOJ: NYT

The lawyer, Chris Kise, was said by The New York Times to have recommended a gentler approach than Trump ultimately favored in the Mar-a-Lago case.
POTUS・7 HOURS AGO
Business Insider

MAGA world will excuse Walker's abortion scandal rather than vote for a democrat: GOP operative. Conservatives are already saying paying for one abortion is preferable to funding all abortions. "Walker can't say anything about abortion now," a pundit said of the neutralizing effect. Republicans would rather rationalize away Herschel Walker's...
GEORGIA STATE・2 DAYS AGO

John Fetterman slams Dr. Oz over report on dogs that died in experiments supervised by the TV personality: 'I could use your help to keep the #PuppyKiller out of the US Senate'

Fetterman's comments came after Jezebel reported on Oz's involvement in experiments that led to the deaths of 329 dogs.
PENNSYLVANIA STATE・2 DAYS AGO
Business Insider

Kanye West slams lawmakers, including his 'friend' Trump: 'For politicians, all Black people are worth is an approval rating'

Kanye West called out lawmakers for using Black voters during an interview with Tucker Carlson. West recalled Trump's delight at getting a boost in popularity after the rapper's White House visit. West said politicians, including Trump, saw Black people only as tools to raise approval ratings. Rapper Kanye West has...
PRESIDENTIAL ELECTION・14 HOURS AGO
Business Insider

Trump constantly talks about Ron DeSantis to his aides as the Florida governor is poised to be his most formidable opponent in the 2024 election, NYT's Maggie Haberman tells CNN

Trump said he almost didn't want to refute Cassidy Hutchinson's testimony that he lunged at a Secret Service agent on Jan. 6 because it made him look tough

MIAMI, Florida — Former President Donald Trump said Wednesday that he almost didn't want to refute a secondhand account that he tried to lunge at a Secret Service agent on January 6, because it made him look "physically tough." Trump was referring to former White House aide Cassidy Hutchinson's...
MIAMI, FL・1 DAY AGO
The Guardian

‘We have not seen any reason to adjust our own nuclear posture,’ says press secretary
POTUS・13 MINUTES AGO
Business Insider

Herschel Walker fires his campaign's political director for allegedly leaking to the press during the Trump-backed candidate's messiest week to date: report

Elon Musk says Trump's 'Truth Social' app is 'essentially a right-wing echo chamber': 'You might as well call it Trumpet'

The billionaire said he bought Twitter in order to avoid the site becoming a "trusted and transparent" counterpart to Trump's Truth Social.
POTUS・5 HOURS AGO