England vs New Zealand LIVE: Cricket score and updates from third Test as England motor in chase of 296 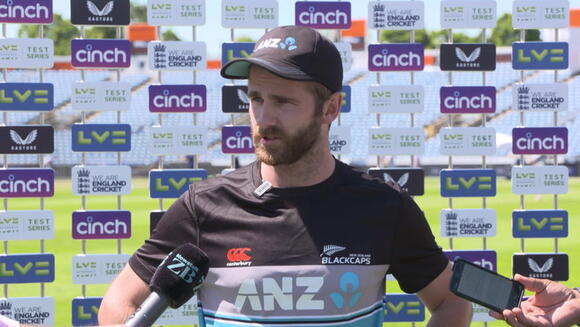 Jack Leach completed a career-best 10-wicket match at Headingley to set England on course for another fearless run chase and a series whitewash over New Zealand .

The left-arm spinner followed up his first-innings haul of 5-100 with even better figures of 5-66 as New Zealand set their hosts a target of 296 on day four of the third and final Test.

Ordinarily that would look like a huge ask but, having chased down 277 at Lord’s and 299 at Trent Bridge, England went about their business with a flourish to reach 183-2 at stumps.

Ollie Pope stroked a fluent 81 not out as he continued to grow into his new role at No 3 and Joe Root was at his unflappable best with an unbeaten 55. A sense of inevitability settled over proceedings as they piled on 132 together, leaving an apparent victory lap on day five.

Yorkshire have thrown their doors open to spectators for free, replicating Nottinghamshire’s successful initiative last week, and will hope to fill the stands for a triumphant conclusion to a gripping month-long contest.

Follow all the latest coverage of today’s match with our live blog below:

Plymouth Argyle are set to unveil a statue of pioneering Black footballer Jack Leslie.Leslie, born in Canning Town, spent 14 seasons at the Devon club, scoring 137 times in 401 appearances. The inside left was called up to the England squad in 1925, but was subsquently withdrawn, allegedly after selectors learned of the colour of his skin.“I believe that the manager sent in his request, saying: ‘I’ve got a brilliant player here, he should play for England,’” his granddaughter, Lesley Hiscott, told the BBC in 2020.“So then someone came down to watch him. They weren’t watching his football. They were...
SPORTS・49 MINUTES AGO
The Independent

Warrington half-back George Williams will captain England in their World Cup warm-up match against Fiji on Friday, team management have confirmed.The former Wigan and Canberra Raiders playmaker will cover for first-choice skipper Sam Tomkins, who is being rested by coach Shaun Wane.The clash at Salford’s AJ Bell Stadium is England’s final outing before they face Samoa in their tournament opener at St James’ Park in Newcastle on October 15.Williams, 27, said: “It’s an unreal feeling. I think it will be the pinnacle of my career to captain my country. It is massive for me, my family and everyone who has...
RUGBY・45 MINUTES AGO
The Independent

DNA from skeletons ‘challenges perceptions and understanding of ancient England’

Ancient DNA extracted from skeletons in burial sites across England shows evidence of mass migration from Europe and movement of people from as far as West Africa, challenging perceptions that English ancestors lived in small elite groups, archaeologists have said.Research recently published by the team revealed the first people to call themselves English were largely descended from northern Europeans, mainly Germany, Denmark and the Netherlands.But further investigation by scientists at the University of Central Lancashire also shows an individual having a genetic link to West Africa, pointing to a “diverse and complex” culture in England during the early Middle Ages.The...
SCIENCE・1 DAY AGO
The Independent

England World Cup 2022 squad: Who’s on the plane, who’s in contention and who has work to do?

England’s competitive preparations are over with little time before Gareth Southgate selects his squad for this winter’s World Cup in Qatar.Southgate’s 28-man selection for the September internationals contained few surprises and the manager again largely stuck with his trusted core for the defeat against Italy in Milan and draw with Germany at Wembley, the last two matches before the tournament in November.The Three Lions will be aiming to go one better than they did at Euro 2022 last summer and win their first major international tournament in 56 years in Qatar. Southgate’s side will play Iran, the United States...
WORLD・46 MINUTES AGO

More than 3,000 killed by high temperatures recorded this summer

More than 3,000 heat-related deaths were recorded in England and Wales this summer as temperature-records were smashed across the UK. The joint report between the UK Health Security Agency and the Office of National Statistics found that during five so-called “heat-periods” between June and August this year, 3,271 excess deaths were recorded. The largest number of excess deaths - 2,227 - were recorded during the hot weather between 10 and 25 July. The UK recorded 40.3C in Coningsby in Lincolnshire on 19 July, the highest temperature since records began. Temperature records in Wales and Scotland were also broken, reaching 37.1C...
ENVIRONMENT・14 MINUTES AGO
The Independent

Thomas Frank has acknowledged it would take a “miracle” for Brentford to keep pace with Saudi-backed Newcastle United but is determined to upset the top-six hopefuls this weekend.The Bees make the lengthy trip to St James’ Park with the hosts only a point ahead after eight Premier League games this season.Brentford also finished their first top flight campaign in 74 years only two positions below Newcastle in 13th, but the gulf in spending power between the teams is clear with Saudi Arabia’s Public Investment Fund holding an 80 per cent stake in the Magpies after they completed a £305million takeover...
PREMIER LEAGUE・1 HOUR AGO
The Independent

Wales fly-half Dan Biggar is to leave Northampton at the end of the season.The 32-year-old joined Saints from the Ospreys in 2018 and has helped them achieve two top-four finishes in the Gallagher Premiership.Director of rugby Phil Dowson revealed financial constraints played a major part in the decision, saying: “It has been well documented that, for this season and next, the salary cap for Premiership clubs is lower than it was previously.“There is also a reduction in marquee players from two to one, which presents an additional challenge in building a balanced and competitive squad. We have to start putting...
RUGBY・1 HOUR AGO

West Ham boss David Moyes believes his side are showing signs of getting back to their best after a 1-0 Europa Conference League win at Anderlecht.The Hammers saw Gianluca Scamacca climb off the bench to score the winner in the 79th minute and put them in firm control of Group B.The £35million signing did the damage nine minutes after coming on, but the Hammers could have had it wrapped up long before then in Belgium.Moyes’ side have looked a shadow of the team who almost finished in the Premier League’s top six last season so far this term, but, building...
PREMIER LEAGUE・2 HOURS AGO
The Independent

Max Verstappen has another opportunity to claim his second world title this weekend as Formula 1 returns to Suzuka for the first time since 2019 for the Japanese Grand Prix.The Red Bull star – 104 points clear of Charles Leclerc in the standings – will be crowned champion in Japan if he wins and sets the fastest lap on Sunday.Verstappen is looking to bounce back after a disappointing weekend in Singapore, finishing seventh, while his team-mate Sergio Perez claimed victory. Leclerc came home second, with Carlos Sainz in third.Lewis Hamilton also endured a difficult Sunday in the rain of...
MOTORSPORTS・21 MINUTES AGO