Vanderbilt professor among those killed in West Virginia helicopter crash 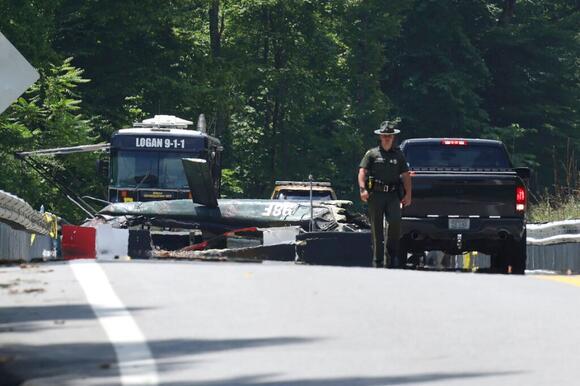 CHARLESTON, W.Va. (AP) — Medical examiners in West Virginia have released the names of six people killed in the crash of a Vietnam-era helicopter that gave tour rides.

The aircraft crashed Wednesday, June 22, during its last planned flight at a reunion for helicopter enthusiasts in Logan County. All six people aboard were killed. The state’s chief medical examiner released the names of the victims on Saturday.

I am writing to share the tragic news that one of our faculty, Kevin Warren, Research Associate Professor of Electrical Engineering, passed away on Wednesday, June 22.

Through his work in the Vanderbilt University Institute for Space and Defense Electronics, Kevin performed extensive research into the development and application of novel radiation effects related error rate prediction methods for microelectronics in terrestrial, atmospheric, and space environments.

This a devastating loss for the Vanderbilt community and all those who knew Kevin.

Anyone having difficulty processing this sad news can reach out to the r esources below.

© The Associated Press. All Rights Reserved.
This material may not be published, broadcast, rewritten or redistributed without permission.

Personal finance site WalletHub weighed all 50 states and the District of Columbia to find the best – and worst – states to give birth and raise a young child.
MASSACHUSETTS STATE・15 HOURS AGO
WKRN News 2

The spotted lanternfly may be a stunning sight for some, but for others, it's a cause for concern.
PENNSYLVANIA STATE・17 HOURS AGO
WKRN News 2

He calls it fate: after a man from California stepped up as the physics teacher at Green Hill High School in Wilson County.
WILSON COUNTY, TN・2 DAYS AGO

The family of country singer Naomi Judd filed a court petition Friday to seal police reports and recordings made during the investigation into her death.
WILLIAMSON COUNTY, TN・1 DAY AGO
WKRN News 2

Through the Abortion Access Nashville organization, people like Tatum work to find ways to fund a trip and connect women with clinics across state lines.
NASHVILLE, TN・2 DAYS AGO
WKRN News 2

A Texas man was arrested after officials said he attempted to use a drone to deliver drugs and other contraband into a prison.
FORT WORTH, TX・5 HOURS AGO

Almost a month after the National Suicide Prevention Lifeline's 11-digit-number became 988, mental health counselors say they are seeing a change in the reasons people are reaching out to them.
NASHVILLE, TN・1 DAY AGO
WKRN News 2

Stacker investigated how much land is owned by the federal government in Tennessee using data from the Congressional Research Service.
TENNESSEE STATE・1 DAY AGO
WKRN News 2

School districts in Middle Tennessee started another school year with COVID-19 cases still present in communities, though they're nowhere close to the peaks of the pandemic.
NASHVILLE, TN・2 DAYS AGO
WKRN News 2

The city of Mt. Juliet is currently experiencing internet and phone outages, which are reportedly affecting all city offices.
MOUNT JULIET, TN・1 DAY AGO

Did you feel it? Magnitude 2.7 earthquake shakes Tennessee Valley Saturday

Although the Tennessee Supreme Court struck down the amendment in the 1970s, our constitution technically says religious officials aren’t allowed to take office in either house of the legislature. However, this could change in November.
NASHVILLE, TN・10 HOURS AGO
WKRN News 2

A few cats and kittens have already been adopted from Kentucky, but True Rescue currently has over 330 animals under their care.
MOUNT JULIET, TN・3 DAYS AGO
WKRN News 2

With every degree that the Earth gets warmer, the likelihood for a “megastorm” increases, too, the study found.
CALIFORNIA STATE・14 HOURS AGO

The Tennessee Board of Education called a special meeting Thursday to discuss the Tennessee Investment in Student Achievement Act (TISA), the new education model the state will use starting in 2023.
TENNESSEE STATE・2 DAYS AGO
WKRN News 2

Tennessee Republican Senators are blaming Democrats for higher food prices while Democrats in Washington say a fix is on the way.
TENNESSEE STATE・2 DAYS AGO
WKRN News 2

Senators Marsha Blackburn and Bill Hagerty voted against an amendment that would put a cap on the price of insulin.
TENNESSEE STATE・3 DAYS AGO