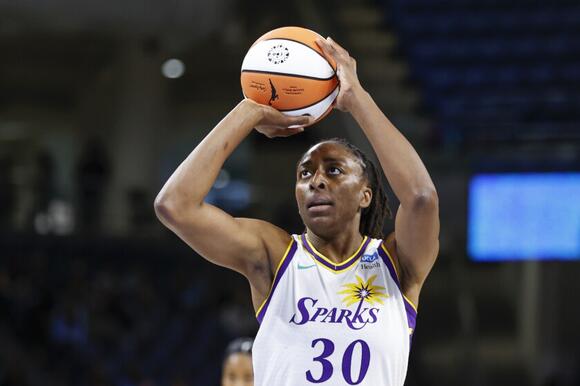 Nneka Ogwumike scored 24 points to lead four players in double figures and the Sparks clamped down in the fourth quarter to beat the Seattle Storm 85-77 on Saturday night.

Stewart hit her first three three-point attempts as the Storm jumped out to a 19-7 lead early.

Toliver scored the final four points in a 29-point second quarter and the Sparks led 49-43 at halftime.

Bally Sports will broadcast 63 Clippers games this season in a new multiyear deal, the length of which was not announced.
LOS ANGELES, CA・19 HOURS AGO
Los Angeles Times

After struggling against Oregon State, USC quarterback Caleb Williams put on a show in a win over Arizona State, but questions remain about the Trojans' defense.
LOS ANGELES, CA・6 HOURS AGO
Los Angeles Times

'Who is this kid?' How L.A.'s Jalon Daniels went from unknown quarterback to Heisman candidate

Gardena Serra High's Rodrick Pleasant is the fastest football player in the state and he put it to good use in narrow win over Sherman Oaks Notre Dame.
NFL・19 HOURS AGO
Los Angeles Times

Caleb Williams recovered from a rough performance against Oregon State during a win over Arizona State, but can he handle Utah and Washington State?
LOS ANGELES, CA・2 HOURS AGO

Plaschke: After UCLA upset No. 15 Washington, it's time to stop ignoring the Bruins