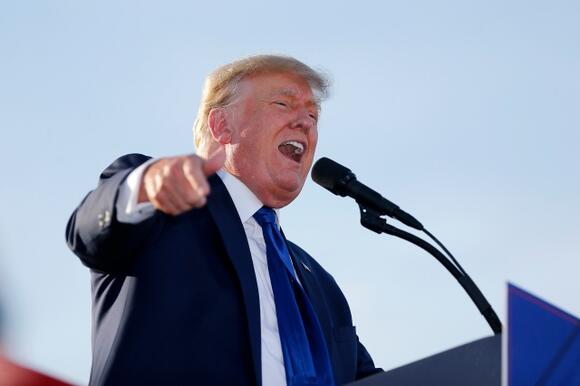 The event just outside of Quincy was to stump for Congresswoman Mary Miller. She is in a close primary with Congressman Rodney Davis due to new redistricting lines.

Trump also endorsed Darren Bailey for governor, who is the current front runner in the GOP race. He would take on Governor JB Pritzker in November if he wins.

The former president also addressed the Supreme Court overturning abortion rights and guns, and said that everything the January 6 committee is showing is lies. He called out Congressman Adam Kinzinger for being a Republican on the committee.

really. Did you get money from Trump. Probably not. I don't know what is the matter with you people who want Trump back. Didn't he steal enough money from our government!

The ramblings of an old man. If he was sitting in a bar or a park bench doing the same, they’d ignore him. Maybe call for the men in a straight jacket.

Trump brags and hates on others for an hour. Big Surprise. He couldn’t pronounce any big words., or state any relevant facts. Hope they got their money up front. He doesn’t pay his bills.

A San Angelo business owner has been charged with a hate crime following her arrest for an assault that was caught in a viral video in April.
SAN ANGELO, TX・2 DAYS AGO
MyStateline.com WTVO WQRF

Editor’s note: NewsNation has clarified Griggs’ age. She was 49, not 53. (NewsNation) — Soap opera actress Robyn Griggs has died, her publicist Lisa Rodrigo confirmed to USA TODAY on Sunday. She was 49. Star of the popular daytime soap “Another World,” Griggs did not hide her...
CELEBRITIES・1 DAY AGO
MyStateline.com WTVO WQRF

These are the names people change the most, Social Security says

What are the most-changed names in the U.S.?
SOCIAL SECURITY・2 DAYS AGO
Newsweek

A new ranked-choice voting system in Alaska is predicted to help the incumbent Republican senator in Tuesday's primary.
ALASKA STATE・1 DAY AGO

Donald Trump has warned that “terrible things are going to happen” as he faces the blame for violence and threats directed at FBI agents. “The country is in a very dangerous position. There is tremendous anger, like I’ve never seen before, over all of the scams, and this new one, years of scams and witch hunts, and now this,” Mr Trump told Fox News Digital. The former president told the outlet that he “will do whatever” he can “to help the country,” adding that “temperature has to be brought down”. Trump supporters and his GOP allies reacted with outrage...
POTUS・1 DAY AGO
The Independent

When John McCain chose Sarah Palin as his running mate in the 2008 presidential election, she was seen by his own team as something of a wildcard; a Hail Mary for a campaign that was losing steam.The former Alaska governor and self-described Hockey Mom was a rarity at the top tier of national politics: she was notoriously averse to facts and policy detail, she fully embraced culture war issues, and smeared her political opponents with innuendo and falsehoods.But today, as she makes a return to the national stage by way of a congressional race in Alaska, she is welcomed back...
ALASKA STATE・42 MINUTES AGO
The Guardian

Republican voters rejected Cheney’s bid to continue serving as their congresswoman but she said she is considering a run for presidency in 2024
U.S. POLITICS・1 MINUTE AGO
OK! Magazine

'PLEASE DAD, DON’T DO IT!': Ivanka Trump’s Emotional Plea To Donald To Retire, Begs Him To Not Run For 2024

Ivanka Trump tried to convince dad Donald not to run for an unprecedented second term when she reunited with him — after spending months apart — at mom Ivana’s funeral. “Ivanka pulled Donald aside at a family gathering and had a heart-to-heart with him,” an insider exclusively tells OK!.
PRESIDENTIAL ELECTION・5 DAYS AGO

More than a dozen FBI whistleblowers have come forward to Republican investigators in Congress, according to Rep. Jim Jordan (R-OH). The congressman, who is the ranking member of the House Judiciary Committee, told Fox News host Trey Gowdy the number has risen to 14 after the FBI raid at Trump's Mar-a-Lago resort.
CONGRESS & COURTS・2 DAYS AGO
The Associated Press

JUNEAU, Alaska (AP) — Alaska Republican U.S. Sen. Lisa Murkowski advanced from her primary along with Kelly Tshibaka, her GOP rival endorsed by former President Donald Trump, while another Trump-backed candidate, Republican Sarah Palin, was among the candidates bound for the November general election in the race for Alaska’s only House seat. Murkowski had expressed confidence that she would advance and earlier in the day told reporters that “what matters is winning in November.” Tshibaka called the results “the first step in breaking the Murkowski monarchy’s grip on Alaska.” Tshibaka also said she was thankful “for the strong and unwavering support President Trump has shown Alaska.” A Murkowski has held the Senate seat since 1981. Before Lisa Murkowski, who has been in the Senate since late 2002, it was her father, Frank Murkowski. Under a voter-approved elections process being used for the first time in Alaska elections this year, party primaries have been scrapped and ranked choice voting is being used in general elections. The top four vote-getters in a primary race, regardless of party affiliation, are to advance to the general election.
ALASKA STATE・5 HOURS AGO
The Independent

Rep Marjorie Taylor Greene encouraged supporters to get out to the polls during the November midterms and went one step further during a video address to advocate that they exercise their right to vote “one, two, three times”.In the video clip, shared online by the left-wing Twitter account PatriotTakes, an account with more than 450,000 followers, the Georgia Republican is seen standing alongside Mallory Staples, who ran to represent Georgia’s 6th Congressional District in the spring but lost in the Republican primary to Rich McCormick.The two Georgian Conservatives begin the video address by encouraging voters in the southern...
GEORGIA STATE・1 DAY AGO
MyStateline.com WTVO WQRF

The latest FBI forensic report shows that the .45 colt caliber used in the fatal shooting on the “Rust” movie set could not have been fired without pulling the trigger.
PUBLIC SAFETY・1 DAY AGO

"Obviously they're going to do that," Carlson continued. "Who knows how, maybe they'll produce surveillance video from Mar-a-Lago, apparently they've already subpoenaed that."
POTUS・22 HOURS AGO
MyStateline.com WTVO WQRF

(The Hill) – Former President Trump on Sunday called on the FBI to return documents reportedly seized at Mar-a-Lago that are protected by attorney-client and executive privileges. “Oh great!” Trump wrote on Truth Social. “It has just been learned that the FBI, in its now famous raid of Mar-a-Lago, took boxes of privileged ‘attorney-client’ material, […]
POTUS・2 DAYS AGO
MyStateline.com WTVO WQRF

Janesville woman shot while calling 911 to report a fight

JANESVILLE, Wis. (WTVO) — A woman was shot while she was on the phone with police dispatch early Sunday morning. According to Janesville Police, the 911 call center received a call at 3:09 a.m. from a woman in the 2300 block of Rockport Road. Police said the woman was reporting a disturbance between a man […]
JANESVILLE, WI・2 DAYS AGO
MyStateline.com WTVO WQRF

“We have never in history seen a former president take ultra-classified documents, stick them in his basement, loosely watched by government standards, and with the shadow of we still don't know what his motive was,” Beschloss said on NBC’s “Meet the Press.”
POTUS・2 DAYS AGO

One person was killed and another 17 people injured when a vehicle struck a crowd gathered for a fundraiser at a Pennsylvania bar.
BERWICK, PA・2 DAYS AGO
MyStateline.com WTVO WQRF

The FBI executed a search warrant at Mar-a-Lago one week ago in connection with its investigation into whether Trump violated the Espionage Act and other federal statutes. Agents allegedly seized 11 sets of classified documents from the estate, although Trump has claimed he declassified the material.
POTUS・1 DAY AGO
MyStateline.com WTVO WQRF

KILLEEN, Texas (WTVO) — A 17-year-old suspect has been arrested in the murder of a 52-year-old Texas woman who was shot and killed while visiting her son’s grave. According to the Killeen Police Department, officers were called to the Calvary Baptist Church Garden of Memories, in the 13000 block of State Highway 195 at 5:03 […]
KILLEEN, TX・2 DAYS AGO
MyStateline.com WTVO WQRF

ROCKFORD, Ill. (WTVO) — Rockford Police are looking for a teenager that they said shot a man after an argument. A 21-year-old man with a gunshot wound walked into a local hospital around 1:55 p.m. Sunday, according to the Rockford Police Department. Officers were told that the victim was walking in the 200 block of […]
ROCKFORD, IL・22 HOURS AGO