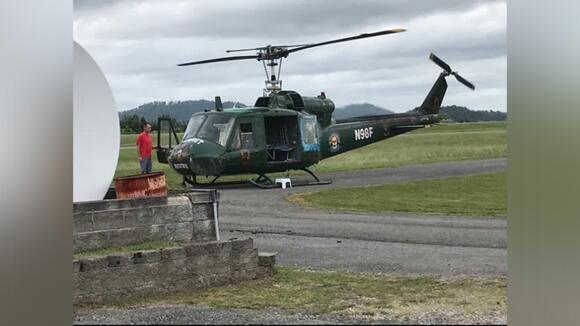 LOGAN COUNTY, WV (WOWK) — The six victims of a tragic helicopter crash in Logan County have been identified.

According to the West Virginia State Police, the office of the Chief Medical Examiner in Charleston identified the victims as John Nagle II, 53 of Austin, Texas, Donald Sandhoff, 69 of Durham, North Carolina, Kevin Warren, 51 of Franklin, Tennessee, Carolyn O’Connor, 73 of Winter Garden, Florida, Marvin Bledsoe, 64 of Chapmanville and Jack Collins, 65 of Chapmanville.

A team of National Transportation Safety Board aviation safety investigators is in Logan county to investigate the deadly crash. They say they’re looking for anyone who witnessed the accident or who has information that could help their investigation. Anyone who thinks they can help should email them at witness@ntsb.gov or call 202-314-6100.

The Huey crashed at approximately 4:57 p.m. Wednesday, June 22, killing all six people on board.

According to the NTSB, while the victims have not been identified, those on board consisted of a pilot, three passengers and two pilot-rated passengers.

The NTSB confirmed the flight was associated with the annual Huey Reunion event, which offers helicopter rides from organizer MARPAT Aviation. Investigators say the flight that crashed was the last flight planned for that day and had a different route from the tour paths that had been flown previously on Wednesday.

Investigators say much of the wreckage was consumed by a fire that broke out after the crash.

According to the NTSB, the helicopter will be recovered from the site on Friday and taken to a secure location in Atlanta to be further examined. They say they expect the work on the scene will be complete within five to seven days.

According to investigators, the helicopter crashed on rural Route 17, also known as Blair Mountain Highway, about 3.7 miles northeast of the Logan County airport where it took off. Lynn Spencer, NTSB Air Safety Investigator, said in a brief press conference that the helicopter had been in the air for about 15 minutes before it crashed.

The Red Cross and NTSB family assistance specialists will be at the Logan County Airport to assist friends and families of the accident victims.

‘You failed at your job, you should be fired’: Woman speaks out following report on I-95 mishandling

“I don't think we will ever do that drive again in the winter just because of what had happened," Travis said.
VIRGINIA STATE・1 DAY AGO
WRIC - ABC 8News

Why are flags at half-staff today in Virginia?

Gov. Glenn Youngkin made the official order to lower the United States flags and the state of Virginia flags to half-staff.
VIRGINIA STATE・19 HOURS AGO
WRIC - ABC 8News

New leads in case of Massachusetts teen missing for weeks

New information was provided Thursday in the case of a girl missing since late July from Alford. The Massachusetts State Police said they have reason to believe Navaeh Mack, 16, could be in Philadelphia.
1 DAY AGO
WRIC - ABC 8News

A new inspection report found the Commonwealth did not implement lessons learned during the Interstate 95 snow incident that occurred in January 2022.
VIRGINIA STATE・1 DAY AGO

Virginia senators Mark Warner and Tim Kaine announced that $11,549,192 in federal funding will be going toward transit systems in the Commonwealth.
VIRGINIA STATE・19 HOURS AGO
WRIC - ABC 8News

A suspect is in custody after reportedly attempting to steal from multiple homes and vehicles in Henrico, according to police.
HENRICO COUNTY, VA・1 DAY AGO
WRIC - ABC 8News

Deadlines to contend for top recognition for culinary and creative arts competitions for youth and adults close in the coming weeks.
VIRGINIA STATE・1 DAY AGO

A federal grand jury in the New Jersey returned an indictment today charging four New Jersey men with narcotics distribution and money laundering offenses, according to a release from the U.S. Department of Justice.
PUBLIC SAFETY・2 DAYS AGO
WRIC - ABC 8News

Some parents playing catch up on Virginia school vaccine requirements

Some parents are playing catch up on required vaccines as students head back to school. ImmunizeVA Senior Program Manager Rebecca Epstein said now is the time to make sure your kids are up-to-date to defend against preventable disease outbreaks.
VIRGINIA STATE・2 DAYS AGO
WRIC - ABC 8News

More than 2,000 without power in Chesterfield Wednesday

Leaders of two statewide programs offering online instruction said more kids are learning virtually than before the pandemic and, unlike many in-person schools, staff shortages haven’t been a problem.
VIRGINIA STATE・3 DAYS AGO
WRIC - ABC 8News

This week, the Virginia Craft Brewers Guild announced its intention to develop its own company for limited self-distribution.
VIRGINIA STATE・16 HOURS AGO
WRIC - ABC 8News

Fine and dandy weather is expected all weekend long for us. We might see a shower later Sunday night
RICHMOND, VA・5 HOURS AGO
WRIC - ABC 8News

Some Virginians could see lower prescription drug costs under a bill that just cleared its final hurdle in Congress.
VIRGINIA STATE・1 DAY AGO