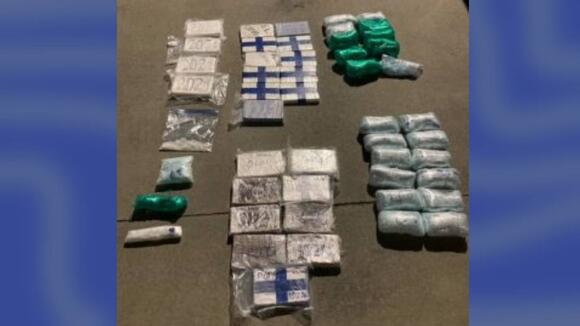 Alfonso Gomez-Santana, 60, of Fullerton, was arrested and charged with one felony count of sale or transport of a controlled substance and two felony counts of possession of sale with intent to sell, according to a news release from the Orange County District Attorney’s Office. He faces a maximum sentence of 80 months in the Orange County Jail if convicted on all counts.

California Highway Patrol officers found four kilos of fentanyl in Gomez-Santana’s vehicle during a traffic stop in Fullerton, KTLA-TV reported. A search of the man’s home led to the discovery of 20 more kilos of fentanyl, $250,000 in fentanyl pills and 122 grams of methamphetamine, according to the television station.

The district attorney’s office said it takes about 2 milligrams of fentanyl to comprise a lethal dose, KABC-TV reported.

“It is unconscionable that someone who has the ability to kill 12 million people is facing just a handful of years in jail,” Orange County District Attorney Todd Spitzer said in a statement. “Fentanyl is a national epidemic that killed more than 100,000 Americans last year and it’s not going to stop unless we have the tools as prosecutors to hold these drug dealers and drug manufacturers accountable for peddling death.”

Gomez-Santana pleaded not guilty to the charges during an arraignment on Friday, according to The Orange County Register.

Spitzer has suggested tougher penalties for people involved in creating and selling fentanyl, according to the newspaper. Last year, Spitzer and Mike Hestrin, the district attorney in Riverside County, announced new policies targeting dealers who sell fentanyl-laced drugs, the Register reported. The prosecutors called for dealers to face second-degree murder charges if they are involved in a drug sale that results in a death.

In May, the Orange County District Attorney’s Office designated a prosecutor to have powers to pursue fentanyl cases federally to maximize sentences for drug dealers, KABC reported.

“Every parent in America should be petrified that one day they are going to walk into their child’s bedroom and find them dead because their child thought they were experimenting with recreational drugs and instead drug dealers sold them a deadly dose of fentanyl,” Spitzer said in his statement. “This is not fear-mongering; this is reality -- and if we don’t start strengthening penalties for drug dealers it’s going to be the reality for you or someone you love.”

They should give him way more time than that.... ridiculousness as usual, the worst of the bad guys barely get punished. I don't get it.

Wow seriously! I really do not understand their thinking on punishment on drug dealers!! They have done nothing but complain that it's a dangerous drug, need to be punished yeah right not in this state anyway!!! It's a democratic state and Newsom knows how to sugar coat anything and everything to make him look good as a governor!!

I suspect there is an agreement made at certain levels so that drugs can keep pouring in and money can be made on both s8des. Apparently the demand for the poison is out there, cut the demand, dry up the supply. I think this man should be in prison for many, many years if not life but then I don't use drugs and have no use for any part of those even remotely involved with the dark side! Obviously people in high places covet what these reprobate have to sell for whatever reason. To me it is pure evil any way you look at it!

IRVINE, Calif. — A 23-month-old girl in California died Tuesday after she was struck by an Amazon delivery van at an apartment complex, authorities said. In a news release, the Irvine Police Department said that the truck collided with the child in the parking lot of the apartment complex in Irvine at about 3:30 p.m. PDT.
IRVINE, CA・1 DAY AGO
Boston 25 News WFXT

‘No evidence of clothes, just drugs’: Suitcases of narcotics carried through airports in CA, FL

CONCORD, N.H. (AP) — A commercial truck driver from Ukraine who was taken into custody by immigration officials shortly after he was acquitted of causing the deaths of seven motorcyclists will ask for relief from possible removal from the United States, his attorney said at a hearing Thursday. Volodymyr...
WEST SPRINGFIELD, MA・1 DAY AGO
Boston 25 News WFXT

ALBANY, N.Y. — (AP) — A New York state trooper should have been disciplined for getting romantically involved with one of Andrew Cuomo’s adult daughters while serving on the Democrat's security detail when he was governor, the state inspector general said in a report. The watchdog report...
RELATIONSHIPS・3 HOURS AGO
Boston 25 News WFXT

A Pennsylvania man has been charged with abuse of a corpse, receiving stolen property and other charges after police say he allegedly tried to buy stolen human remains from an Arkansas woman for possible resale on Facebook. A spokeswoman for the University of Arkansas for Medical Sciences in Little Rock...
ENOLA, PA・1 DAY AGO
Boston 25 News WFXT

EAST PENNSBORO TOWNSHIP, Pa. — Police say they have arrested a man in Pennsylvania for allegedly buying human remains on Facebook. In a news release from the East Pennsboro Township Police Department, Jeremy Pauley was arrested on Thursday and charged with abuse of a human corpse, receiving stolen property and dealing in proceeds of unlawful activities.
ENOLA, PA・1 DAY AGO

AUBURN, Ala. — (AP) — Police who arrested a man with an arsenal of weapons in his car are trying to determine a motive for three seemingly random shootings along Interstate 85 in Alabama and Georgia, including one that critically wounded another motorist. Jerel Raphael Brown, 39, of...
AUBURN, AL・23 HOURS AGO
Boston 25 News WFXT

OMAHA, Neb. — (AP) — Federal health officials confirmed Friday that a Nebraska child died from a rare infection caused by a brain-eating amoeba after swimming in a river near Omaha. The Centers for Disease Control and Prevention confirmed the presence of the naegleria fowleri amoeba in the...
OMAHA, NE・8 HOURS AGO
Boston 25 News WFXT

LOS ANGELES — A massive steel safe was hauled up the side of a canyon in Hollywood Hills, but the safe’s contents and how it wound up at the bottom of the canyon, are a mystery. The Los Angeles Fire Department used heavy rescue equipment to pull two...
LOS ANGELES, CA・2 DAYS AGO
Boston 25 News WFXT

LOS ANGELES — (AP) — Actor Anne Heche died from inhalation injury and burns after her fiery car crash and the death was ruled an accident, according to coroner's results released Wednesday. Heche, 53, also had a fractured sternum caused by "blunt trauma," according to information on the...
LOS ANGELES COUNTY, CA・2 DAYS AGO

Lawyers for two men charged with conspiring to kidnap Michigan Gov. Gretchen Whitmer called investigators to the witness stand Friday to try to raise questions about their tactics in 2020 and highlight scornful attitudes. The defense rested its case on the ninth day of trial. Closing arguments were scheduled for...
MICHIGAN STATE・8 HOURS AGO
Boston 25 News WFXT

SALT LAKE CITY — (AP) — Transgender girls in Utah will be given the opportunity to participate in female sports as the school year begins after a judge on Friday reversed a ban pending legal challenges from parents. Instead of an outright ban, transgender girls will now go...
UTAH STATE・6 HOURS AGO
Boston 25 News WFXT

MANCHESTER, N.H. — New Hampshire Police are actively searching for a “very dangerous” man in connection with a violent assault that occurred Thursday morning in Manchester. Manchester police said 26-year-old Drew Fortier is wanted for first-degree assault after a violent incident that happened overnight in the city’s...
MANCHESTER, NH・1 DAY AGO
Boston 25 News WFXT

OMAHA, Neb. — (AP) — A child likely died from a rare infection caused by a brain-eating amoeba after swimming in an eastern Nebraska river, health officials said, making it the second such probable death in the Midwest this summer and raising the question of whether climate change is playing a role.
OMAHA, NE・1 DAY AGO

LANSING, Mich. — (AP) — A Michigan judge on Friday blocked county prosecutors from enforcing the state’s 1931 ban on abortion for the foreseeable future, after two days of witness testimony from abortion experts, providers and the state’s chief medical officer. The ruling follows a state...
MICHIGAN STATE・8 HOURS AGO
Boston 25 News WFXT

BOWLEYS QUARTERS, Md. — A former power station was brought down with a massive implosion Friday morning that offered quite the spectacle. WJZ’s helicopter captured video of the charges as they went off at the former C.P. Crane Power Generating Station in Bowleys Quarters. The implosion went off...
BOWLEYS QUARTERS, MD・8 HOURS AGO
Boston 25 News WFXT

LOS ANGELES — (AP) — Vanessa Bryant testified Friday that she was only beginning to grieve the loss of her husband, basketball star Kobe Bryant, and their 13-year-old daughter Gianna when she was faced with the fresh horror of learning that sheriff's deputies and firefighters had shot and shared photos of their bodies at the site of the helicopter crash that killed them.
LOS ANGELES, CA・3 HOURS AGO