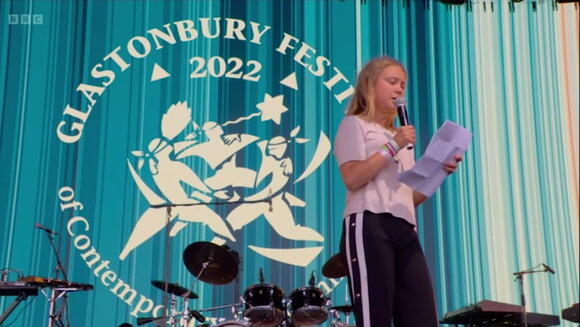 Greta Thunberg has called out “lying” political leaders on stage at Glastonbury, saying that dishonesty in public office has not “only become socially acceptable” but something the public expects.

She told revellers at the festival that they face a battle against “the forces of greed” if they want to prevent a “total natural catastrophe” caused by climate change.

The Swedish environmental activist appeared on the main Pyramid Stage on Saturday afternoon, to deliver a short speech about the climate crisis .

She said that the climate crisis is “not the new normal” and will only get worse. However she insisted that “we can still avoid the worse consequences” of climate change.

“Together we can do the seemingly impossible,” she said. 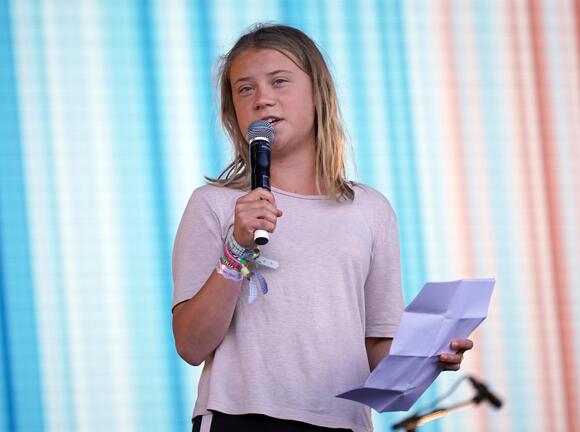 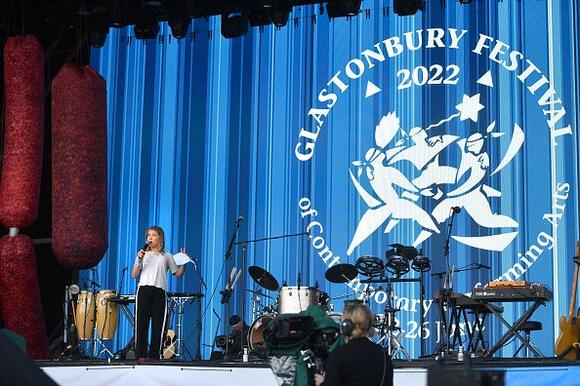 Posting on Twitter this morning, Thunberg put out a teaser for her address, saying: “I’m excited to announce that today I will be on the Pyramid Stage at Glastonbury 5.15pm. See you there!”

Follow our live updates from this year’s Glastonbury festival here

Addressing the vibrant crowd of Glastonbury attendees, she said: “We are in the beginning of a climate and ecological emergency. This is not the new normal, this crisis will continue to get worse... until we prioritise people and planet over profits and greed.”

The activist said that “we have been lied to, we have been deprived of our rights as democratic citizens and been left unaware” of the true scale of the climate crisis.

She added that “we need immediate drastic emissions reductions” and “we need to make fundamental changes to our societies”. 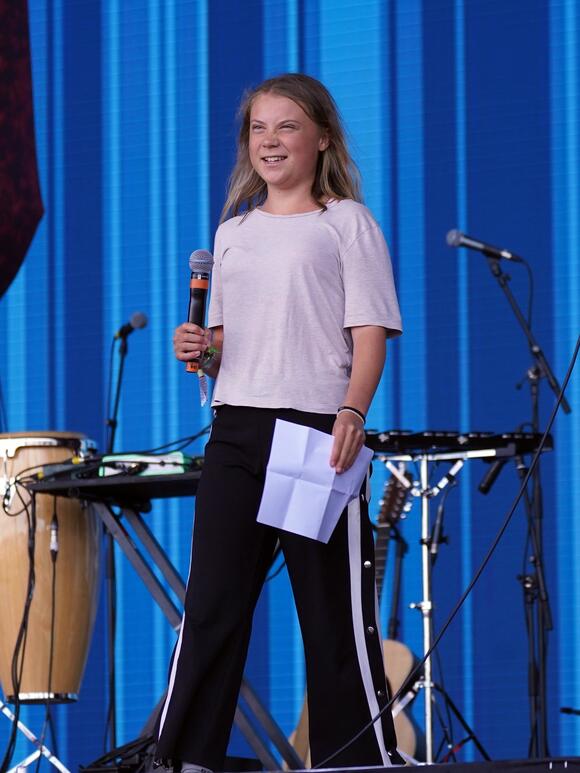 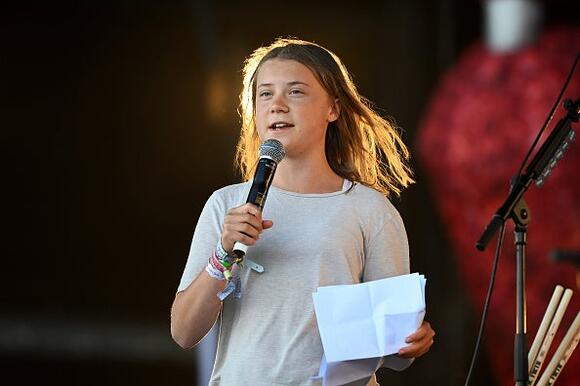 Ms Thunberg continued: “The forces of greed and profit and planetary destruction are so powerful that our fight for the natural world is limited to a desperate struggle to avoid a total natural catastrophe.

“We should be fighting for people and for nature, but instead we are fighting against those who are set on destroying it. Today our political leaders are allowed to say one thing then do the exact opposite.”

She accused world leaders of “actively creating loopholes” which benefited destructive industries. She said that they could “claim to be climate leaders while at the same time expand their nation’s fossil fuel infrastructure”.

“They can say we are in a climate emergency as they open up new coal mines, new oil fields, and new pipe lines. It has not only become socially acceptable for our leaders to lie, it is more or less what we expect them to do,” she said.

Her bold speech comes ahead of the publication of her latest project, The Climate Book, which is set to hit the shelves on 27 October this year.

Billed as a “holistic overview of the true state of the planet and an essential tool for everyone who wants to help save it”, the book sees more than 100 scientists, communicators and activists weigh in on the climate, ecological and sustainability crises.

The 19-year-old has followed in the footsteps of British broadcasting giant and naturalist David Attenborough, who made a surprise appearance on the Pyramid Stage in 2019 .

His slot introduced a four-minute extended trailer for the BBC series Seven Worlds, One Planet, which drew huge cheers from festival-goers.

Thunberg also joins the likes of former Labour leader Jeremy Corbyn, who in 2017 addressed a crowd before a set by US rap duo Run the Jewels .

save our country from liberal loons
06-26

A young women with some mental deficiencies is the spokesperson that the “climate change” people are using. Maybe next year she can talk about rocket science at the democratic convention.

She's using a microphone, linked to speakers that are using electricity powered by fossil fuels!!!!🤡🤡🤡 She shouldn't use a mic. She shouldn't just scream so everyone can hear her!!!!

According to MEAWW King Charles has serious reservations about Meghan Markle resuming her Archetypes Podcast for Spotify. The next episode is scheduled for Tuesday, October 4th, and will feature actress and comedian Margaret Cho who will talk about Asian-American tropes in the entertainment industry.
1 DAY AGO
The Independent

Donald Trump took to Truth Social to predict that “war” could be on the horizon after unusual leaks were discovered on Nord Stream I and II, two natural gas pipelines running underwater from Russia to Germany. “This could lead to major escalation, or War!” the former president raged.Meanwhile, his daughter-in-law Lara Trump has come under fire for posting a video of her son outside on a toy car as Hurricane Ian hits Florida. The storm system has hit the state as a category four and federal and state officials have come together in response.The hurricane also caused the Jan...
POTUS・1 DAY AGO
The Independent

Truss to attend European Political Community meeting despite criticism of it

Liz Truss is expected to attend a meeting of the European Political Community, months after the prime minister criticised the Prague summit in her previous role.It is understood that the prime minister has changed her mind about the meeting because it will focus on two high-priority issues on Ms Truss’s agenda: energy and migration.The October summit is French president Emmanuel Macron’s scheme to bring together EU nations and countries outside the bloc. It is believed that the prime minister feels the need to see to now work with other leaders to tackle the crises being fought at home, exacerbated...
POLITICS・5 HOURS AGO
The Independent

The Prime Minister was lost for words at points as she faced her first round of interviews with the press following the economic fallout of the mini-budget.Liz Truss engaged in a lengthy pause on one occasion when asked by a local BBC radio station about the impact of her tax-cutting agenda on people’s mortgages across the UK.The Prime Minister also claimed she would lobby her own Health Secretary and deputy, Therese Coffey, in an attempt to see the roof of one of her constituency’s nearest large hospitals replaced.As Ms Truss defended Government borrowing aimed at cutting taxes to promote...
BUSINESS・6 HOURS AGO

Veteran broadcaster David Dimbleby made a rare outspoken remark while on air as he discussed the UK’s economic turmoil of recent days with the BBC.The former Question Time host said the “massive change” announced by the Government at a time when members of the public were being forced to make tough decisions was “a complete shitstorm” for some people.It comes less than a fortnight after Dimbleby came out of retirement to front the BBC’s coverage of the Queen’s committal at Windsor Castle.During Thursday’s episode of the broadcaster’s Newscast podcast, host Adam Fleming told him: “I should make clear, you don’t...
INCOME TAX・3 HOURS AGO
The Independent

Mark Hamill has been recruited by Ukrainian president Volodymyr Zelensky to help fundraise for his country’s military efforts in the ongoing conflict with Russia.The Star Wars actor said he was “honoured” to take on the role of ambassador for the United24 platform.His role will include raising funds to support Ukrainian defenders, the Drone Army, a project set up by the Ukrainian government to procure unmanned drones to assist the war effort.The Army of Drones will be used to monitor the 2,470km front line and provide an effective response to enemy attacks, the project’s website said.Sharing a picture of himself in...
ADVOCACY・5 HOURS AGO
The Independent

The Conservative Party faces an existential threat after Labour surged to a 33-point lead in one poll in the fall-out from Liz Truss’s mini-Budget, a Tory MP said on Thursday evening. Sir Charles Walker suggested the Conservatives would “cease to exist as a political party” if the 33-point lead is repeated at a general election. “We’ve made our bed, we’ve got to lie in it,” he said, speaking to Channel 4. Meanwhile, Labour MP Jess Philips tweeted that she was “speechless” following the huge surge in points for her party which saw Labour up by nine points to 54...
ELECTIONS・1 HOUR AGO