At House Digest, we work hard to make sure you can live well. We cover home renovation trends, home design trends, and more. Our team of writers and editors have years of experience working in the home and garden media space. Do you need to know the best color to paint your walls, how to find the right plants for you, or need some serious celeb home inspo? House Digest gives you everything you need to make your house into a home.

Inside A $275K Home That Features A Pool, Game Room, And Bizarre Feature 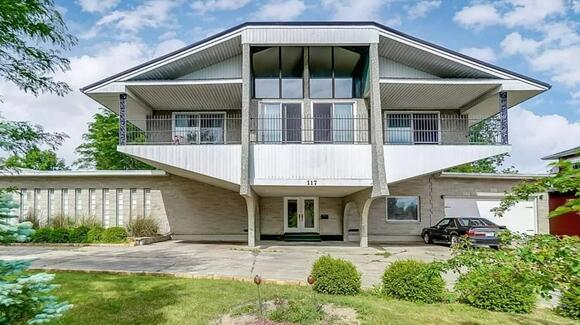 In the world of real estate , there are all sorts of euphemisms to describe a property in subtle terms, according to U.S. News & World Report . For example, "cozy" tells you that the room is very small and confining. In the case of 117 North Brandon Avenue in Celina, Ohio, currently for sale for $275,000, the term would be "quirky." The entrance to the sprawling 6,467-square-foot house leads into a two-story great room with an enormous hanging chandelier. On the second floor, a hallway runs along all four sides of the opening overlooking the great room, and provides access to four bedrooms; each has its own full bathroom, according to the listing description on Zillow .

While everything sounds pretty standard so far, it's the walk from the great room to the kitchen that takes you past the two-room jail cell. Is this another way of saying the time out room? Interestingly, the two beds in the cell can be stacked as bunk beds or placed side-by-side. 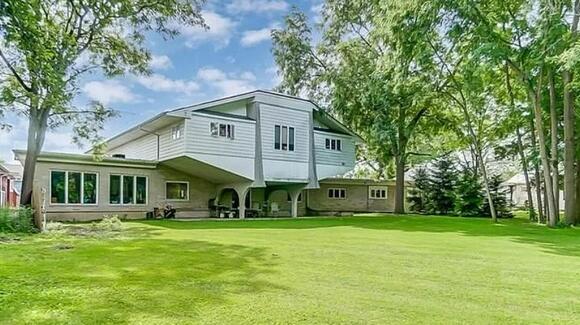 The galley-style kitchen is probably the most traditional looking room in this unusual house. Both walls are lined with cabinets painted in an attractive Wedgewood blue color and stainless steel appliances. A bank of three casement windows look out at the grassy and level yard that includes an additional parcel for an oversized backyard, according to the listing agent, Superior Plus Realtors . Just on the other side of the kitchen, there is a game room with diner-style booths, a jukebox, and a pinball machine. A bar separates the game room from the kidney-shaped indoor swimming pool.

The house was built in 1972 on a slab foundation, and also includes an attached two-car garage. A half bathroom shares space with a laundry room, and there's also a spa and a sitting room with a fireplace on the first floor. Upstairs, there are three more diner-style booths with tables and a second kitchen.

Plenty Of Space For Entertaining 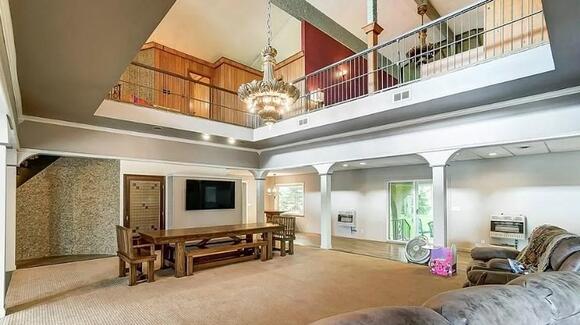 This large house offers plenty of space for entertaining family and friends both inside and out, including a covered patio along the grassy, private yard. Superior Plus Realtors describes three separate bonus rooms, meaning there is room for everyone to have hang-out space, too. Newer flooring, a new roof, and a new ceiling and walls in the pool room are listed as updates. Real estate taxes are about $277 per month, and the property is connected to city sewer and water. It has forced hot air heat and central air conditioning.

The property is located just 2 miles from Grand Lake St. Mary's -- which was originally built as a reservoir -- but now has 52 miles of shoreline with four public beaches, campgrounds, and eight state-operated boat launch ramps, per the Ohio Department of Natural Resources . They add that when it was built, Lake Grand St. Mary's was the largest reservoir in the world, and was considered important in opening up the Northwest Territory.

Your Very Own Jail Cell 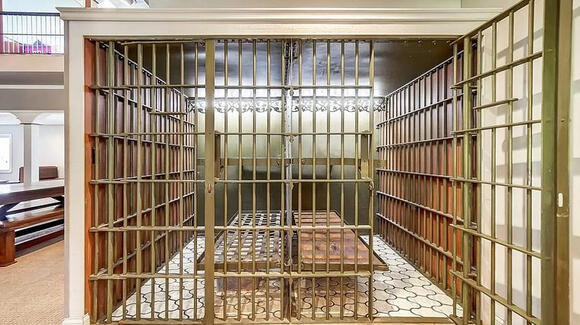 Zillow reports that this Ohio house will only be shown to serious, pre-approved buyers -- but that may be a way to avoid the attention of curiosity-seekers who just want to see what a real time out room looks like. There is plenty of potential for the right owner who can look past the multitude of design finishes from the patterned linoleum in the jail to the two types of wood-look, vinyl plank flooring, wall-to-wall carpeting, and different-paneled ceilings in the kitchen, above the pool, and throughout the rest of the house. Vintage bathroom vanities, wall tile, and paneling on the bedroom walls add interesting details. The outside of the house is faced with a combination of aluminum siding, stone veneer, and brick.

There are signs of cracks and water damage along the vaulted ceilings of some of the upstairs rooms, and numerous cracks in the concrete slabs at the front and back of the house, according to photos on Zillow. Celina, Ohio was unfortunately devastated by an EF-3 tornado that hit the town over Memorial Day weekend in 2019, although there is no mention as to whether this property suffered any damage.

Read this next: Celebrity Homes That Are Super Weird

At House Digest, we work hard to make sure you can live well. We cover home renovation trends, home design trends, and more. Our team of writers and editors have years of experience working in the home and garden media space. Do you need to know the best color to paint your walls, how to find the right plants for you, or need some serious celeb home inspo? House Digest gives you everything you need to make your house into a home.