Dustin Lynch, Lita Ford, and the best and worst of Summerfest's Day 2, Weekend 1 in Milwaukee (without Justin Bieber) 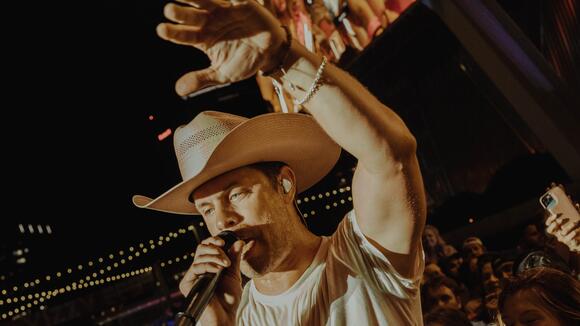 For the first time since 2019, the main stage at Summerfest was dark Friday night.

Pop star Justin Bieber, who had sold out his twice-postponed show at the American Family Insurance Amphitheater, had to postpone his Milwaukee date again, along with the rest of his North American shows in June and July, as he deals with the effects of Ramsay Hunt syndrome, which has left his face partially paralyzed. The late decision left Summerfest without enough time to book a replacement act.

That's not to say there weren't big and familiar names performing on the Summerfest grounds Friday night. Here's how some of the best and worst of them went.

Nearly a decade ago, critic Jody Rosen coined the term “bro country.” Since then, the founding fathers of the genre, Florida Georgia Line, have spawned many sons, among them Dustin Lynch.

Lynch wasted no time getting the party started. Two songs in, he handed a plastic “drinking helmet” to a beaming fan in the front row. After the crowd encouraged the fan and yelled “Chug! Chug! Chug!” Lynch smiled and said, “Any time you need another beer, get my attention and we’ll fill you up.”

Even though most of his songs sound nearly identical — a little bit of Southern twang, a little bit of '90s rap flow — Lynch’s real strength as a performer is keeping a crowd engaged. Before sampling Justin Bieber during “Good Girl,” he took a close look at the audience full of Daisy Dukes and cowboy boots.

“Summerfest,” he said with a flirty wink, “has no shortage of beautiful country girls.”

It was a fun-filled night for country fans of all ages. You’d never have believed the Big Gig is 570 miles north of Nashville.

Friday was hair metal day at Summerfest's Uline Warehouse as the Live To Rock Tour, headlined by Skid Row and Warrant, took over the stage. Following a hot, crowded afternoon set by Quiet Riot, Lita Ford emerged; her entrance music was Accept’s “Balls to the Wall,” naturally.

Flashing fire-red pants and a matching B.C. Rich Warlock, Ford was particularly film-friendly, inviting a camera crewperson onstage to capture some pre-announced “blistering twin guitar work” during “Back to the Cave.”

Then out came the white double-neck guitar for “If I Close My Eyes Forever.” A pity Ozzy Osbourne is still recovering from surgery, or surely he would’ve made the journey to sing his parts. Instead, guitarist Patrick Kennison pulled off double duty admirably. Ford only played one tune, “Cherry Bomb,” by the band that first made her famous, but the spirit of The Runaways is not dead.

The Steve Miller Band has amassed an impressive number of FM radio hits over the years, and the massive crowd at the BMO Harris Pavilion Friday night was clamoring to hear all of them.

The band, fronted by Milwaukee native Miller, opened with 2017's driving "Stranger Blues," followed by a long version of the groovy "Fly Like an Eagle" (which included a wicked solo by keyboardist Joseph Wooten).

Miller, now 78, acknowledged his godfather, guitar legend and Waukesha native Les Paul, and Paul's influence on his music career. Then he pulled out a Les Paul guitar and played the riff-heavy "Jet Airliner" — with the crowd belting out the lyrics.

Other hits included the swaggering "The Stake" and disco-esque "Abracadabra." The Steve Miller Band also stayed true to its electric blues and psychedelic roots, including on signature hits "Living in the U.S.A." and "Space Cowboy."

Most bands that survive four decades experience their share of drama. For Violent Femmes and their fans, that drama is essentially nonexistent at their live shows.

It’s a quality they’ve rarely captured on record, and it’s their lasting legacy in Milwaukee’s music scene — to be so unlike other bands.

The turnout Friday night at the Generac Power Stage was impressive but not uncomfortable. The band sounded almost exactly as they've sounded for decades; Gordon Gano still sings these songs with all the dynamic yearning he’s known for, and the trio remain surprisingly versatile as players.

And they’ve still got the attitude to rock out a song like “Gimme the Car” and drown out the noisy stages flanking them.

“I Danced” went to shambles, but it was just an endearing quirk of the set. “That’s the first time I thought I was right, and I was!” Gano quipped as bassist Brian Ritchie took the fall.

Noisy, obnoxious, weird — surely by now, no surprise to anyone.

The best way to describe a Dillon Francis show is loud. Really loud.

The electronic music producer and DJ put on a show for the ages — or, seemingly, for every Gen-Z’er in the Milwaukee area — at the Miller Lite Oasis Friday night. Accompanied by insane lights and 3-D video production, Francis stood atop his irregularly tall DJ booth and slayed the crowd. Commencing with a remix of ragga anthem “I Like to Move It,” he worked through a myriad of EDM and house songs that everyone seemed to know.

The excitement Friday really came from the audience. While Francis is a good DJ, the audience really drove this one home with screams that could be heard two stages away.

The 22-year-old Texas native brought his upbeat blend of tunes to the Briggs & Stratton Big Backyard Friday. Dressed the part in sunglasses, black pants and a vintage patchwork shirt, he was all smiles as he bopped through his set.

Dayglow's set included songs such as "Fair Game" from 2018's "Fuzzybrain" (which he started working on when he was just 17), synth-pop jam "Hot Rod" and a new track, "Then It All Goes Away."

The band, clad in matching black jumpsuits, short-sleeved white shirts and black ties, also embraced the chill '70s vibe. Struble was the same age as much of the crowd, very impressive for a 6 p.m. time slot, and pretty mellow.

"This is our first time in Milwaukee," he said. "Let's freaking dance, people!"

Alexandra Kay’s backing band of black-clad dudes preceded her on stage Friday night at the UScellular Connection Stage, feigning hard rock before Kay emerged to sing “We Wouldn’t Be Us.”

Sure, there would be a few guitar solos and crunchy riffs, but this was a pop county concert through and through.

“I’m a ‘90s country girl,” Kay admitted while discussing her viral “coffee covers” TikTok series, which played a major role in catapulting her to fame. She’d just done a medley of hits including Randy Travis’ “Forever and Ever, Amen” (which she had performed in Travis’ kitchen), but gave special attention to perhaps her breakthrough cover, a version of Tim McGraw’s “Don’t Take the Girl.”

Kay wasn’t shy about praising her influences; she gave as many shout-outs to social media platforms as humans. Such is the nature of the modern hustle.

“This is my first Summerfest I’ve ever played,” she said before her last tune, “and I think it might be my favorite one ever.”

Most bands don't break up and regroup nearly 20 years later. But it's worked out well for The Breeders.

Arguably one of the coolest bands of the '90s, The Breeders reunited in 2013 and have been playing shows regularly since the release of their 2018 album, "All Nerve."

Their Friday night show at the Generac Power Stage featured the band's '90s lineup: Kim Deal on vocals and guitar, her twin sister Kelley Deal on guitar, Josephine Wiggs on bass and Jim MacPherson on drums.

"We're excited to play some songs for you this beautiful evening," Kim Deal said, before launching into the surf-tinged "No Aloha," followed by the peppy "New Year."

The Breeders' signature sound — distortion-heavy, psych rock-influenced guitar riffs and heavy bass and drums, combined with Kim Deal's serene vocals — was as tight as ever.

In honor of Paul McCartney's birthday last week, the band played a heavy cover of The Beatles' "Happiness Is a Warm Gun," with both Deal sisters on vocals.

Earlier on the show, the mixed-ages crowd seemed somewhat distracted, on their phones and chatting with friends.

But ears perked up when Wiggs announced before the power-rocker "Hellbound": "This is a very old song. And it's about an abortion," referring to the Supreme Court decision announced Friday morning. After "Hellbound," as well as the band's radio hit "Cannonball," the band was met with enthusiastic applause.

Jeffrey Dahmer killed 17 people before his crimes were discovered. These are the victims and what we knew about them

Those involved with the Netflix show "Monster: The Jeffrey Dahmer Story" have said the goal was to tell the victims' stories and not provide Dahmer's point of view. But the 10-episode series spends little time with anyone besides Dahmer. That focus has led to criticism of the show, both from media outlets and from family members...
PUBLIC SAFETY・1 DAY AGO