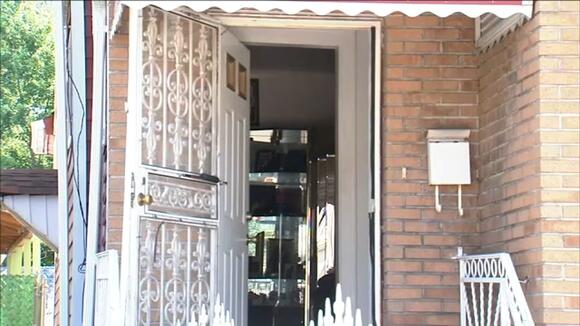 Three people were found dead inside a Queens home Friday. Police officers responding to the home on 155 Street in South Jamaica at around 2:15 p.m. found a 22-year-old woman's body on a bed on the second floor of the residence. Additionally, the bodies of a 55-year-old woman and 37-year-old man was discovered in the basement of the home. The woman had been stabbed multiple times and the man had suffered severe head trauma, according to police. A person of interest was taken into custody at the scene, but further investigation revealed that he was a relative of the victims who had made the 911 call and he was released. Police said the investigation remains ongoing at this time. The identities of the victims have not yet been released. The Office of the Chief Medical Examiner will determine the exact cause of death for each victim. ALSO READ: Woman held hostage in NYC uses Grubhub food delivery to alert police

A 24-year-old woman, held against her will and raped at a home in the Bronx, used a Grubhub food delivery order to alert police to her location.

Woman in pool struck by tree, killed in Bronx

A woman in her 50s was struck by the tree and pronounced dead at the scene.
BRONX, NY・10 MINUTES AGO
ABCNY

Four-year-old Mario Rosario was on the scooter with his father and suffered severe head injuries. He was pronounced dead at St. Barnabas Hospital.
BRONX, NY・10 MINUTES AGO
ABCNY

Police: Suspect tried to rob man in victim's own backyard in Brooklyn

Police say the suspect tried to break into the victim's car before he approached the man in his backyard.
BROOKLYN, NY・20 HOURS AGO
ABCNY

Police say the Housing Authority officer had chased an emotionally disturbed man into the Myrtle-Willoughby Avenue station in Bed-Stuy around 11:15 a.m. Sunday.
BROOKLYN, NY・13 HOURS AGO

It happened around 7:15 p.m. Sunday at Myrtle and Seneca Avenue in Ridgewood.
QUEENS, NY・3 HOURS AGO
ABCNY

It happened around 8:15 a.m. Sunday as the man was sitting on a park bench at Reinaldo Salgado in Bed-Stuy.
BROOKLYN, NY・17 HOURS AGO
ABCNY

The flames broke just before 8:30 p.m. Friday on the second floor of a three-story home on Gary Court in the Bulls Head section.
STATEN ISLAND, NY・8 HOURS AGO
ABCNY

Teen stabbed outside Nike store in Midtown during dispute

Police say the 19-year-old victim got into some sort of a dispute with a group outside the store on East 52nd Street and 5th Avenue when he was attacked around 5 p.m. Sunday.
MANHATTAN, NY・15 HOURS AGO

"He was my backbone. I'm lost right now, my children here. I don't know what to do right now. I am lost, I am lost in this world," Gyiham said.
QUEENS, NY・20 HOURS AGO
ABCNY

Police say Diego Diaz, 19, attacked an 84-year-old man on the same day as the other attack.
NEW YORK CITY, NY・1 DAY AGO
ABCNY

The robbery suspects got away with an undisclosed amount of cash and jewelry from the victim.
NEW YORK CITY, NY・42 MINUTES AGO
ABCNY

A 14-year-old has been charged with murder after another teen was shot in the chest inside the lobby of a Bronx apartment building.
BRONX, NY・1 DAY AGO

Anthony Nelson is hospitalized with a broken nose and a broken collarbone - he was working on what was supposed to be his day off on Thursday at the Pelham Bay Park section. A rider notified Nelson around 9 a.m. that a man was outside the station harassing others.
NEW YORK CITY, NY・2 DAYS AGO
ABCNY

It happened around 7:15 p.m. Sunday at Myrtle and Seneca Avenue in Ridgewood.
QUEENS, NY・1 HOUR AGO
ABCNY

Man found dead at bottom of garbage chute in Brooklyn

The man's body was found at the bottom of the chute in the Gates Avenue building.
BROOKLYN, NY・3 DAYS AGO
ABCNY

Police have arrested a man on charges in the deadly hit and run early Sunday morning in Suffolk County.
RONKONKOMA, NY・13 HOURS AGO
ABCNY

A portion of the merchandise included bags from Gucci and Chanel to fake watches, sunglasses, and sneakers.
MANHATTAN, NY・2 DAYS AGO
ABCNY

The attack stemmed from a dispute inside the store which is located on Sunrise Highway in Patchogue.
PATCHOGUE, NY・1 DAY AGO
ABCNY

A $5,000 reward is being offered as police investigate the destruction of federally-protected bird eggs and nests in Queens.
QUEENS, NY・3 DAYS AGO
ABCNY

The flames destroyed the decommissioned buses which were sitting in a lot at Cedar Creek Park in Seaford.
SEAFORD, NY・1 DAY AGO