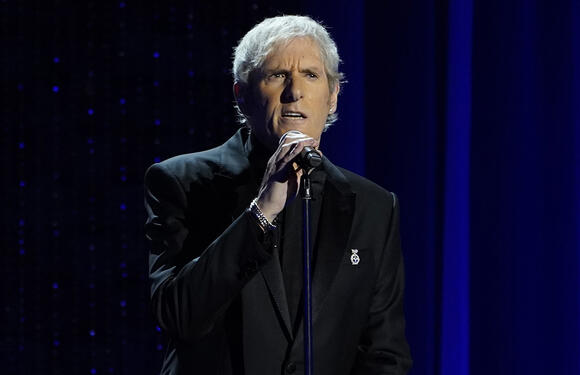 Michael Bolton has had a long and successful musical career. The rocker will be performing singing his new song “Beautiful World” at the 2022 Daytime Emmys on June 24, and will perform again during the ceremony’s “In Memoriam” segment.

Posing alongside Tamron Hall, Bolton arrived on the red carpet in a black suit and bowtie with sleek black shoes.

From hits like, “Time, Love and Tenderness” to his immensely generous charity work, Bolton has been an entertainment fixture. Here, some of his red carpet appearances through the years.

Bolton and his then-girlfriend and Nicollette Sheridan were spotted laughing and smiling after an Oscars party on March 6, 2006. The pair dressed to impress, Bolton wearing a black suit and blue button-up with sleek black dress shoes.

The rockstar stepped out of his hotel on Aug. 14, 2008, in a casual denim-centric outfit. The star wore slouchy denim, a black button-down, and low-top converse in true rocker fashion. Bolton slung a black sweatshirt over his shoulders and donned a black Nike hat, carrying on with his night.

Bolton seems to be a big fan of black attire. The star was out in Beverly Hills, Calif., running errands wearing classic blue jeans, a black button-up, and casual black loafers. Bolton put on shades to finish off the look.

Bolton represented his home state Connecticut on ABC’s “American Song Contest” in a classic suit . The star wore a dark blue button-up underneath the suit and black chucks, keeping the outfit casual.

Fran Drescher hit the red carpet at Variety’s Power of Women event yesterday in Beverly Hills, Calif. dressed in a black and white ensemble inspired by men’s suiting with peekaboo footwear. The actress was suited up in a cropped black double-breasted blazer which she wore overtop a sparkling silver mock neck top, the metallic shine contrasting the stark black garment in a pleasing manner. For bottoms, the “Happily Divorced” star donned pleated slightly oversized black slacks to match her blazer, the simple silhouette and color making the trousers extremely versatile. Drescher wore her dark brown tresses back and out of her face,...
BEVERLY HILLS, CA・1 DAY AGO
Footwear News

Elizabeth Olsen made a daring arrival at Variety’s Power of Women event held in Beverly Hills yesterday, the star dressed in black from head to toe. Olsen spoke about her support of The Rape Foundation / Stuart House which serves as an innovative, internationally recognized model for the treatment of sexually abused children. Trading in her superhero garb for red carpet wears, the “WandaVision” star wore a romantic Rodarte shiny silk black floor-length mock neck gown with exaggerated sleeves and dainty lace detailing on the chest, cascading in layered down the sleeves, and across the waist of the garment. The style was...
BEVERLY HILLS, CA・1 DAY AGO
Footwear News

Kathryn Hahn attended Variety’s Power of Women decked out in a chocolate brown dress. The actress took to the red carpet in a brown sleeveless dress with a long train cape attached by Emilia Wickstead, bringing just the right amount of drama for the occasion. She accessorized with a pair of cascading floral design chandelier earrings from Irene Neuwirth and a black crocodile embossed handbag by Alexis Bittar with a large silver double hoop top handle. She finished off the look with a pair of black spool heels from By Far, giving a lesson in how to wear black and brown...
CELEBRITIES・1 DAY AGO
Footwear News

It was a family night for Sarah Jessica Parker who was accompanied by her husband Matthew Broderick and their twin daughters Marion Broderick and Tabitha Broderick at the “Hocus Pocus 2” premiere. The group made a fashionable appearance on the purple carpet at the AMC Lincoln Square Theatre in New York City on Tuesday night. Marion and Tabitha looked stylish for the evening. The 13-year-old twins posed for photos alongside their parents in peep-toe heels from their mother’s SJP collection. Marion paired her burgundy embellished heels with a shimmering cocktail dress. While Tabitha elevated her black mini dress with sparkling purple heels. Parker...
NEW YORK CITY, NY・2 DAYS AGO

Hillary Clinton was formally outfitted for Variety‘s Fall 2022 Power of Women event. Held in Beverly Hills, the occasion honored the accomplishments of numerous women across different fields. Clinton arrived for the occasion with her daughter, Chelsea, wearing a black evening suit. Her ensemble featured a black pantsuit with long trousers, as well as a round-collared jacket with thinly beaded sleeves atop a pale pink and orange blouse. Completing Clinton’s ensemble were natural pearl earrings and a matching necklace. For footwear, Clinton finished her ensemble with black leather heels that featured triangular pointed toes, giving her outfit a sharp and decidedly...
BEVERLY HILLS, CA・1 DAY AGO
Footwear News

Madonna’s youngest son David Banda celebrated his 17th birthday with a disco-themed bash. The event turned into a family affair as he was joined by his twin sisters, Madonna’s adopted daughters Estere and Stella Ciccone. On Sunday, the pop icon uploaded a video on Instagram from the night’s...
CELEBRITIES・4 DAYS AGO
Footwear News

Chelsea Clinton was sharply suited for Variety‘s Fall 2022 Power of Women event. Held in Beverly Hills, the occasion honored the accomplishments of numerous women across different fields. Clinton arrived with her mother, Hillary, as well as actress Sandra Oh, in a deep red jumpsuit. The wine-hued ensemble featured a folded sleeveless bodice and silky texture, complete with long pleated trousers. Clinton finished her tonal ensemble with a delicate gold necklace with small pendant accents. She also accented her outfit with a pair of metallic gold sandals; though the open-toed pair wasn’t fully visible, they did appear to feature squared toes...
BEVERLY HILLS, CA・1 DAY AGO
Footwear News

Sarah Jessica Parker attended the premiere of “Hocus Pocus 2,” the beloved classic’s reboot getting many to brush their brooms off and get witchy just in time for Halloween. The premiere, which took place at the AMC Lincoln Square Theater in New York yesterday, saw the former “Sex And The City” star chicly dressed in a blooming Armani Privé set, along with vibrant footwear. An undeniable style icon, Parker showed out in a teal long sleeve mandarin top with a high neck, the garment featuring florals in bright pink fading into a gradient of a lush purple. Every hem of the...
NEW YORK CITY, NY・2 DAYS AGO

Hilaree Nelson, ski mountaineer and an ambassador for The North Face, has died. According to multiple reports, the body of Nelson, 49, was located by rescuers on the southern slope of Mount Manaslu in Nepal, the eighth highest mountain in the world. Nelson’s death was confirmed today by the Embassy of the United States in Nepal.  “We are deeply saddened by the death of American adventurer and mountaineer Hilaree Nelson at Manaslu Mountain. We would like to express our heartfelt condolences to the family and friends of Nelson. Her spirit and bravery will continue to inspire us,” the embassy wrote via Twitter.  Reports surfaced...
PUBLIC SAFETY・2 DAYS AGO
Footwear News

Drew Barrymore made an elegant fashion statement at the Clooney Foundation For Justice’s first Albie Awards in New York City last night. Barrymore wore a black crew neck dress with a matching cape detail that gathered around the neckline. The floor-length dress was a part of a previous Brandon Maxwell collection.
NEW YORK CITY, NY・6 HOURS AGO
Footwear News

Anthony Vaccarello is not one to shy away from the provocative. In his seven years as creative director of Saint Laurent, the Italian designer has left his mark on the French heritage brand though a lot of skin-baring, sexed-up looks, mixed with Yves Saint Laurent’s original use of color and shape. For the brand’s summer ’23 collection, however, Vaccarello kept things more covered up — in a way. Instead of outright skin-baring looks, the creative director turned to sheer knits to showcase a slinky look for next year. Vaccarello referenced dancer and choreographer Martha Graham and a 1930 routine in which she...
DESIGNERS & COLLECTIONS・2 DAYS AGO

Kim Kardashian had a glistening moment at the Dolce & Gabbana afterparty on Sept. 24. The businesswoman was sparkling head to toe as she arrived struggling to walk into the designer brand’s event this weekend. In a video shared by her former assistant and close friend Steph Shep, Kardashian...
CELEBRITIES・4 DAYS AGO
Footwear News

Retailers like Walmart, Target and Amazon Are Bracing For Hurricane Ian

Retailers across Florida and beyond are preparing for the impact of Hurricane Ian, which is already hitting parts of the western coast of Florida and nearing Category 5 status. As one of the most powerful storms to hit the U.S. in years, the impact could stretch inland to other parts...
FLORIDA STATE・2 DAYS AGO
Footwear News

Jennifer Garner is giving fans a glimpse into her family’s farm. The actress recently took to TikTok, posting a wholesome video of herself and her Uncle Robert weighing sweet potatoes to her nearly 3.4 million followers. The video, which has amassed close to 530,000 likes, features her uncle guiding...
BEHIND VIRAL VIDEOS・4 DAYS AGO
Footwear News

Keke Palmer shone in vibrant color on Time magazine for her appearance on its 2022 Time100 Next list. On the magazine’s latest cover, the “Nope” star posed for photography duo AB + DM in a dramatic Del Core gown. Her ensemble featured a green and white ombre off-the-shoulder top with flowing sleeves, as well as a mini-length skirt and lower tier connected by silver metal accents, creating a cutout effect. Finishing Palmer’s Wayman and Micah-styled ensemble were large silver hoop earrings.
BEAUTY & FASHION・2 DAYS AGO

Irina Shayk took a break from walking a runway show at Milan Fashion Week to enjoy one as a spectator. The supermodel attended Giorgio Armani’s runway show on Sunday in Milan. She sat in the front row alongside Alessandra Ambrosio, Cate Blanchett and many more. To the show, Shayk donned a more masculine look. She wore a black suit, complete with a jacket paired with matching straight-leg black trousers. Under her jacket, the model wore a white button down shirt with a black tie. Shayk skipped accessories and wore her hair down and smoothed down her back. The Russian runway star added...
DESIGNERS & COLLECTIONS・4 DAYS AGO
Footwear News

Amazon is upping its pay for its front-line workers ahead of the holiday season. The e-commerce giant on Thursday announced that average starting salaries for employees in fulfillment and transportation would increase from $18 to more than $19 per hour, marking an almost $1 billion investment over the next year. Depending on their position and location, employees can now earn between $16 and $26 per hour.
BUSINESS・1 DAY AGO
Footwear News

Kate Hudson served glamour on the red carpet for the special screening of “Mona Lisa And The Blood Moon” yesterday at the Hollywood American Legion Post 43 in Los Angeles. Hudson graced the event in a black lace gown with hidden heels. The “How to Lose a Guy in 10 Days” actress’ Oscar De La Renta dress consisted of a delicate off-the-shoulder sweetheart neckline with long lacy sleeves, the gown made of an iridescent nude fabric close to Hudson’s skin tone. The garment was adorned with black lace floral appliqués down to the trailing skirt that seemed to climb and grow as...
LOS ANGELES, CA・1 DAY AGO
Footwear News