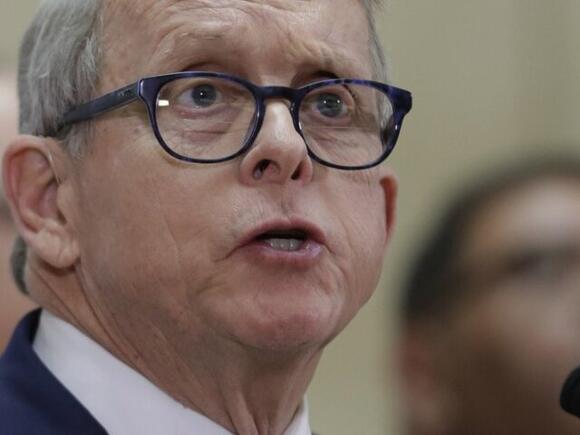 The Heartbeat Bill was signed into law Friday night by Governor Mike DeWine as a result of an "emergency adoption", per the release.

Senate Bill 23- commonly known as the "Heartbeat Bill" was signed as a result of the U.S. Supreme Court decision to overturn Roe v. Wade, according to the release.

Ohio Attorney General Dave Yost lifted the injunction earlier Friday to clear the way for the bill to be signed into law.

can't stand this man please vote him out. don't care care if your republican or democrat. anyone else will be better for Ohio. he has short changed us on gun laws, covid, roe vs Wade, unemployment, seniors, infrastructure, light company, just to name a few.

we are voting him out in November . You can take that to the bank.He has done nothing to help but just a handful of Ohioans through the pandemic anyway and we wont soon forget it!!!!!

Exactly what we need. More impoverished, fatherless children running around the streets. This'll be good for crime rates.

An Ohio man is accused of sending about three-dozen feces-filled letters to lawmakers around the country, including Ohio’s 25 Republican state senators in early July.
OHIO STATE・3 DAYS AGO
News 5 Cleveland WEWS

If you had your driver's license laminated between July 2018 and July 2019, you might be entitled to get some money back.
OHIO STATE・1 DAY AGO
News 5 Cleveland WEWS

How Cleveland stands to benefit from the CHIPS Act

Another bipartisan achievement was signed into law by President Biden Tuesday, and it will have a major impact on Ohio.
CLEVELAND, OH・3 DAYS AGO
News 5 Cleveland WEWS

As kids head back to school, there are worries about serious diseases popping up again. Plus, there’s a new 'medical freedom' debate at the state level that could change Ohio’s constitution.
OHIO STATE・3 DAYS AGO

A safe space for kids during domestic relations court hearings in Summit Co.

The Children’s Drop-In Center is a dedicated safe space in the Summit County Courthouse where children can be left during divorce and other potentially traumatic hearings.
SUMMIT COUNTY, OH・18 HOURS AGO
News 5 Cleveland WEWS

Group behind Lake Erie wind turbines anxious to move plans forward and be under construction by 2026 after Ohio Supreme Court ruling.
CLEVELAND, OH・1 DAY AGO

It seemed like the permanent closure of UH’s Bedford Medical Center was a done deal, but the city of Bedford isn’t going down without a fight.
BEDFORD, OH・1 DAY AGO
News 5 Cleveland WEWS

As teachers prepare to return, safety remains a concern

As teachers across Northeast Ohio get ready to return to the classroom, many will do so with concerns about school safety.
OHIO STATE・1 DAY AGO
News 5 Cleveland WEWS

Nearly 5 years after investigators say an Ashtabula County toddler was raped and murdered, the case is once again making waves in the far northeast corner of the state.
ASHTABULA COUNTY, OH・16 HOURS AGO
News 5 Cleveland WEWS

If you're worried about covering the cost of packing your child's lunch every day, or paying for meals offered at school, there are two ways districts participate in the school meal program.
OHIO STATE・2 DAYS AGO

This week, Cleveland City Council unanimously passed a new ordinance designed to protect renters from being evicted for paying rent late or not being able to pay the entire amount.
CLEVELAND, OH・2 DAYS AGO
News 5 Cleveland WEWS

The Middletown Division of Police in Southwest Ohio announced Tuesday that it is now allowing its officers and other employees to show off their tattoos instead of covering them up.
MIDDLETOWN, OH・1 DAY AGO
News 5 Cleveland WEWS

Four months after an Eviction Summit, which was attended by hundreds in Akron, a new report is listing several suggestions to prevent evictions.
AKRON, OH・1 DAY AGO
News 5 Cleveland WEWS

The Akron Mayoral election is coming up next year, and everyone is asking the same question: Will Dan Horrigan run for reelection?
AKRON, OH・2 DAYS AGO
News 5 Cleveland WEWS

Historic ARPA funding has schools planning for the future

Collectively, schools across Northeast Ohio received nearly $1 billion in ARPA funds. How districts have opted to spend their outlays has largely been dependent upon each district’s unique needs.
CLEVELAND, OH・17 HOURS AGO
News 5 Cleveland WEWS