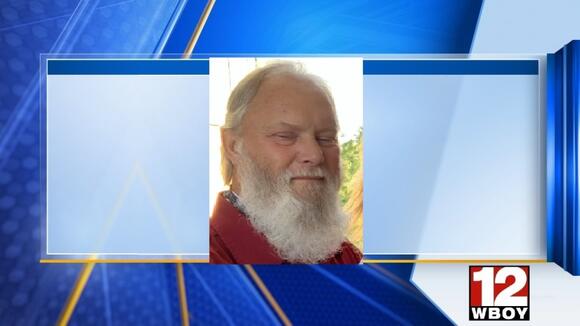 Troopers say they found the remains of John Bryce Westerhausen, 58, in a wooded area between the parking lot and the northbound lanes of I-79 at around 8 p.m. and that he was identified on Wednesday. Troopers say the medical examiner found no signs of foul play.

The investigation is active and ongoing according to troopers. They are asking anyone who saw Westerhausen in the Clarksburg or Grafton area on the evening of June 21 to call them at 304-627-2300.

The state police say John Bryce Westerhausen was reported missing Thursday night after he was last seen in Clarksburg on Tuesday, June 21 at around 7:30 p.m. He was driving a red, 2016 Chevrolet Silverado, quad cab pickup truck, possibly headed to the Grafton area, according to police.

He is described as 5’7″, weighing about 220 pounds with blue eyes, gray hair, a long, gray-colored beard, a cross tattoo on his left bicep and a barbed wire tattoo on his right bicep.

Anyone with information on his whereabouts is asked to call the Bridgeport Detachment of the West Virginia State Police, Sgt. K. H. Totten III at 304-627-2300.

State police Monday shared the same information with media, indicating the search for Westerhausen was still on.

The Clarksburg Police Department have posted on Facebook that they are searching for a juvenile that has been reported missing.
CLARKSBURG, WV・2 DAYS AGO
WBOY 12 News

Around 1:30 p.m. today, an accident was reported on I-79 Southbound between mile marker 143 and 146, leading to the closure of the road and the diversion of traffic through Smithtown Road.
MONONGALIA COUNTY, WV・22 HOURS AGO
WBOY 12 News

HARRISON COUNTY, W.Va. (WBOY) — County Route 50/9, Old Davisson Run Road in Harrison County will undergo a total closure on Wednesday, Aug. 17 so that West Virginia Department of Transportation Division of Highways (DOH) crews can repair a culvert. The closure will last from 7 a.m. to 4 p.m. and start at the intersection […]
HARRISON COUNTY, WV・4 HOURS AGO
WBOY 12 News

CLARKSBURG, W.Va. – 12 News is producing a weekly look at the trends in active coronavirus cases in north central West Virginia. This recap is released on Fridays, and it shows how the number of active cases has changed from the previous Friday. For the purposes of this report, these recaps will focus on Barbour, […]
HARRISON COUNTY, WV・2 DAYS AGO

BELINGTON, W.Va. (WBOY) — A man has been charged after a traffic stop for a cracked windshield that resulted in deputies locating more than 2 ounces of marijuana in Barbour County. On Thursday, deputies with the Barbour County Sheriff’s Department conducted a traffic stop on a vehicle at the intersection of Marysville Run Road and […]
BARBOUR COUNTY, WV・5 HOURS AGO
WBOY 12 News

Man found dead from 3 gunshots in Grafton home, another charged

GRAFTON, W.Va. — A man has been charged with murder after allegedly shooting another man three times at a residence in Taylor County. Troopers with the Taylor County detachment of the West Virginia State Police Wednesday responded to a shooting call at Thomas Farm Road in Taylor County, according to the criminal complaint. While on […]
TAYLOR COUNTY, WV・4 DAYS AGO
WBOY 12 News

CLARKSBURG, W.Va. (WBOY) — An inter-state scheme is targeting older women trying to grocery shop in Clarksburg, police told 12 News Friday. According to the Clarksburg Police Department, shoppers are being asked to stay alert due to a suspected multiple-state theft ring taking information from victims at the East Point Kroger on Emily Drive in […]
CLARKSBURG, WV・2 DAYS AGO
WBOY 12 News

BUCKHANNON, W.Va (WBOY) — Angel Flight East is a non-profit that charts hundreds of flights each year to get medical patients to their treatment, all free of charge. George Tenney, 66, is one of these patients. A lung cancer survivor from Upshur County, Tenney has flown with Angel Flight over 100 times to get to […]
UPSHUR COUNTY, WV・2 DAYS AGO

UPDATE: 12 News has confirmed more information on this developing story. Click here to read the latest. METZ, W.Va. (WBOY) — Officials are investigating a small plane crash in Marion County. It happened just after 7 p.m. Wednesday near the community of Metz, which is just north of Mannington, according to 911 officials. 12 News’ […]
MARION COUNTY, WV・3 DAYS AGO
WBOY 12 News

Morgantown is in the top 5 most expensive areas in WV

CLARKSBURG, W.Va. (WBOY) – According to the most recent statistics from the National Low Income Housing Coalition, West Virginia is one of the least expensive places to rent an apartment. The Fair Market Rent for a two-bedroom apartment is $800. The report says that in order to afford this level of rent and utilities without […]
MORGANTOWN, WV・2 DAYS AGO
WBOY 12 News

‘No survivors’: 3 killed in small plane crash in Marion County

Today's broadcast has been prerecorded and can be viewed here.
CLARKSBURG, WV・5 HOURS AGO
WBOY 12 News

Man admits to selling heroin and fentanyl near Clarksburg school

CLARKSBURG, W.Va. (WBOY) — A Clarksburg man pleaded guilty Monday to selling heroin and fentanyl near Emmanuel Christian School in Clarksburg’s North View neighborhood. James Curtis Jones, 25, pleaded guilty to one count of “Distribution of Heroin and Fentanyl in Proximity to a Protected Location”, a federal charge. He was charged in connection to events […]
CLARKSBURG, WV・4 DAYS AGO
WBOY 12 News

MAP: Where to avoid during WVU student move in

MORGANTOWN, W.Va. (WBOY) – Students have already begun moving back to Morgantown for the fall semester, but traffic this weekend will be especially bad as 4,500 students move into residence halls this weekend. The Morgantown Police Department posted a map resource to their Facebook page that can help drivers, locals and people who will be […]
MORGANTOWN, WV・3 DAYS AGO
WBOY 12 News

A Fairmont man was sentenced Monday for his role in a drug trafficking conspiracy.
FAIRMONT, WV・3 DAYS AGO
WBOY 12 News

Gun found in bathroom of Clarksburg Kroger; what to do if it happens to you

CLARKSBURG, W.Va. (WBOY) — A mother and her preteen daughter were shocked on Sunday when they went to use the restroom at the Kroger on Emily Drive in Clarksburg and found an unattended handgun in the stall. While the presence of the gun may be shocking, gun safety websites say that finding a gun in […]
CLARKSBURG, WV・4 DAYS AGO
WBOY 12 News

ELKINS, W.Va. (WBOY) – Residents of 14,000 homes in Elkins who use city water could see a major increase on their water bills in the coming month. According to a release from the city, the Elkins Water Board has recommended an emergency rate increase of 32 percent for city water customers, which could hit customers’ […]
ELKINS, WV・2 HOURS AGO