Man accused of killing Perry Co. jailer was out on bond, was convicted of capital murder in ’02 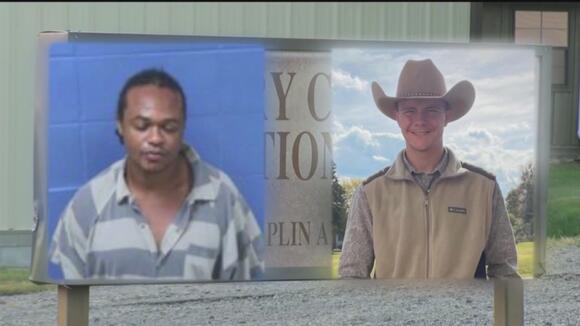 LITTLE ROCK, Ark. – The North Little Rock man facing capital murder charges in the shooting that killed a Perry County jailer has been convicted of before of the same crime.

Court records reveal Roderick Lewis, 37, started having run-ins with law enforcement in 2000, when he was just 15.

Lewis was 17 when he was convicted of capital murder. Records show he shot and killed someone in North Little Rock.

The teen was sentenced to life in prison without the possibility of parole in that case, but a decade later, the United States Supreme Court ruled that offenders 17 years old or younger cannot be sentenced to life without parole.

The court’s opinion applied to Lewis since he was 16 when the killing happened and 17 when he was convicted.

After a negotiated plea, Lewis was released on parole in 2020. He finished that parole in August of 2021.

About three months later in November, though, Lewis was charged with aggravated assault on a family or household member, endangering the welfare of a minor and interference with emergency communication.

He pled not guilty to those charges and posted a $50,000 bond. Prior to the arrest and shooting in Perry County, he was awaiting trial.

Investigators said Lewis had been arrested on suspicions of drug and drug paraphernalia procession and was being booked into the Perry County Jail late Wednesday night when he pulled a gun and then shot and killed Detention Officer Jeremiah Story.

A judge denied Lewis bond during a court hearing Friday. The prosecutor told the judge that Lewis stated to officers during his arrest that he refused to go back to prison, before killing the jailer.

According to the Officer Down Memorial Page , Story is the first line of duty death at the Perry County Sheriff’s Office since 1892. He was 21 years old.

This is sad. I am processing Mr. Story's obit while reading this. He just started living. This dude should have had a longer sentence. He's talking about he isn't going back to prison but is doing everything to go back. I'm glad they didn't kill him, because now he has no choice BUT to go back, and I hope he gets life this time! The jail is also responsible; why wasn't he searched??? This could have been prevented.

who didn't do a thorough body search before he was taken inside the jail?

He should have NEVER been released. My condolences to the Story family.

Additional details in shootings, and charges filed, in Little Rock over an Aug. 14 series of incidents.
LITTLE ROCK, AR・10 HOURS AGO
KARK 4 News

Three shooting incidents have been added to the roster of violence that plagued Little Rock over the weekend, now marking 18 cases in total.
LITTLE ROCK, AR・9 HOURS AGO
KARK 4 News

A 31-year-old Little Rock many faces a slew of serious charges following multiple shootings during a violent weekend in the Capitol City.
LITTLE ROCK, AR・1 DAY AGO
KARK 4 News

Members of the Little Rock Branch of The National Association for the Advancement of Colored People have spoken out after the city saw more than a dozen shootings last weekend.
LITTLE ROCK, AR・13 HOURS AGO

A man believed to be responsible for killing a person at a gas station Sunday night is facing additional charges in another weekend shooting.
LITTLE ROCK, AR・1 DAY AGO
KARK 4 News

Hear how the Little Rock authorities tackled the violent weekend

City leaders and law enforcement officials updated the public with the latest information about a violent weekend that included at least 15 "shooting incidents." They attributed much of it to one man who was arrested Sunday evening.
LITTLE ROCK, AR・1 DAY AGO
KARK 4 News

A string of violence in the Capital City this weekend leaves many in the area speechless.
LITTLE ROCK, AR・1 DAY AGO

One person has been killed and another critically injured in a shooting at a convenience store Sunday night.
LITTLE ROCK, AR・2 DAYS AGO
KARK 4 News

State, county and local authorities are working together to investigate a violent weekend in Pulaski County.
PULASKI COUNTY, AR・2 DAYS AGO
KARK 4 News

PCSO: One dead in Sunday afternoon shooting on Frazier Pike

Every time a life is taken by gun violence, it leaves a grieving family behind, and at least 15 shootings last weekend forced many of those families to relive their trauma.
LITTLE ROCK, AR・1 DAY AGO
KARK 4 News

A man has been injured in an apparent shooting in the College Station community this afternoon, according to the Pulaski County Sheriff's Office.
COLLEGE STATION, AR・2 DAYS AGO
KARK 4 News

Arkansas State Police steps up drunk driving enforcement: What it can cost you

A powerful message high above Little Rock’s interstate 30, it not only can catches drivers attention but it’s bringing awareness to an important topic.
LITTLE ROCK, AR・1 DAY AGO
KARK 4 News

An investigation is underway Saturday after the Little Rock Police Department received a report of shots fired in the Mabelvale Elementary School community Saturday.
LITTLE ROCK, AR・3 DAYS AGO