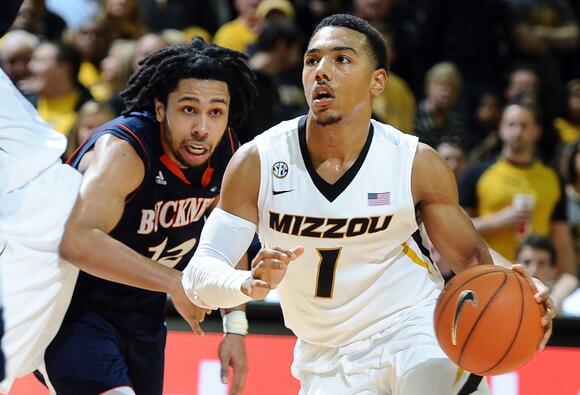 The Missouri Tigers welcomed back one of their all-time great Men's basketball players to the program.

On Monday former Mizzou guard Phil Pressey was hired by the university as an assistant coach, the school announced.

Pressey also announced his return to the program via Twitter.

"While I love this game playing-wise, I'm happy to change my perspective and get into coaching," Pressey Tweeted. "My alma mater @MizzouHoops is a good starting point. Basketball has given me so much, and now it's my turn to do the same."

He will join new head coach Dennis Gates ' staff in his first year at the helm for the Tigers, and it will be Pressey's first opportunity as a coach since ending his playing career.

Shortly after Pressey made his announcement, Gates confirmed the news with a tweet of his own.

"I am excited to open this door," Gates Tweeted. "Transitioning from an outstanding playing career to the sidelines where he can share his knowledge with our student-athletes. Please join me in welcoming back [Phil Pressey] to our staff!"

In his three years at Mizzou, Pressey was a star from Day 1, Averaging 9.7 points, 5.9 assists and 2.0 steals per game for his career. He also started 81 of his 99 appearances for the Tigers.

Pressey would then go on to spend three seasons in the NBA, his first two with the Boston Celtics, where he started 11 games. He averaged 3.2 points and 2.9 assists per game in his NBA career.

The No. 1 Georgia Bulldogs and the Missouri Tigers will face off on Saturday, and that staff has their predictions for the game.
COLUMBIA, MO・1 DAY AGO
Mizzou Sports Talk

Walters discussed how it felt getting in the game against Auburn and how much it meant to him.
COLUMBIA, MO・1 DAY AGO
Mizzou Sports Talk

Here's who the Missouri Tigers offense needs to watch out for on Saturday.
COLUMBIA, MO・2 DAYS AGO

The Sooner quarterback was knocked out of the game after he absorbed a targeting penalty from TCU linebacker Jamoi Hodge.
FORT WORTH, TX・23 MINUTES AGO
Mizzou Sports Talk

A pair of Top-25 matchups are on the schedule and the staff of three different SEC sites makes their predictions.
COLLEGE SPORTS・2 DAYS AGO