House of Prayer churches near military bases in Georgia raided by FBI. Here's what we know 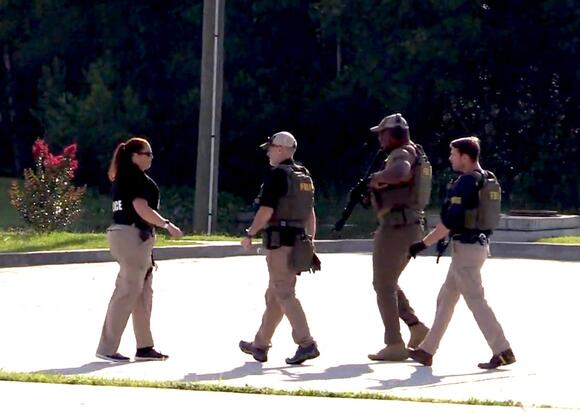 At least three churches in Georgia and Texas, tied to the House of Prayer Christian Church, were raided Thursday by the Federal Bureau of Investigations .

While the FBI has not released information about the raids, former church members and veteran advocacy groups have alleged the churches, which are predominantly located near military bases, target soldiers and operate like a cult.

'We were all obedient': Former members talk about life in House of Prayer Christian Church

Poll: Number of US adults who believe in God has dropped 6% since 2017

Here's what to know about the church and Thursday's raids:

What is House of Prayer Christian Church?

Its churches are primarily located near military bases.

The House of Prayer Christian Church in Hinesville raid

The House of Prayer Christian Church in the 2500 block of Airport Road in Hinesville, less than 8 miles from Fort Stewart, was raided by the FBI just after 8 a.m. Thursday.

At about 7:15 a.m. Thursday, FBI agents raided the Assembly of Prayer church on Tobacco Road in Hephzibah, Ga., just outside of Fort Gordon's Gate 5.

Sgt. William McCarthy with the Richmond County Sheriff's Office said, "We were there to assist them, but referring everything over to the FBI," and could not confirm whether any arrests had been made.

Fort Gordon spokesperson Anne H. Brown said, "Fort Gordon was aware of the organization called the Assembly of Prayer Church through our law enforcement channels but the installation had no bans against the organization or any official dealings with them (despite their websites claims)."

"There were reports made to Fort Gordon law enforcement of recruiting/solicitation attempts by the church members but there were no incidents, confrontations, arrests or anything of this nature as a result."

Raid at Assembly of Prayer Christian Church in Killeen, Texas

An FBI raid took place Thursday on Massey Street in Killeen at the Assembly of Prayer Christian Church, less than four miles from Fort Hood.

Former church member Ashley Demorest, who watched the raid, said she solicited soldiers on base as a member of the church.

"When I was 16 I would go with other members to [Fort Hood] and do what the church would call 'soul winning' to invite people to the church."

Fort Hood spokesperson Christopher Haug said his office was aware of the FBI investigation into the church and military police are checking into it.

This article originally appeared on Savannah Morning News: House of Prayer churches near military bases in Georgia raided by FBI. Here's what we know

When lies appears to be truth God has left. To commit a fraud of any kind is wrong. If you use God for fraud that is wrong. We all must watch who we are following. Trust no man. Our action words and deeds speaks for us. Just because the building is called a church doesn't mean God is there. Non political non racist a veteran.

So we don't know anything about the raid. You could have saved your time on this one

What in the world are they suspected of doing? In reading the article I can only ascertain they had an outreach program. Nothing ominous about that.