A 21-year-old woman who disappeared in May was found buried in a Missouri barn.

Jessi Wilfong was reported missing by her mother, Kathy Wilfong, on May 25 - nearly a week after she last saw her daughter at her Millersville residence on May 19.

Jessi allegedly met up with her uncle, Lawrence Schanda, and his girlfriend, Teresa L. Baumgartner, 59, on the evening she was last seen by her mom, Kathy revealed on The Lawless Files podcast.

Surveillance footage from a neighbor captured Jessi arriving at her uncle's home and never leaving, according to her mother.

Jessi's phone died the night she went missing, Kathy said. As time passed, she knew something was wrong when her daughter didn't update her social media platforms, which she found 'weird.' 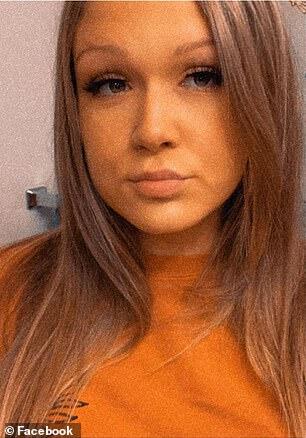 According to a probable-cause statement filed by Det. Jaime Holloway, undisclosed information led investigators at Cape Girardeau County Sheriff's Office to a residence in the county belonging to Baumgartner and Schanda on June 15, The Southeast Missourian reported.

At the home investigators found that carpet from the living room had been removed, KFVS News reported.

'From the evidence collected and other information obtained from the investigative process, it was suspected that foul play was involved in the disappearance of Ms. Wilfong,' Sheriff Ruth Ann Dickerson wrote in a news release.

On June 18, deputies were led to a barn 'in close proximity' to the residence of Baumgartner. Investigators found a portion of the ground recently tampered - where Jessi's remains were later discovered.

Her death was ruled a homicide two days later.

Baumgartner was arrested on June 21 in connection with Jessi's disappearance and charged with tampering with physical evidence in a felony investigation. An auger rented by Baumgartner of May 24 was found in the barn.

Schanda, meanwhile, hasn't been arrested or charged in connection with the case. He did, however, tell officers on June 8 that he had gotten into a verbal altercation with his niece on May 19 after she allegedly provided law enforcement with information about his illegal drug activity.

Why aren't both of them in custody, they're both guilty ?¿ love and prayers for her mother ❤🙏God speed beautiful girl 😇💜🌻

I m betting the "funny uncle" made sexual advances that she rejected, n he killed her for it., n all the obvious evidence, surveillance footage, carpeting etc...

Unimaginable! Yet here we are...articles like this makes me both sad and furious too. My condolences to the parents, family, and friends of this young woman.😔 Gone---taken too soon!!!🙏

There was widespread relief as a Bath teenager reported missing amid growing concerns for her welfare has been found safe, police announced. Ruby, 13, who had been missing for three days, vanished from her home in Bath on Tuesday, August 9. Officers had been very concerned for her welfare and...
PUBLIC SAFETY・1 DAY AGO
Daily Mail

All four siblings who were allegedly abducted from their home are found safe and well after overnight search - as man, 28, with Joker-themed face tattoos goes on the run

Four children who vanished after getting into a car with a man covered in face tattoos have been found safe and well. Joshua Carter, 28, was seen taking the kids from an address at The Leap, north of Mackay, Queensland around 11.30am on Thursday in a white 2005 Nissan Patrol 4WD.
PUBLIC SAFETY・2 DAYS AGO
Daily Mail

'Granddad, I am coming straight home': What 'frightened to death' mother who was 'in a hell of a state' after going missing with her boy, four, in Turkey told family when she learned she was subject of international search

The family of a four-year-old British boy and his mother who went missing after travelling to Turkey have spoke of their relief after both were found safe and well. George Jack Temperley-Wells is believed to have travelled to Antalya with mum Brogan Elizabeth Temperley on June 29 this year before both vanished. They are likely to have spent time with his father, 41-year-old Scott Nigel Wells, while in Turkey.
PUBLIC SAFETY・2 DAYS AGO
Newsweek

The casket was knocked down after the man reportedly got in his car and drove it toward his sister but ended up hitting another woman and the casket.
RICHMOND, CA・3 DAYS AGO

Essie McKenzie's 6-year-old died from her injuries in a Walmart parking lot fire, while her 9-year-old suffered severe burns and lung damage.
FRIDLEY, MN・3 DAYS AGO
The US Sun

Moment hero bystanders save woman under attack from thug, 52, who ‘tried to drown her’ in public fountain

THIS is the shocking moment a man who tried to drown a woman in a public fountain was beaten senseless by rescuers. The 52-year-old man - now facing attempted murder charges - had been cooling off in the water with the woman on August 9. But when a passerby offered...
PUBLIC SAFETY・2 DAYS AGO
Daily Mail

Missing teenager Kiely Rodni was wearing a sweatshirt with eerie Lana Del Ray lyrics on the night before she went missing, police said. Rodni, 16, was last seen Saturday near the Prosser Family Campground in Truckee, California, at the party attended by more than 100 juveniles and young adults, the Placer County Sheriff's Office said.
TRUCKEE, CA・3 DAYS AGO
Daily Mail

Police have arrested five people over the suspected murder of a woman found dead in a house early today. Emergency services were scrambled to a property in Nuneaton, Warwickshire at around 1am this morning. A woman, believed to be in her 40s, was found dead inside. Detectives arrested three men,...
HEALTH SERVICES・1 DAY AGO

A teenager in Pennsylvania died after getting his clothes caught into a wood chipper while he was working his summer job on Tuesday. Isiah M. Bedocs, 17, of Cosplay, was working for a tree removal service when the fatal incident happened on the 3700 block of Excelsior Road in North Whitehall Township around 1.30pm.
PENNSYLVANIA STATE・2 DAYS AGO
Daily Mail

Vindictive dad’s disgusting question after trying to gas himself and his daughter, 3, to death when his wife asked for a divorce

An Adelaide father who attempted to murder his young daughter 'out of spite' and 'vindictiveness' towards his wife has been jailed for 14 years. Shaun Preston Mate, 45, pleaded guilty to the attempted murder of his then-three-year-old daughter days before his Supreme Court trial in June. The dad's desire to...
PUBLIC SAFETY・2 DAYS AGO
Daily Mail

PICTURED: Couple who died in horrific Indiana house explosion worked together and had a flea market table in town: Cops probe cause of blast that leveled 39 homes

Charlie and Martina Hite, two of the three people who died in the horrific Indiana house explosion Wednesday, were partners in marriage and in business with a connection to their community. The couple, 43 and 37, both worked at the same Fresh Market store in Evansville Indiana and also had...
2 DAYS AGO
Daily Mail

Boy, 12, who went missing from hospital where he was being treated for head injury has been found

Police have now found a 12-year-old boy who went missing from a hospital after being admitted with a head injury. Officers from Lancashire Police had been 'very concerned' for the safety of Joseph Steeley, who was last seen at Royal Lancaster Infirmary on Wednesday night. Police said he was receiving...
PUBLIC SAFETY・2 DAYS AGO

Professional dog walker, 34, is mauled to death by 'XL Bully' after he 'collapsed' in park - as 20-year-old man is arrested

The brother of a dog walker who was mauled to death by an 'XL Bully' after he 'collapsed' in a park has paid tribute after a 20-year-old man was arrested in relation to the incident. Ian 'Wiggy' Symes, 34, was walking a customer’s dog at a recreation ground in Fareham,...
PUBLIC SAFETY・1 DAY AGO
Daily Mail

A 33-year-old man has become the ninth person charged with the murder of an 18-year-old who was killed in an attack at a Liverpool internet cafe. Michael Toohey was allegedly set upon at the business in London Road on Saturday, April 16, and later died of multiple injuries. After his...
PUBLIC SAFETY・2 DAYS AGO
Daily Mail

Man, 34, was mauled to death by 'XL Bully' dog after he 'collapsed' in park as 20-year-old man is arrested on suspicion of owning the dangerous animal

A 34-year-old dog walker was mauled to death by a suspected XL Bully while he was walking at a children's park - as flowers were left at the scene of the horrific attack and heartbroken friends and family paid tribute to the beloved local. Ian 'Wiggy' Symes was today named...
PUBLIC SAFETY・2 DAYS AGO
Daily Mail

Dog savages two boys and a woman in horror attack as owner, in his 20s, is arrested for 'also assaulting her and a third boy' and police seize four dogs from home

A young woman and her two children have been savaged during a dog attack as police arrest the owner also for allegedly assaulting a third boy under the age of 16. One bystander said they rushed to help after seeing the boys and their mother in her 20s covered in blood and bite marks in Ilkeston, Derbyshire on Friday.
PUBLIC SAFETY・1 DAY AGO
Daily Mail

Well-wishers raise money to cover court costs of father, 27, who was fined £100 after punching a 12-year-old boy who threw an egg at his ill child

Well-wishers have started a fundraiser to cover the court costs of a father who was fined £100 after punching a 12-year-old boy who three an egg at his ill child. Vincent Peters, 27, had been driving on East Prescot Road near Alder Hey Children's Hospital in Liverpool on August 1 last year when the boy targeted his blue Skoda and hit his young child, who had been suffering from seizures, in the process.
PUBLIC SAFETY・2 DAYS AGO
Daily Mail

'If we waited for the police my dad would still have no car': Daughter, 32, turns detective and finds her father's stolen £12,000 Jaguar XF after becoming frustrated with officers' 'slack' response

A woman who was let down by police ‘incompetence’ was forced to find her 73-year-old father’s stolen car herself after officers failed to do so. Harry Harrington had his £12,000 Jaguar stolen from his driveway in Bournemouth overnight. His daughter Becky Harrington, 32, claimed the police...
PUBLIC SAFETY・2 DAYS AGO
Daily Mail

A driver accused of leaving a woman for dead on the side of a remote road is being questioned by police after their car was discovered and reported to officers. The 47-year-old woman's body was found on the side of Four AK Road at Oakey in Queensland's Toowoomba region at about 8am on Saturday.
TRAFFIC ACCIDENTS・18 HOURS AGO
Daily Mail

Driver who killed mother-of-two nurse, 60, on a pedestrian crossing as he tried to wipe his misted windscreen is jailed for 10 months

An NHS nurse was tragically run over while crossing the road to meet a friend by a driver who had been cleaning his windscreen. Mother-of-two Allyson Pattison, 60, was knocked down by a black Dacia Duster at a zebra crossing in Hull on January 12 last year. The driver, Winston...
PUBLIC SAFETY・2 DAYS AGO