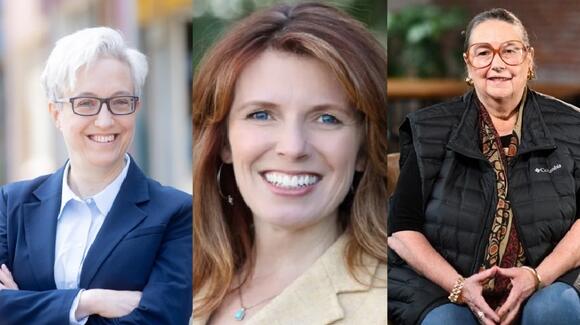 The Republican nominee for governor released a statement Friday morning:

“Despite the U.S. Supreme Court’s decision, Oregon will continue to have among the most extreme abortion laws in the country and around the world. As governor, I will stand up for life by vetoing legislation designed to push Oregon further outside the mainstream.”

Drazen’s campaign would not respond to our requests to clarify her stance on limiting access to abortion.

“I am pro-choice. This is a bedrock issue for me, and frankly, for Oregon. A fundamental right. As Oregon’s independent governor, I will always defend and protect a woman’s right to choose.”

The Democratic nominee for governor released a statement on Friday morning as well, in addition to making time for an on-camera interview with KOIN 6 News.

“Our right to control our own bodies and futures has been gutted. I’m furious,” Kotek said. “I’m deeply concerned for women around the country.”

“Here is what I want Oregonians to know right now: Abortion access is protected here in Oregon, I made sure of that. As House Speaker, I worked to pass the nation’s strongest reproductive health law, ensuring that abortion access would be protected here, no matter what the Supreme Court decides. As your Governor, and the only candidate with the support of Planned Parenthood Advocates of Oregon, Pro-Choice Oregon and The Mother PAC, I will stand up to fight for reproductive freedom. That’s a promise.

With Roe overturned, which states are ready to ban abortion?

“Make no mistake: reproductive freedom is on the ballot in Oregon this year. Republican candidate Christine Drazan supported a measure to block funding for abortion access and sponsored legislation to criminalize abortion providers. She has even bragged about her long-standing support from anti-abortion extremist group Oregon Right to Life.

Kotek also told KOIN 6 Drazan “proudly talks about her support from extreme groups” such as Oregon Right to Life.

“If she’s our governor, that will be a problem for abortion access in our state,” Kotek stated. “Meanwhile, Betsy Johnson just promoted an anti-choice extremist to run ‘Republicans for Betsy.’ With every flip-flop, it’s becoming clearer that Oregonians simply cannot trust her.

KOIN reporter Elise Haas made multiple attempts throughout the day to interview Johnson and Drazan either on-camera or over the phone, but both candidates only responded by email.

now let's make sure that all children are supported by both parents. you make a child, you support it.

Wheather now or later, Oregon is slowly moving to the right, very slow but just look at the votes. Marion county actually voted 52% to 48% for Trump. It’s slow but it’s coming

68 years ago: Oregon tribes stripped of their status

Cheryle Kennedy, the chairwoman of the Confederated Tribes of Grand Ronde, said they are using this date to honor their history.
OREGON STATE・2 DAYS AGO
KOIN 6 News

Could shipping containers act as a complete border wall?

Providing the containers work in the small gap in Yuma, Arizona, many are wondering if this could be a solution for the rest of the southern border.
YUMA, AZ・4 HOURS AGO
KOIN 6 News

U.S. District Judge Leigh Martin May denied Graham’s motion to comply with the subpoena, rejecting his arguments that he has testimonial immunity from state judicial proceedings as a federal legislator.
GEORGIA STATE・6 HOURS AGO
KOIN 6 News

Catherine McMullen is running for Clackamas County clerk, she talks with Ken Boddie about recent setbacks in the elections
CLACKAMAS COUNTY, OR・1 DAY AGO

In Utah, no child support, no hunting or fishing

Utah is seeing a surge in child support payments over the past year, a change that state officials credit in part to a new state law that prohibits hunting and fishing licenses to people who fall significantly behind on payments.
UTAH STATE・1 DAY AGO
KOIN 6 News

Crews are still battling several wildfires on Monday that are burning in central and southern Oregon.
OREGON STATE・2 HOURS AGO
KOIN 6 News

Mayor Monday: The Dalles gears up for Northwest Mural Fest

AM Extra heads to one of the largest cities on the Oregon-side of the Columbia River Gorge.
THE DALLES, OR・6 HOURS AGO

PORTLAND, Ore. (KOIN) — You may have dreamed of having a pet bear as a kid — but can you actually own one here in Oregon? Turns out, it’s a little complicated about what exotic pet species you can own and whether you can get the OK from state and federal regulators. According to the […]
OREGON STATE・2 DAYS AGO
KOIN 6 News

These are Oregon’s largest recorded earthquakes since 2000, according to USGS

It's no secret the Pacific Northwest is earthquake country -- with the possibility of "The Big One" ever-present. Since 2000 Oregon has seen a number of strong earthquakes, according to data recorded by the U.S. Geological Survey.
OREGON STATE・1 DAY AGO
KOIN 6 News

Personal finance site WalletHub weighed all 50 states and the District of Columbia to find the best – and worst – states to give birth and raise a young child.
MASSACHUSETTS STATE・2 DAYS AGO

PORTLAND, Ore. (KOIN) — We’ve heard a lot about inclusive and culturally appropriate education, but what does that really mean? Dr. S. Renee Mitchell, author, activist, mentor, educator and a driving force for the recently-opened Soul Restoration Center is here to answer that question. Watch the full “Give me a Minute” in the video player […]
PORTLAND, OR・1 DAY AGO
KOIN 6 News

Rudy Giuliani has been told he’s the target of a Georgia special grand jury investigating attempts by former President Trump and his allies to overturn the 2020 election results in the state, his lawyer confirmed to The Hill Monday.  Giuliani’s testimony is expected before the special grand jury this week. The New York Times first reported on Thursday that Giuliani […]
GEORGIA STATE・3 HOURS AGO
KOIN 6 News

Best places to live in Oregon, according to Niche

Stacker compiled a list of the best places to live in Oregon from Niche.
OREGON STATE・2 DAYS AGO
KOIN 6 News

Families and children in foster care have an opportunity to learn about a specific type of hair care starting next week.
PORTLAND, OR・6 HOURS AGO
KOIN 6 News

These cities have the fastest-growing housing prices, according to Redfin

Most of the cities on the list are located in just one state, too.
DETROIT, MI・1 DAY AGO
KOIN 6 News

All this week get a juicy deal at the best local burger joints -- it's Portland Burger Week.
PORTLAND, OR・9 HOURS AGO