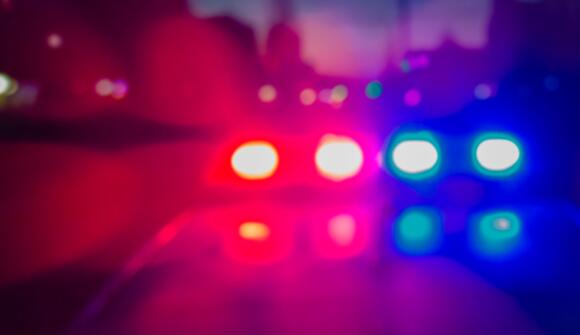 SANTA ANA (CNS) - A 33-year-old man was charged today with threatening Orange County District Attorney Todd Spitzer, his family and his staff in a hate crime.

Michael Joseph Brady was charged with five counts each of criminal threats and threatening public officials with sentencing enhancements for a hate crime, according to court records.

Brady, who was arrested Tuesday, was accused of making the threats on Monday. He listed his occupation as stockbroker and was being held on $1 million bail, according to jail records.

Santa Ana police and prosecutors did not respond to a message, and further details were not immediately available.

A man dubbed the “Blue Cloth Bandit” for his alleged habit of using a cloth to cover a handgun during a string of more than five dozen robberies over a span of nearly two years was in custody today, police said.
LOS ANGELES, CA・1 HOUR AGO
KNX 1070 News Radio

A woman found apparently beaten to death inside her Lancaster home was a Los Angeles County probation officer, and the investigation into the killing was continuing today.
LOS ANGELES COUNTY, CA・2 DAYS AGO
KNX 1070 News Radio

An Amber Alert was issued after a man wanted in a deadly shooting allegedly kidnapped his teenage daughter. On Monday at 7:30 a.m., officers with the Fontana Police Department responded to a call of shots fired at Cypress Avenue and Mallory Drive.
FONTANA, CA・2 DAYS AGO

Survey points to lingering concern over racial profiling by LAPD

The State Bar of California announced today it is investigating well-known Los Angeles attorneys Mark Geragos and Brian Kabateck in connection with the distribution of a multimillion-dollar settlement for Armenian genocide victims.
LOS ANGELES, CA・1 DAY AGO
KNX 1070 News Radio

Police are searching today for suspects who shot and killed two people in the Montecito Heights neighborhood of Los Angeles, according to media reports.
LOS ANGELES, CA・2 DAYS AGO
KNX 1070 News Radio

A 36-year-old felon was behind bars today on suspicion of attacking another man with a hammer in a Garden Grove bar, leaving the victim battling for his life.
GARDEN GROVE, CA・6 DAYS AGO
KNX 1070 News Radio

The Court of Appeal of the State of California on Thursday ruled that Los Angeles County Sheriff Alex Villanueva’s reinstatement of a deputy fired by the previous sheriff was unlawful after years of legal process.
LOS ANGELES COUNTY, CA・5 DAYS AGO
KNX 1070 News Radio

Orange County sheriff’s deputies asked for the public’s help today tracking down potential victims of a phlebotomist in a medical laboratory in Aliso Viejo accused of touching customers in a sexual way.
ALISO VIEJO, CA・6 DAYS AGO
KNX 1070 News Radio

Judge: Warrants to search homes of Kuehl, others properly obtained

A Los Angeles judge ruled the sheriff’s department correctly obtained warrants to search the home of county Supervisor Sheila Kuehl. Still, he ordered the agency to turn over any items seized to the state Attorney General.
LOS ANGELES, CA・5 DAYS AGO

A former student of the Orange County School of the Arts has filed a lawsuit against the Santa Ana Unified School District alleging the school’s founder sexually assaulted him, according to a copy of the suit obtained today.
SANTA ANA, CA・4 DAYS AGO
KNX 1070 News Radio

Man sentenced to one year in jail, probation, for street racing fatality

A Los Angles County man who fatally struck a spectator during an illegal street race in Otay Mesa last year was sentenced today to one year in county jail and two years of probation.
LITTLEROCK, CA・7 DAYS AGO
KNX 1070 News Radio

Man, armed with replica handgun, shot by deputies in Willowbrook

A man, armed with what turned out to be a black replica handgun, is in the hospital today after being shot in the leg by Los Angeles County Sheriff’s Department deputies in the unincorporated area of Willowbrook, authorities said.
LOS ANGELES COUNTY, CA・6 DAYS AGO
KNX 1070 News Radio

A state grant totaling $29.5 million was awarded to Riverside County for the construction of nearly 150 apartments reserved for mentally ill individuals experiencing homelessness or at risk of it, county officials announced today.
RIVERSIDE COUNTY, CA・1 DAY AGO

A bomb threat at Bell Gardens High School prompted an evacuation of the campus today, but no explosives were found by police.
BELL GARDENS, CA・5 DAYS AGO
KNX 1070 News Radio

She claims the city is responsible for the attack because it failed to respond to a rising number of coyote-related incidents that had occurred.
HUNTINGTON BEACH, CA・5 DAYS AGO