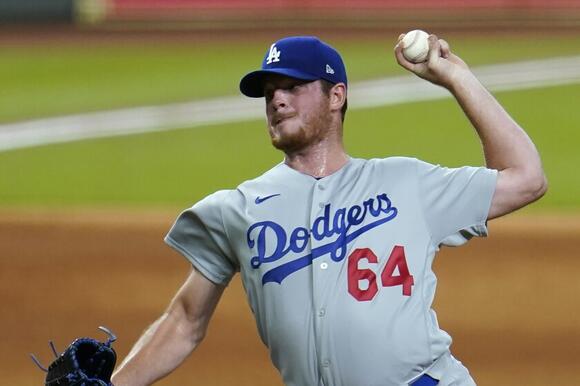 After the Dodgers placed Caleb Ferguson on the injured list this week with left forearm tendinitis, manager Dave Roberts said the left-handed reliever “wasn’t too thrilled” about the decision.

Sitting in front of his cubicle in the Dodgers clubhouse on Wednesday, a frustrated Ferguson explained why.

Twenty months after his second Tommy John surgery, and having missed all of last season, Ferguson had hoped his role on the team would be back to normal by now.

Instead, after starting the season on the injured list and spending most of the first two months pitching in triple A, this week served as the latest detour in the 25-year-old’s return to full-time play.

While Ferguson said he had been experiencing some soreness in his arm the past couple weeks, he believed he could still continue to pitch.

But the Dodgers wanted to take a more cautious route.

Roberts said the team wasn't comfortable using Ferguson in back-to-back games or three times in four days until the soreness was gone. He acknowledged the current stretch of 20-straight games and the need to trim the pitching staff by one to comply with MLB’s newly implemented 13-pitcher roster limit rule that went into effect this week, factored into their decision-making.

“To give him another [couple weeks], whatever it is, to reset, to get over the hump with the soreness, we just felt it was beneficial not only for him, but for also the other guys in the ‘pen,” Roberts said.

It left Ferguson frustrated and not for the first time in his recovery process.

“There was a lot of things in rehab that kind of got changed around and jerked around,” Ferguson said. “I don’t know. There’s a lot of people involved in it. Everybody has their own voice to speak on it. I don’t know. It’s kind of a hard question without trying to be [a jerk] and call a bunch of people out.”

Ferguson has been working to return since September 2020, when a torn ulnar collateral ligament ended what had been his best MLB season and required him to undergo Tommy John surgery for the second time in his career.

He watched the Dodgers’ win the World Series from home with his arm wrapped in an ice machine, then missed all of last season while rehabbing.

He came into spring training this year optimistic he would be ready for the start of the season, after facing live hitting all winter. But after making just three Cactus League appearances during camp, he opened the season on the injured list and was sent to triple A in late April for a rehab assignment.

He was finally activated on May 16 to make his first big-league appearance since the injury, but was immediately optioned back to the minors the next day — a move he said had not been previously discussed.

Ferguson did return to the majors on a permanent basis earlier this month and has pitched six times without giving up a run.

But when the pause button was hit again this week by his return to the injured list, he wondered once more why his usage has been so managed.

“I went through a longer rehab process than what I thought — and not really by choice, but that was what the team thought was best for me,” said Ferguson, who is contractually under team control for two more seasons. “I did it. I shut my mouth and did it. And I feel like we’re kind of going back on with that.”

General manager Brandon Gomes, who is with the team in Cincinnati this week, elaborated on the club’s approach with Ferguson and the reasoning for this latest IL stint after being told about the pitcher's comments.

“Part of what makes Ferg great is he’s a competitor and wants to pitch,” Gomes said. “I think he was feeling pretty good, but there was some smoke in there [with the arm soreness]. And just coming off of the second TJ and trying to be mindful of his health, both short-term and long-term … we didn’t feel great about pushing him during this time.”

Trying to weigh short-term decisions against long-term goals is nothing new for the Dodgers — especially when it comes to their pitching staff, which has already lost Walker Buehler, Blake Treinen and Tommy Kahnle to long-term injuries this year.

In Ferguson’s case, Gomes said the club has been trying to balance his workload and make sure “he can pitch the way we would normally pitch guys, want to pitch guys, without putting him in harm’s way.”

Gomes added the team still views Ferguson as a key part of their bullpen, a pitcher they want to be able to rely on as the season progresses.

“When he comes back and gets over the hump here,” Gomes said, “we feel really good about where he’s at.”

Ferguson still seems uncertain of exactly where that hump is, and how much more climbing he’ll have to do to get to the other side.