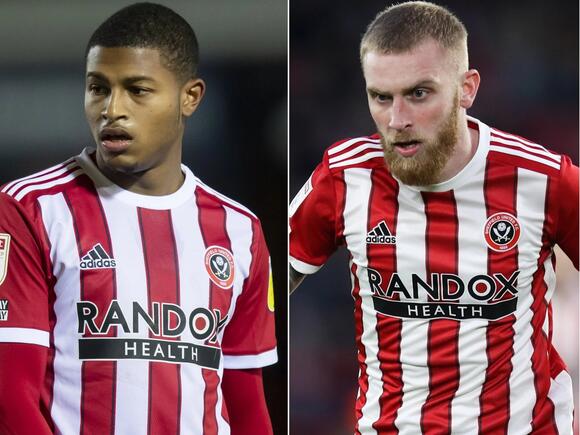 Sheffield United duo Rhian Brewster and Oli McBurnie have been charged after a police investigation into incidents during the club’s Championship play-off semi-final loss to Nottingham Forest.

The Blades said they were “disappointed” to learn the duo face criminal action following an inquiry by Nottinghamshire Police.

It is not yet known what the players are accused of doing.

The allegations relate to the club’s play-off semi-final second leg at the City Ground on May 17.

Forest, who went on to earn promotion to the Premier League, won 3-2 on penalties after the tie ended 3-3 on aggregate.

Home fans then invaded the pitch in celebration, during which Blades skipper Billy Sharp was assaulted and a man later charged.

A Blades statement on Thursday said: “Sheffield United Football Club is disappointed to learn that Rhian Brewster and Oli McBurnie have been charged following the incidents that took place at the EFL Championship play-off semi-final second leg against Nottingham Forest last month.

“Both players voluntarily engaged in interviews with Nottinghamshire Police in the aftermath of the fixture which saw their team-mate, Billy Sharp, the victim of assault in the chaos which followed the final whistle.

“Brewster and McBurnie strenuously deny the charges brought against them and football manager Paul Heckingbottom , who wrote letters to the League Managers’ Association, the Professional Footballers’ Association, the EFL and FA following a number of pitch invasions last month – including one involving Crystal Palace manager Patrick Vieira – is continuing discussions with key stakeholders in a bid to better protect players and staff in their place of work.”

A hate crime investigation has been launched after an elderly woman with cerebral palsy was abused in a lift. A man became aggressive towards the disabled pensioner when asked to wait and use the elevator after her in a shopping centre in Nottingham, police say. The pensioner had told him she was worried about catching Covid.During the altercation, which left the victim ‘distressed’, the man also reportedly made a derogatory comment about the 72 year-old woman’s disability. Have you been affected by this story? Contact zoe.tidman@independent.co.ukPolice have now released images of a man they would like to speak to following...
PUBLIC SAFETY・5 HOURS AGO
The Independent

Erik ten Hag said that he did not introduce Cristiano Ronaldo as a substitute in Manchester United’s 6-3 derby defeat to Manchester City out of respect for the five-time Ballon d’Or winner’s career.Ronaldo was an unused substitute at the Etihad as hat-tricks by Erling Haaland and Phil Foden devastated United, ending Ten Hag’s run of four consecutive Premier League victories.Anthony Martial was instead introduced during the second half, making his first appearance since August after a spell out with an Achilles injury, and scored twice late on to reduce the arrears.Ten Hag revealed that he brought Martial on with the...
PREMIER LEAGUE・22 HOURS AGO
The Independent

Is Leicester vs Nottingham Forest on TV? Kick-off time, channel and how to watch Premier League fixture

The Premier League futures of Leicester and Nottingham Forest, and the futures of the clubs’ coaches may hang in the balance tonight (Monday 3 October).Leicester sit rock bottom in the league with one point and zero wins from seven matches, their last game ending as a 6-2 demolition by Tottenham before the international break.Meanwhile, newly-promoted Forest are 19th in the table with one win, one draw and five defeats so far this season, last year’s Championship rivals Fulham having edged past Steve Cooper’s side in a thrilling match last time out.Leicester boss Brendan Rodgers may be running out of time...
PREMIER LEAGUE・40 MINUTES AGO
The Independent

Jurgen Klopp insisted Liverpool are remaining calm about Darwin Nunez’s slow start to life at Anfield after leaving their record signing on the bench for their last three games.The German and his multilingual assistant Pep Lijnders had a long conversation with the Uruguayan, who could cost Liverpool up to £85 million, to urge him not to worry about his struggles to get into the team.Nunez scored on his first two appearances after his summer move from Benfica but has only started one of Liverpool’s last seven meetings as he served a three-match ban for his red card against Crystal Palace,...
PREMIER LEAGUE・1 HOUR AGO

Is Arsenal’s Mikel Arteta the most idealistic manager in the Premier League?

As Arsenal beat Tottenham Hotspur, Mikel Arteta came out with something that might have been as important as the three points. It wasn’t any talk of a title race, or anything as superficial as a message to the rest of the Premier League.It was instead an instruction to his players.Because, as commanding as Arsenal’s 3-1 win ended up looking, it didn’t quite feel like that at half-time. The game still felt fraught with risk at that point, primarily because of Arteta’s intentionally high line and the counters that invited.Given how the defeat by Manchester United went, with the same pattern,...
PREMIER LEAGUE・1 HOUR AGO
The Independent

Cristiano Ronaldo’s unhappy season at Manchester United continued as he remained on the bench throughout defeat to Manchester City, prompting former captain Roy Keane to accuse the club of disrespect.The Portugal great remained a Manchester United player following a summer of speculation around his future but has started only one Premier League game this season with his only goal coming in the Europa League against Sheriff Tiraspol.Here, the PA news agency assesses Ronaldo’s impact in his second spell with United, and how it compares to his first.Shooting starThe final three seasons of Ronaldo’s first spell at Old Trafford, in which...
PREMIER LEAGUE・52 MINUTES AGO