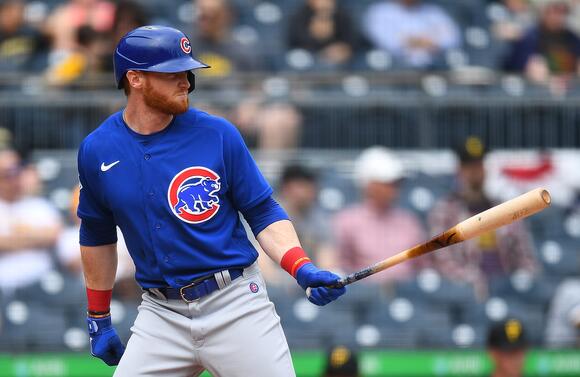 The Clint Frazier Era is coming to an end. Don’t worry, the Cubs minor-leaguer isn’t retiring. He just wants you to call him Jackson from now on.

Who knows when we’ll see Frazier back in the majors—he recently accepted an outright assignment to Triple-A Iowa. But when Frazier returns, perhaps as a September call-up, he’d like to be known as Jackson, which is actually his middle name. Frazier, who was hitting .216 at the time of his demotion, says friends and family have been calling him Jackson for years, though changing his name, at least in a professional setting, didn’t occur to him until now.

Frazier’s former Yankees teammate, Giancarlo Stanton, underwent a similar rebrand early in his career after breaking into the big leagues as “Mike” Stanton in 2010. Before he rose to prominence with the Boston Red Sox, David Ortiz was known as David Arias, finally speaking up after years of going by the wrong name. Apparently the Mariners, who signed him as an international free agent, weren’t familiar with Spanish naming customs, mistakenly calling him by his middle name.

Chosen with the fifth pick of the 2013 MLB Draft and promptly signed to a $3.5-million bonus, Frazier’s career has not gone according to plan, underwhelming in his 852 plate appearances at the major-league level (.238/.329/.427 with 29 homers and 246 strikeouts). Frazier had been looking forward to facing his former team earlier this month, but was DFA’d hours before the Cubs began a three-game series at Yankee Stadium, returning to the Bronx for the first time in eight years.

So far, Frazier has made the most of his minor-league opportunity, going 6-for-12 with two doubles and four RBI since joining Iowa.

Evan Roberts of the Audacy Original Podcast “Rico Brogna” dug into the New York Mets’ issues, placing blame on the front office for a lackluster trade deadline costing them the NL East and potentially a playoff run.
QUEENS, NY・10 HOURS AGO
The Associated Press

CHICAGO (AP) — Tony La Russa stepped down as manager of the Chicago White Sox on Monday because of a heart issue, ending a disappointing two-year run in the same spot where the Hall of Famer got his first job as a big league skipper. La Russa, a three-time World Series champion who turns 78 on Tuesday, missed the final 34 games with the underachieving White Sox. He left the team on Aug. 30 and doctors ultimately told him to stay out of the dugout. La Russa has a pacemaker implanted in February and doctors later found another heart problem that he has not detailed. “It has become obvious that the length of the treatment and recovery process for this second health issue makes it impossible for me to be the White Sox manager in 2023,” he said in a statement. “The timing of this announcement now enables the front office to include filling the manager position with their other offseason priorities.”
CHICAGO, IL・24 MINUTES AGO
Audacy

Rougned Odor lends a hand, helps former teammate Jose Trevino get something out of his eye

Orioles second baseman Rougned Odor enjoyed a wholesome moment with Yankees catcher Jose Trevino Friday night, helping his former teammate get something out of his eye.
BRONX, NY・2 DAYS AGO

Red Sox CEO Sam Kennedy on LeBron saying he ‘hates’ Boston: ‘LeBron has his own opinions’

Red Sox CEO Sam Kennedy addressed recent comments made by Lakers All-Star LeBron James, doubling down on his hatred for Boston despite being a minority owner in Fenway Sports Group.
BOSTON, MA・2 DAYS AGO
Audacy

As NFL RedZone cut to a double box Sunday, host Scott Hanson made sure to inform viewers that a second football game was coming in, not a live look at Judge’s latest at-bat.
NFL・1 DAY AGO
Audacy

'Petty' Patrick Mahomes was back and better than ever against Buccaneers