Kurt Vile wants to be a stay-at-home rock dad 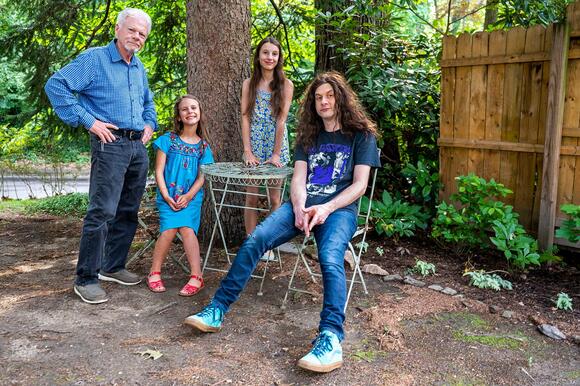 PHILADELPHIA — Kurt Vile is giving a tour of OKV Central, the basement studio in his stately Mount Airy home where the Philadelphia rocker recorded much of his new album, “(Watch My Moves).”

The rock star puts a Robert Johnson cassette on his four-track tape player and explains to his daughter Delphine that he owns not just one, but both Neil Young “Archives” box sets, “because that’s how I roll.”

Putting down a guitar, he shows off a canister of commercially sold CBD hemp flower. “I got this ridiculous stuff,” he says. “It’s called Dad Grass.”

Indeed he is. And on “(Watch My Moves),” his ninth studio album and first since signing a major label deal with Verve Forecast records, dad-ness is on display.

The cover of his most at-home-in-Philly album pictures Vile sitting on a footbridge in nearby Wissahickon Valley Park, wearing a crocodile mask and flanked by Delphine, 10, and her sister, Awilda, 12.

The mask — picked out by Delphine — hides the flowing locks that have helped make Vile the face of Philly’s thriving indie-rock scene. But still, when he wore it for Halloween and took the girls out trick-or-treating, Awilda says, “everybody knew who he was.”

The “(Watch My Moves)” LP opens up to reveal Vile, 42, unmasked with his daughters in the Wissahickon. The artwork is dotted with Polaroid pictures taken by their father of the girls, who are home-schooled by Vile’s wife, Suzanne Lang.

Fans are familiar with the youngest family members from the Team Joe Sings video Vile recorded in 2020 for the Biden campaign. Delphine played drums on Neil Young’s “Heart of Gold.” Awilda took lead vocals on Gillian Welch’s “Wayside / Back in Time.”

“They animate my world,” Vile says of his daughters.

Vile wrapped up an initial tour for “(Watch My Moves)” with two sold-out shows at Union Transfer with his band, the Violators, this month. “It’s great to be back in Philly,” he blurted out. “It’s where I’m from!”

“(Watch My Moves)” doesn’t only highlight Vile as a proud dad to Awilda and Delphine, who both play the harp (taught to them by Philly musician Mary Lattimore) and speak Mandarin (taught by their mother, who Vile says “is a genius”).

The album also acknowledges Vile’s father, Charlie Vile, who worked as a SEPTA train operator for 27 years before retiring in 2010, on the song “Flyin (like a fast train).” The video features Kurt Vile — who is the oldest son in a family of 10 children — riding an empty rail car and walking lonesome SEPTA train tracks.

So when Vile sat down to talk in the family sunroom, he shared a couch with his daughters, with his father in a chair beside him.

The sisters are fans of their dad’s hypnotic, hallucinatory guitar rock. “Delphine plays piano and sometime I leave the room and I start hearing my licks,” he says. “And sometime I hear her own licks, and I’m like, ‘Wow, where do you come up with that?’ ”

The girls each have their own taste. “I like the B-52s,” says Delphine. Awilda cites Adele and Norwegian alt-pop star Aurora as favorites.

Vile played trumpet before his father shifted the direction of his music career on his 14th birthday, gifting him with a banjo. His artistic inclination, he says, partly comes from living in a crowded house: There were five boys in one bedroom, with two bunks and one trundle bed. “Most people have their ways of just getting into their own world.”

Charlie Vile was a fan of bluegrass acts like Bill Monroe and Ralph Stanley, and he and his wife, Donna, would take the family the Delaware Valley Bluegrass Festival in New Jersey.

“He surprised me by asking for a banjo,” Charlie Vile recalls. “No, I didn’t,” his son contradicts. “I wanted a guitar.”

The two squabble, but it worked out in the end. Kurt heard the banjo on Beck’s 1994 album “Mellow Gold” and decided the instrument wasn’t that uncool after all. The songwriter put an old picture of his father on the cover of a 2009 release of home recordings called “God Is Saying This to You...”

His music teacher Joseph Todaro showed him how to play chords from songs by Pavement and Smashing Pumpkins. He also introduced him to Creedence Clearwater Revival, and soon the KV aesthetic that melds classic rock with 1990s alternative was born.

It can be heard on his new album’s smartly chosen cover of the Bruce Springsteen rarity “Wages of Sin,” and in the Violators’ live show, in which the roiling guitar sound bears the influence of Dinosaur Jr.

Kurt Vile songs tend to circle back on themselves, like philosophical riddles. The creative process often becomes part of the creation.

“I wrote this song drivin’ from Philly to Amherst,” he talk-sings on “Say the Word.”

That meta quality is also present in best-loved older songs like “Pretty Pimpin’,” which Keith Urban put on a 5 Songs I Wish I’d Written list for Rolling Stone magazine and said “it sounds like pure stream of consciousness.”

The easygoing quality also suffuses “Wakin on a Pretty Day,” the 2013 hit whose lyrics are illustrated on the Kurt Vile mural in Fishtown painted by Steve “ESPO” Powers when the Vile family resided in Northern Liberties, before moving to Mount Airy in 2016.

That song’s title rhymes with the lyric “don’t know why I ever go away.” “Kurt’s basically a homebody,” his father says, “who has to leave to go to work.”

The guitarist was building his own studio already when the pandemic hit. The break gave him the opportunity to complete OKV Central, which is named in homage to Hillbilly Central, the Texas facility owned by Tompall Glaser where Waylon Jennings did much of greatest best work.

The long break also led Vile to reassess his priorities, and limit his long runs of touring dates.

“I’ve always been traveling physically,” he says. “But I’ve traveled enough.” He cites the title of the memoir by Wilco’s Jeff Tweedy, “Let’s Go (So We Can Get Back)” as a guidepost, as well as Willie Nelson’s song “Still Is Still Moving to Me.”

“Now, I feel like when I’m just sort of listening to music or writing music, I’m traveling, too,” Vile says. “It used to be that I had to go away to record as well as tour, but now I can stay here and do that. So from now on, I’m staying home as much as possible.”