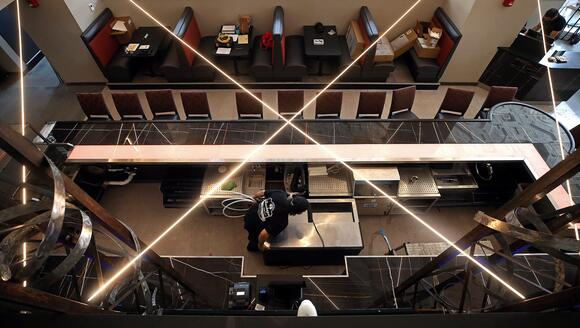 Servers were training with the chef in the main dining room and owner/chef Aaron Hervey was prepping an Akron-style giardiniera appetizer with pickled peppers and olives in the kitchen late last week in preparation for the new Crave's soft opening this week in downtown Akron.

Preparations are in the final stages at the restaurant's new location at the Landmark Building in downtown Akron, a space that Hervey stresses has dramatic upgrades as part of the Bowery development at Main and Bowery streets.

The restaurant, which moved from its former location on East Market Street two long blocks down to 156 S. Main St., has expanded from 5,000 to more than 8,000 square feet in its new, two-story space that formerly housed the Akron Savings and Loan. With the move, Crave's seating increases from 212 to 313.

Hervey, who ran Crave for nearly 17 years on East Market  before the move to the Landmark Building, co-owns the restaurant with his wife, Dana, who manages the front of house.

Both are 50 and have been in the restaurant business for 21 years. The couple also own Crave Cantina in Cuyahoga Falls.

"We were like, 'Let's do it bigger and better and make it count,' " Hervey said Thursday as he showed off the restaurant's new custom first-floor bar, made of black porcelain and stainless steel.

It has a section that Hervey lit up in blue, amid a range of color choices. 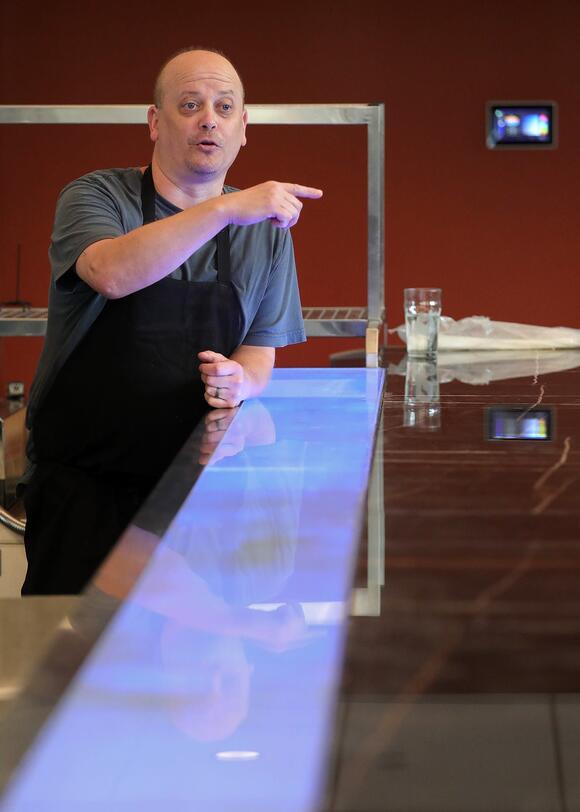 Hervey started talking with Welty Building Co. CEO Don Taylor 15 months ago about relocating Crave to the Bowery District, where restaurant construction started in January. The great location was a big factor for the restaurateur, who cited the 500,000 guests that the Akron Civic Theatre and Lock 3 draw downtown annually as well as a total of about 200 apartment dwellers in the building above the restaurant and across Main Street at The 159.

He gave a tour of the restaurant Thursday in advance of its invitation-only soft openings this Thursday through Saturday and its grand opening Monday.

Crave has built black porcelain and stainless steel bars both downstairs and on the mezzanine level, with the downstairs one framed by two stainless steel sculptures by local artist John Comunale, installed last week. Comunale also created two stainless steel cantilever arms over the first-floor dining booths to hold Crave's handblown glass sconces from Crete that folks will recognize from its former location. 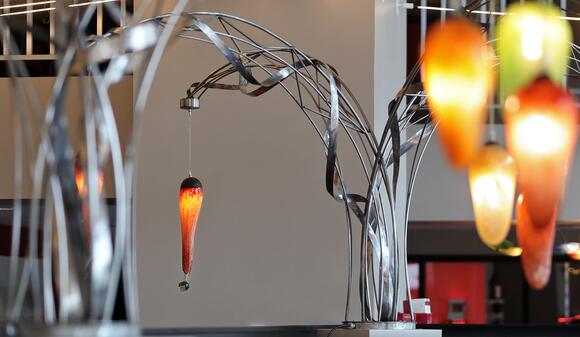 "We knew it was going to be a dramatic upgrade in craftsmanship, but we wanted the flavor of the past to be here," including some of Crave's original sconces in the front vestibule and dining room, Hervey said.

The new space is designed by architect John Wheeler. Because the 99-year-old building can't have any lights anchored from its ornately plastered, restored ceiling, laser-type lights created with LED lighting also are mounted high from wall to wall.

"It's magnificent. From downstairs and especially at night with those sconces washing up on it, it looks like a floating lid," Hervey said of the restaurant ceiling.

New entrees on the menu at Crave restaurant

Jimmy Pintello is executive chef at the new Crave, which features a number of familiar appetizer favorites and entrees that are mostly new.

The restaurant will be open Monday through Saturday for both lunch and dinner. 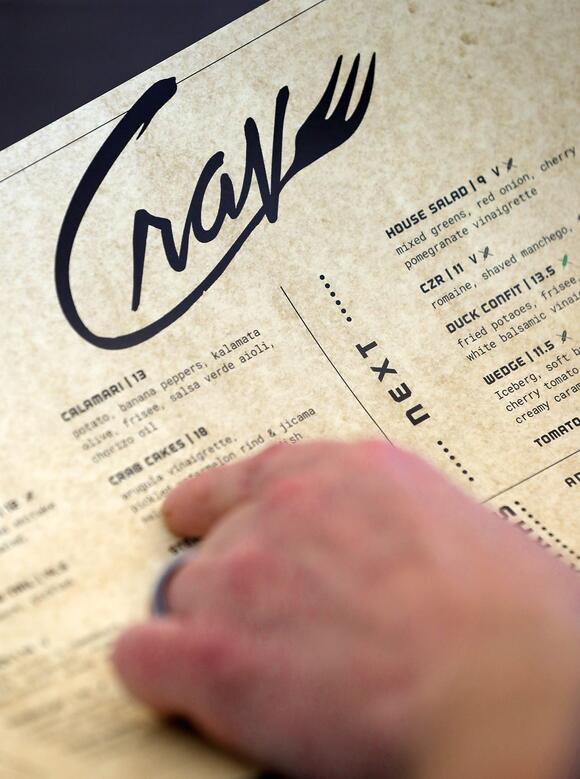 "It's got a lot going on, but together it's amazing," Hervey said.

Appetizers have been "turbo-refined" too, the restaurateur said, including crabcakes with arugula vinaigrette, picked watermelon rind and jicama salad, mustard seed and radish.

"The combination of this is just dynamite," Hervey said.

The restaurant is about 98% staffed, including largely a new crew of servers and cooks. On a weekend night, Hervey expects 25 to 30 staff to be working at once.

A five-car valet zone will be in front of the restaurant. Self-parking is free in the Summit County parking deck on Church Street on weekends and parking is also available at the Cascade deck on Mill Street, which has access to Crave's back entrance.

At the back of the restaurant is a retail wine shop with wine displays that can be seen from the dining room through glass windows. The room also will double as a carryout area. 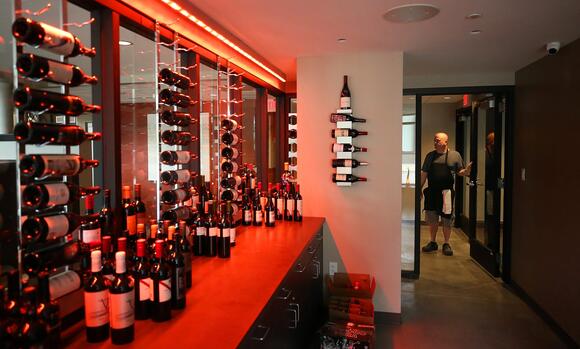 Behind the restaurant in an adjacent hall area will be a grab-and-go market that Crave will run, a requirement of the publicly funded new market tax credits that helped fund the Bowery project. The market will include foods that Crave makes, such as chicken salad wraps, as well as stocked foods including granola bars and apples.

The market will be a convenience for apartment tenants with necessities you'd also find at a gas station, including dishwashing liquid, toilet paper and aspirin. Those who live in the building will have access to the market at all hours, which will be run with kiosks on the honor system.

Crave also has a private dining room in the back corner of the second floor that seats up to 20 with an impressive view of Lock 4. Paintings there and throughout the restaurant are by artist George Roush of Bath, Hervey's longtime friend.

More: Who's the little girl in the Lock 4 mural? Akron's Laila, age 4

The restaurant's seating options also will include seating for 44 with tables and couches on its front sidewalk patio, which will be adorned with flower planters. There, guests can relax with a charcuterie board and a martini.

"The patio's going to be dramatic and awesome and sexy," Hervey said.

Arts and restaurant writer Kerry Clawson may be reached at 330-996-3527 or kclawson@thebeaconjournal.com. 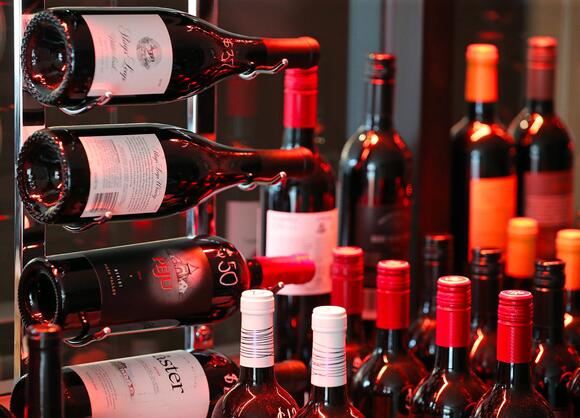