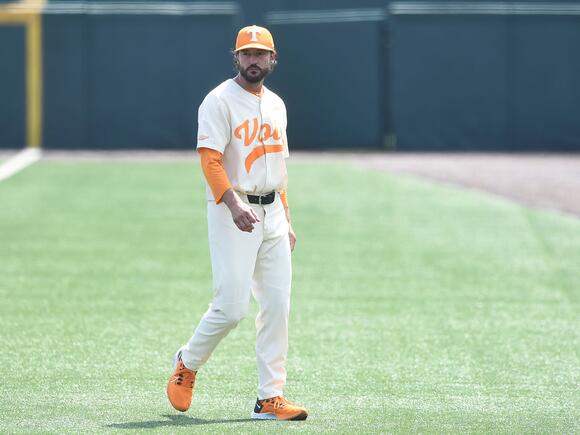 My readers have never hesitated to take the road less traveled. Nonetheless, I was still surprised to see one of my wordsmiths taking Tennessee baseball coach Tony Vitello to task.

He’s one of the most popular coaches in school history and has lifted Tennessee baseball to unforeseen heights in five years on the job.

But he's not perfect, as one of my readers proves with a brutally harsh -- but nicely crafted - critique.

Carole writes: Vitello's rare self-deprecation does not erase his all-season arrogance and rude, crude behavior, his true lack of character. UT and the players deserved better. The game of baseball deserved better.

My response: Vitello is an emotional coach between the lines. But he’s hardly the first coach to bump an umpire in the heat of battle.

He’s the best thing to happen to Tennessee baseball. And he not only cares deeply about his team but the community as well.

His team might have played with a “we’re-better-than-you-are" attitude (in most cases they were). But if I ranked coaches I've known on arrogance, he would be near the bottom of the list.

He once texted me to say he would be five minutes late for a phone interview. Who does that?

Tennessee and Knoxville are lucky to have him.

Shemp writes: Rick Barnes could learn something from Vitello about accepting accountability for a team’s failure to perform to expectations and ability.

Unfortunately, there seems to be a run of “One and Done”  Barnes disease among UT coaches and teams in tournaments.

He apparently is running a school for the coaches on how to prepare for offseason play.

My response: Things could be much worse.

UT baseball was the worst in the SEC before Vitello arrived. Barnes won 57 games combined in the 2017-18 and 2018-19 seasons. No other UT's men’s basketball coach can match that.

Marc writes: I am so disheartened for these exceptional VOLS, and we must give all credit to Notre Dame for beating us.

However, I read somewhere (perhaps in a column in Sports Illustrated)  that the composition of Notre Dame’s team included a very large percentage of graduates and graduate students.

My response: Notre Dame fielded a very experienced team. However, the Vols weren’t lacking in experience, either.

Notre Dame hit better in the clutch while its relief pitchers got the best of Tennessee batters in two of the three games. Auburn upset higher-seeded Oregon State the same way with great relief pitching and clutch hitting in a super regional .

Mike writes: I find it hard to believe that four SEC teams made the College World Series, but the team that was the regular-season champ and the tournament champ, Tennessee, was sitting at home.  Unbelievable.

My response: Arkansas fans were just as disappointed last season. The No. 1-ranked Razorbacks were favored to win the national championship but lost two close games in their super regional with N.C. State.

Joyce writes: Such a good article on Pat Summitt. I still remember Pat at my Dad’s funeral. She was an amazing lady.

My response: Many people share that opinion. You didn’t have to be a basketball fan to be a Pat Summitt fan.

Ron writes: Very nice article. Pat Summitt was a wonderful coach and lady who made a huge difference in all women’s sports.

My response: Schools can go overboard in honoring former coaches, but not in Summitt’s case. Two statues of her wouldn’t be too much.

John Adams is a senior columnist. He may be reached at 865-342-6284 or john.adams@knoxnews.com. Follow him at: twitter.com/johnadamskns.

Love Vitello, but even the greatest regular season in UT baseball history ended with an underachieving postseason AGAIN!