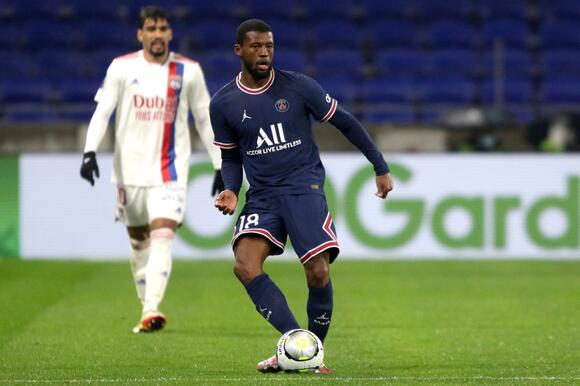 Liverpool are not in talks to sign former player Gini Wijnaldum on loan from PSG according to Fabrizio Romano.

Liverpool are not in talks to sign former player Gini Wijnaldum on loan from PSG according to Fabrizio Romano .

A report on Sunday had claimed that Liverpool were wanting to take the Dutchman on a 12-month loan to act as a stopgap solution as they try and secure the services of Borussia Dortmund midfielder Jude Bellingham in a year's time.

The 31-year-old left Liverpool for PSG when his contract expired last summer after five glorious years at Anfield where he helped win the European Cup and the Premier League title.

He endured a miserable season in France however, failing to establish himself as a regular in Mauricio Pochettino's team before the Argentine exited himself.

This has led to rumours that after just one season at the Ligue 1 club that they may be prepared to listen to offers for Wijnaldum.

Despite many Reds supporters calling for midfield reinforcements, transfer specialist Romano has shot down the links to his former club claiming sources are describing the rumours as 'fake'.

Romano also confirmed that the priority of the Anfield hierarchy remains to sort out a contract extension for Naby Keita who has just 12 months left on his current deal with talks to take place 'soon'.

After Liverpool were knocked out of the FA Cup at Brighton on Sunday, a report has emerged saying that the club are 'scrambling for midfield reinforcements' prior to the closure of the January transfer window on Tuesday. Despite an improved performance at the AMEX, the Reds were undone by a ...
2 DAYS AGO
LFCTransferRoom

The French international was injured during the 2-1 defeat in the FA Cup against Brighton on Sunday.
23 HOURS AGO
LFCTransferRoom

Liverpool were knocked out of the FA Cup after losing to Brighton & Hove Albion on Sunday afternoon.
2 DAYS AGO
LFCTransferRoom

Liverpool are still doing business in the lead to the transfer window closing on Tuesday.
1 DAY AGO
LFCTransferRoom

The French international is out of contract at Stamford Bridge at the end of the season.
1 DAY AGO
LFCTransferRoom

Key player expected to be sidelined for up to two months.
1 DAY AGO
LFCTransferRoom

Liverpool owners FSG are 100 percent committed to the club according to well known journalist.
2 DAYS AGO