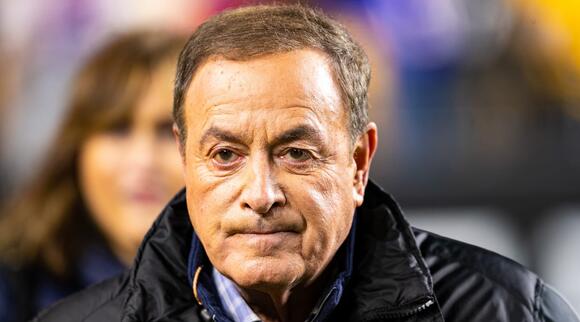 The legendary play-by-play voice weighed in on the quarterback’s reported deal with Fox.

Buccaneers quarterback Tom Brady sent shockwaves through the sports media industry when he agreed to join Fox as the lead NFL analyst following his retirement. Not only was the 44-year-old’s decision ground-breaking, but his reported contract was even more jaw-dropping.

According to Andrew Marchand of the New York Post , Brady agreed to a 10-year, $375 million contract with Fox, earning him an average of $37.5 million annually. The deal would be the most lucrative in sports television history.

Fox did not officially disclose the terms of Brady’s contract.

Legendary play-by-play man Al Michaels took note of Brady’s reported deal earlier this year and recently spoke about it with Peter King of NBC Sports . The 77-year-old broadcaster expressed some skepticism about the contract being exclusively for calling games, but said he that he had no issue with the seven-time Super Bowl champion raking in a massive payday.

“The Brady deal, I don’t know whether the number is right,” Michaels told King. “I don’t know whether he’s a brand ambassador, whatever that’s supposed to mean. It can’t just be for doing games. It has to be other stuff. In a way, this is just the way it’s gone.

“I’ve always felt that the ruination of somebody especially if you’re on a team and the guy at the next locker is making $500,000 more than you and you’re all pissed off about that. Why? We’re all doing pretty well. Enjoy it. Especially at this point of my life, I mean, great. More power to anybody who can get whatever they get. That’s what the market will bear.”

Michaels himself benefitted from a boom in the sports broadcasting world this NFL offseason. The longtime NBC play-by-play voice departed the network to join Amazon for the entity’s new Thursday Night Football package. According to Marchand, Michaels signed a deal in the “Joe Buck neighborhood,” earning a five-year, $75 million deal with Amazon.

The Carolina quarterback had a bold reply to the response the offense received during Sunday’s home loss to Arizona.
CHARLOTTE, NC・15 HOURS AGO
Sports Illustrated

Steelers’ Mitchell Trubisky Reacts to Being Benched vs. Jets

After the offense sputtered on Sunday, the quarterback was replaced by rookie Kenny Pickett.
PITTSBURGH, PA・18 HOURS AGO
Sports Illustrated

We Need to Talk About DK Metcalf’s Bathroom Break

There’s a lot of analyze about the Seahawks wide receiver getting carted to bathroom.
SEATTLE, WA・48 MINUTES AGO
Sports Illustrated

The quarterback’s wife was not pleased to see the opinion published by a reader of the Kansas City Star.
KANSAS CITY, MO・1 DAY AGO
Sports Illustrated

The 33-year-old defensive end revealed he had his heart shocked back into rhythm earlier this week.
SAINT LOUIS, MO・23 HOURS AGO
Sports Illustrated

Pats Turn to Third-String QB After Brian Hoyer Gets Injured

The free agent wide receiver continues to make headlines off the field.
NFL・1 DAY AGO

Veteran Mitchell Trubisky was benched in favor of rookie Kenny Pickett in the second half.
PITTSBURGH, PA・19 HOURS AGO
Sports Illustrated

The NBC show had some fun with Eli and Peyton Manning on its latest episode.
NFL・1 DAY AGO
Sports Illustrated

His new counsel said he doesn’t believe the former quarterback should be indicted.
MISSISSIPPI STATE・1 HOUR AGO
Sports Illustrated

The 74-year-old shared the news on Fox’s Sunday pregame show.
NFL・23 HOURS AGO

Believe it or not, Geno Smith is pretty good

Quietly, the Seahawks’ quarterback is proving his coach made the right decision. Plus, more on the double-doink in London and the Chargers winning without two of their stars.
SEATTLE, WA・1 HOUR AGO
Sports Illustrated

The Dolphins quarterback suffered a concussion on Thursday night against the Bengals.
NFL・20 HOURS AGO
Sports Illustrated

The move marks her first full-time foray back into basketball coverage since her departure from ESPN in 2021.
BASKETBALL・2 DAYS AGO