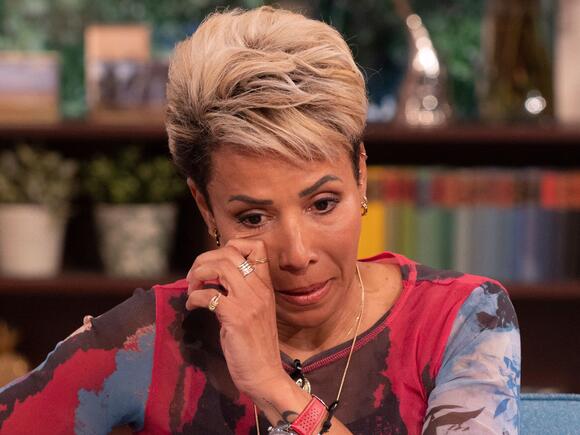 Dame Kelly Holmes has said she can finally be “happy” after coming out as gay over the weekend.

In an appearance on This Morning on Monday 20 June, the former Olympic athlete and British Army member said she feels a “mixture of relief and apprehension” after opening up about her sexuality .

Holmes revealed her sexuality in an interview with The Mirror on Saturday 18 June, telling the publication that she could “explode with excitement”.

“I needed to do this now, for me. It was my decision. I’m nervous about saying it,” she said.

“Sometimes I cry with relief. The moment this comes out, I’m essentially getting rid of that fear.”

Speaking to ITV This Morning hosts Philip Schofield and Holly Willoughby ahead of her upcoming documentary, Dame Kelly Holmes: Being Me , Holmes said the reaction on social media was “amazing”.

“This is such a big step for me to be open and honest with the true me,” she said.

“I needed to talk about this for myself, for my own wellbeing and mental health.

“I’ve never said that ever, that I’m a gay woman, publicly on TV. People don’t realise how hard it is to say that word. I’m not ashamed and I’ve been it since I was 18 but it’s really hard.”

Both Holmes and Schofield – who came out as gay in February 2020 – were moved to tears as they discussed the impact of having to hide their sexuality and how publicly coming out can help others.

“It’s not that long I sat in exactly that place,” Schofield said. “Every single time somebody does this publicly and makes it OK and proves that it is OK then that makes it easier for other people.”

Holmes also reflected on serving in the Women’s Royal Army Corps at a time when the military banned gay people from its ranks. Gay people have been allowed to serve openly in the armed forces since 2000.

“I grew up with that fear in my head because I absolutely loved being a soldier in the army,” she said.

She claimed the Royal Military Police would “carry out raids”. “All they were trying to find is if there were any evidence that you might be [gay],” she said.

Speaking of the impact of finally coming out, Holmes said: “I am relieved to finally do it, but it’s hard to unravel everything.

“The responses are really helping me; I might not look it. It is the final thing of releasing myself and live my life.”

Holmes also revealed that she is in a relationship but did not disclose any details about her partner.

Daniels shared a statement via the club on 16 May, writing that he had been “hiding the real me and who I really am”.

“I’ve known my whole life that I’m gay, and I now feel that I’m ready to come out and be myself,” Daniels said.

“It’s a step into the unknown being one of the first footballers in this country to reveal my sexuality, but I’ve been inspired by Josh Cavallo, Matt Morton and athletes from other sports, like Tom Daley, to have the courage and determination to drive change.”

Dame Kelly Holmes: Being Me airs on ITV on Sunday 26 June.

The daughter of a star from The Sopranos has tragically died, just three months after giving birth to a baby girl. Odele Ventimiglia, the daughter of actor John Ventimiglia, passed away on 12 January with a cause of death not yet confirmed publicly. The sad news was confirmed by family...
20 HOURS AGO
The Independent

When people accused me recently of criticising Prince Harry and Meghan Markle for “profiteering” from my grandfather’s name, I was shocked. Because it was false. I had never accused Harry and Meghan of doing this.Instead, I was misquoted, leading to global news coverage that weaponised my name – and the name of my grandfather, the late anti-apartheid activist and first president of South Africa, Nelson Mandela – to target a woman of colour.It is true that I feel terribly disappointed whenever the Mandela name or face is used for commercial purposes without any benefit to vision he stood for.But...
19 HOURS AGO
The Independent

A Boy George superfan has splashed out a whopping £20,000 pounds on plastic surgery to look like his idol. Liam Halewood, 36, had 10 different facial surgeries to make himself resemble the singer, on top of hair transplants and skin peels. This video shows the Blackpool entertainer performing on stage as a crowd cheers him on. "Boy George is iconic - the LGBTQ+ community wouldn't be where we are today if it wasn't for people like Boy George coming out," he said. Click here to sign up for our newsletters. Read More The imposter in Congress | On The GroundDolphins glide through Floridian waters in stunning drone footageSandi Toksvig condemns Church of England's 'Orwellian' approach to LGBT+ community
10 HOURS AGO
The Independent

Voices: Rod Stewart paying for medical scans – what’s next? Ant and Dec taking out your appendix?

There’s been a lot of fearmongering around the NHS over the past 10 years or so. People coming out of the woodwork, talking about how if we voted Tory or allowed Brexit to go through then we’d all find ourselves waiting months for routine operations that we’d ultimately end up having to pay for. Politicians like Jeremy Corbyn banging on about secret Tory documents, filled with insidious plans about privatisation. Scary buzz phrases like “managed decline” and “US-style healthcare” and “letting working class people suffer to pop a stock price” being bandied around by people who don’t know what...
10 HOURS AGO