Dame Kelly Holmes hopes being open about her sexuality will bring contentment to her life as she admitted: “I don’t feel I have ever been happy.”

Holmes, 52, who won Olympic gold in the women’s 800 and 1500 metres at the 2004 Games in Athens , says she feels as though she is finally “releasing herself” after coming out as gay over the weekend.

In an interview with ITV’s This Morning programme, Holmes said: “I became a self harmer, I didn’t want to be here frankly at some points in my life. 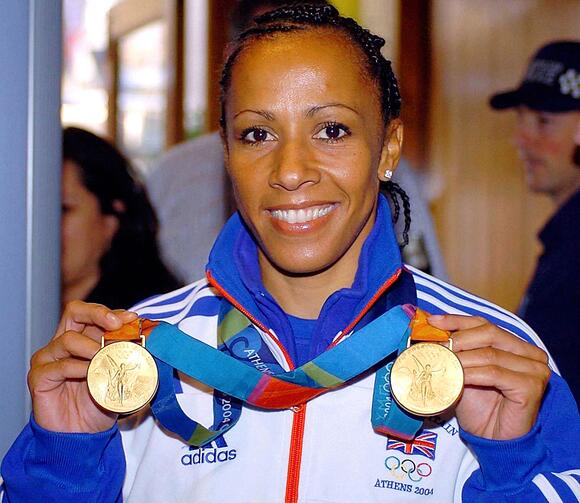 “I am relieved to finally do it, but it’s hard to unravel everything, so I know the relief will come gradually.

“The responses are really helping me, but it’s that relief and that final thing of releasing myself to have my life. I can honestly say I don’t feel I have ever been happy.”

This Morning presenter Phillip Schofield asked Holmes if she thought she could be happy now, and she replied: “Yes.”

You’d put everything into a box that was anything to do with your sexuality, into a box and hide it in the boot of a car.

Holmes’ story is told in an ITV documentary, ‘Kelly Holmes: Being Me’, which airs on Sunday.

She told This Morning that being in the military, where homosexuality was banned until 2000, made coming out even more difficult.

“You can’t change who you are,” she said.

“So I grew up with that fear in the head because I absolutely loved being a soldier in the army. It was something that I really wanted to do. 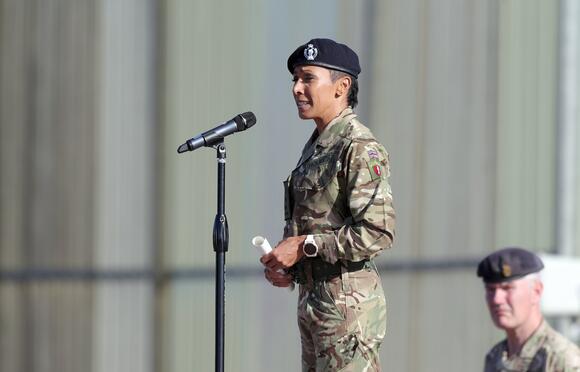 “I was in there for nearly 10 years and yet I couldn’t express that. It was really difficult, because there was interrogation that happened.

“In the documentary, I explain it a lot and I speak to people that dealt with some shocking things, but for me personally, having raids, it was scary, humiliating, embarrassing.

“ People were tipped off, the Royal Military Police would come into your barracks and literally turn everything upside down, take everything out, you’d be left with your belongings laying around. They were trying to find any evidence you might be (gay).

“If you got tipped off… you’d put everything into a box that was anything to do with your sexuality, and hide it in the boot of a car because you don’t want to risk being court marshalled.”

We live in modern times. Women have the right to do whatever they want, including how to dress. But, where do you compromise and give a little?. A man was put in an unfair situation by his girlfriend. He took his story to the internet. His girlfriend loves dressing up and wearing short dresses which he has no problem with. His boss and his wife are the total opposite of his girlfriend. They are extremely conservative people. (source)
3 DAYS AGO
OK! Magazine

Madonna Bashes Haters At Grammys As Viewers Beg Her 'Plastic' Face To 'Get Off The Stage': 'No One Likes You' — See Pics

Madonna graced her fans with an on-stage arrival at the 2023 Grammy Awards. However, the "Material Girl" singer's haters immediately begged for the cameras to pan away from the artist's absurd ensemble.As she took to the microphone to announce Sam Smith and Kim Petras' performance, the Queen of Pop asked the crowd, "Who wants to start some controversy?" before thanking "all the troublemakers out there" for taking a stand against societal norms.The "Like a Virgin" crooner had her hair tied in two tightly braided buns, as she opted for white button-up shirt, fishnet gloves and a black tie layered beneath...
16 HOURS AGO
The Independent

Valerie Bertinelli says she is ‘over’ her divorce: ‘I’m over the narcissist’

Valerie Bertinelli has opened up about how she has been coping after her divorce from financial planner Tom Vitale was finalised in November.The One Day at a Time star shared her thoughts and feelings in an Instagram video posted on Friday (3 February) and said she underwent an “intensive” physical therapy that works on the body’s connective tissues.“It’s so painful, but there’s a release that happens that’s really helpful,” she said. “I believe that a lot of emotional pain is stored in the body, and I’m doing my best to heal from it in every way – my therapy, my...
2 DAYS AGO
Us Weekly

Tristan Thompson Breaks Silence on Mom Andrea’s Death, Apologizes to Her for the ‘Wrong Decisions I’ve Made in My Life’

Courtesy of Tristan Thompson/Instagram Tristan Thompson honored his late mom, Andrea Thompson, in an emotional tribute — reflecting on his mistakes and the man he hopes to become. “Dearest mommy in heaven, It has been one month since you’ve been gone. I’m in disbelief. I’m in the deepest part of sorrow & grief,” the NBA […]
14 HOURS AGO
Amy Christie

Dad on daughter: "We danced at her wedding, then I said I don't like her husband; she hasn't spoken to me in 2 months"

*This article is a work of nonfiction based on actual events recounted to me by a friend who witnessed them firsthand; used with permission. When your child gets married, memories, hard times, and fun moments come to mind, and as a parent, you can get worried about whether the choice they made is the right one.
2 DAYS AGO
The Independent

Taylor Swift fans had all sorts of reactions to her breaking into her signature dance moves during Bad Bunny’s 2023 Grammy Awards performance.The 65th annual event opened with a performance by Bad Bunny, who was up for three awards at the event, including “Album of the Year”. While the singer was onstage, some of his dancers joined the attendees in the audience.Swift was one of the many stars who danced along to the singer’s music and was seen moving along to the music in her seat. She also got up to dance with two of Bunny’s dancers.On social media,...
16 HOURS AGO
The Independent

Australia’s Channel Nine’s Today show accidentally shared red carpet footage of this year’s Grammy Awards of a behind-the-scenes moments.On Monday morning, a livestream from the Los Angeles-based awards show was shared on Today. The stream, shared by the Daily Mail, featured some stars walking on the red carpet at the Crypto.com arena while the Australian program’s co-hosts, Karl Stefanovic and Sarah Abo, discussed the show and its attendees.As the TV hosts talked over the stream, they noted that Beyoncé had yet to arrive before the footage panned over to an assistant on the red carpet.The woman was seen holding...
14 HOURS AGO
The Independent

The Princess of Wales has posted a throwback family photograph of herself as a baby with her father, Michael Middleton.The sweet snap shows baby Kate Middleton smiling and reaching out to grab her father’s face. It was released as part of Kate’s new Shaping Us campaign to highlight the importance of early years development.Shared on the official Prince and Princess of Wales’ Twitter account, Kate wrote in the caption: “’Faces are a baby’s best toy’. On Tuesday we launched Shaping Us to raise awareness of the vital role our early years play in shaping the rest of our lives.”She...
2 DAYS AGO
The Independent

Matthew McConaughey becomes next star to take on Elvis, this time as a secret agent

Matthew McConaughey is taking on The King in Netflix’s forthcoming animated adult series Agent Elvis. On Monday (6 February), the streamer announced McConaughey’s casting on Twitter, along with its first official sneak peek.“Elvis Presley always dreamed of being a superhero – now, Priscilla Presley is making his dream a reality!” the post read. “Matthew @McConaughey stars in Agent Elvis, a new animated series created by Priscilla Presley and John Eddie. Premieres March 2023.”The show will follow Elvis, who’s a lucrative singer by day, turned secret government super-spy by night. “Every once in a while, man accomplishes the impossible. All...
45 MINUTES AGO
The Independent

A gladiator-themed challenge is set to cause some friction between the Love Island contestants in tonight's episode (6 February).After having water spilled onto her during the challenge by Samie, Olivia appears irritated, wondering whether the two have an "issue."In Sunday's explosive recoupling, Lana Jenkins decided to pair up with newcomer Casey O'Gorman over Ron Hall. Tonight's first look shows that tensions may be brewing as the two compete for the makeup artist's affections.Click here to sign up for our newsletters. Read More Love Island first look: Maya Jama arrives in villa to announce surprise dumpingMolly Mae and Tommy Fury lovingly cuddle newborn daughterLove Island first look: Olivia confronts Tom over secret kiss with Ellie
54 MINUTES AGO
The Independent

Carol Vorderman has condemned LBC presenter Nick Ferrari for using “humiliating” language to describe parents who are unable to afford toothbrushes and toothpaste amid the rising cost of living.Speaking on his LBC radio show on Monday morning (6 February), Ferrari responded to new research that revealed four out of five teachers in the UK have given oral hygiene products to students.He said: “If you are a mum and, or a dad, and you haven’t got money to buy your child a toothbrush, you should never have become a parent in the first place.”Ferrari has been widely criticised for his...
2 HOURS AGO
The Independent

Dizzee Rascal song removed from King’s coronation playlist, after it was included in ‘error’

A Dizzee Rascal song has been removed from a government playlist after it was added in “error” following his assault conviction.The rapper, whose real name is Dylan Mills, had his song “Dance Wiv Me”. featuring Calvin Harris, added to the new playlist, which was created to celebrate the King’s coronation in May.The playlist addition comes shortly after the grime artist was found guilty of assaulting his ex-fiancé Cassandra Jones. The trial found him guilty in April, and he lost his appeal last week.The song has now been removed from the playlist, says a spokesperson for the DCMS. “The playlist...
3 HOURS AGO
The Independent

Harry Styles has responded to claims he shouldn’t have won the Grammys‘ Album of the Year prize.The singer won several trophies at the 2023 ceremony, but it was his triumph in the evening’s most coveted category, for the record Harry’s House, that has divided music fans.It was widely believed that the award would go to either Renaissance by BeyonceÌ or 30 by Adele, with Style’s win surprising those in the venue, the majority of whom could be heard shouting out Beyoncé’s name.Styles acknowledged the sentiment backstage after being questioned on the subject.“You never know with this stuff,” he said...
2 HOURS AGO